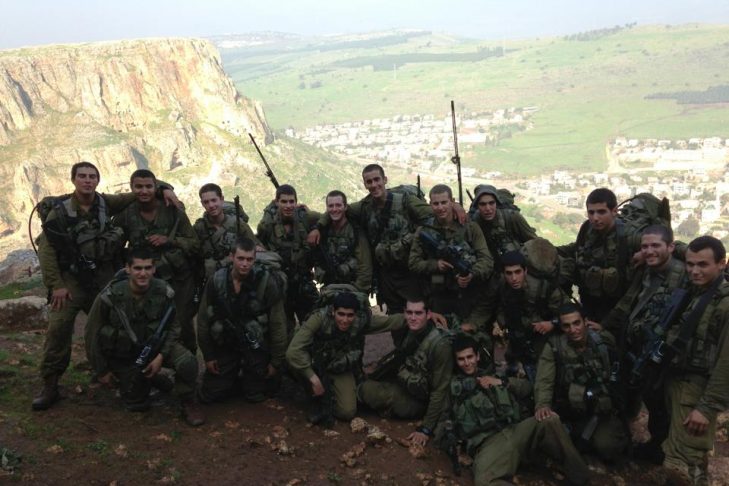 “How did I feel when Jonah made aliyah and joined the Israel Defense Forces?” recalled Fran Liben, attorney and wife of Rabbi Daniel Liben of Temple Israel of Natick. “I felt like I had open heart surgery without anesthesia.”

Jonah served as a Lone Soldier, the designation for men and women who join the IDF but whose families do not live in Israel. About 6,000 Lone Soldiers serve in the IDF. About a third are from the U.S. and nearly half serve in combat units. When their peers go home for weekends and holidays, these soldiers are on their own, although a lot of work is done to alleviate that isolation by organizations such as The Lone Soldier Center and Garin Tzabar Lone Soldier Association.

One recent Shabbat morning, a young man (he’s 23) was honored during the service at Temple Israel a few days before he took off for Israel. He was making aliyah and will serve as a Lone Soldier. When I spoke to the young man’s mother that morning, I could only summon up clichés. As I listened to others, I realized we were all pretty much saying the same thing: “I don’t know if mazel tov is the right thing to say. You must be very proud.” There aren’t many words that adequately cover the intersection of pride and protectiveness.

The parents of this soon-to-be Lone Soldier know their son has taken to heart their Jewish values, especially their love of Israel. Some parents I know who infused their family life with a passion for the Jewish State and whose kids made aliyah have joked that they were too good at it. Even for parents of those who don’t serve, it’s still hard to have your kids, and, for some, grandkids, so far away. Over the past few years, at least nine people from our synagogue have made aliyah. Several have served or are serving in the IDF.

“My son, the sniper. Words I never expected to utter,” said Fran. “On Aug. 16, 2011, our son Jonah boarded a Nefesh B’Nefesh [an organization that supports those who make aliyah] flight, as part of Garin Tzabar, to make aliyah and join the Israeli army. In short order I was exposed to words every Israeli mother knows all too well: Sayerot [special forces], Tzanchanim [paratroopers] and Merkava [a tank used by the IDF]. Strange and scary words. Our son—joyous, loving, warm, smart, iconoclastic, empathetic, philosopher—enlisted in Palchan Nachal, an elite commando unit that specializes in demolition and combat engineering. He was the unit’s sniper.”

Jonah’s unit deployed to the Syrian border after a year and three months of intensive training, including open field combat, urban combat, navigation and anti-terrorism.

At temple that recent Shabbat, I thought of my two children, now young adults, and how protective I still feel about them. And always will! I asked my husband how he might have felt if either of them served. “Proud,” he said, “and scared.”

“How could I not be proud of an idealistic young man who wanted to act on his values, to put his money where his mouth is?” added Rabbi Liben. “Jonah said that he wanted to be a liberal Zionist in Israel because Israel needs more liberal Zionists. He also told us that he was determined to get into a combat unit. I tried not to think about what the words ‘combat unit’ meant. Part of me was frightened as well as humbled, because he was making a choice that I know I never could have made myself.”

Isaac Rodgin of Natick served in the IDF and is now living in Israel.  “Before I moved, I found it hard to support Israel from abroad. Everything sounded scary, exciting and dangerous,” he said. “When I served in the IDF, I gave up the fear, excitement and longing for anything other than a chance to rest! For a brief, or not-so-brief, time, I was committed to a cause and power much greater than myself. I became part of a community of people who were devoted to this cause. I often found myself in awe of the accomplishments our team achieved and the hardships we overcame. The support from my family, the Temple Israel of Natick community, Garin Tzabar and Kibbutz Magen, which houses Lone Soldiers, was invaluable.”

Eli Katzen of Newton served in an airborne search-and-rescue unit in the IDF from 2011-2014. His unit trained as medics and combat soldiers and learned how to access wounded soldiers behind enemy lines, including helicopter extraction, parachuting, scuba diving, mountaineering, detection avoidance, orienteering and endurance.

The Katzens made an extraordinary effort to be there for Eli. “I managed to get a job teaching finance in the business school at Tel Aviv University, so we spent six weeks a year there and got to go to the annual Parents’ Day at the base,” said proud father Josh Katzen. “We were also able to provide Eli with a place to come home to on Shabbat, or, if he was on base on Shabbat, we could visit him and bring lunch.”

The Katzens enjoyed getting to know the parents of the other soldiers in Eli’s unit. “This made the experience more real and Israeli-like for us. The rest of the year, Eli was a Lone Soldier, based on a kibbutz that he had been connected with via Garin Zabar. He also visited his uncles and cousins on Shabbat.” Eli stayed on in Israel for a year and a half after discharge and is now back in the Boston area.

Sometimes the ferocious, unremitting desire to shield our children from harm, mental or physical, is so intense it can be paralyzing. We know, however, that as adults they have to make their own decisions and find their own way…perhaps with a little parental guidance. Even if that means they join the IDF or serve in the U.S. military.

“Five years later, Jonah has fully integrated into Israeli society,” said Fran. “He’s working in Tel Aviv and has a lovely Israeli girlfriend. His IDF service keeps us all safe. I am immensely proud of Jonah and of all the young men and women who sacrifice themselves for the benefit of the rest of us.” Echoing parents everywhere, she added, “I pray for peace every day.”

Even if our sons or daughters don’t serve, those of us in the U.S. can support these brave men and women. Learn more at lonesoldiercenter.com and garintzabar.org.