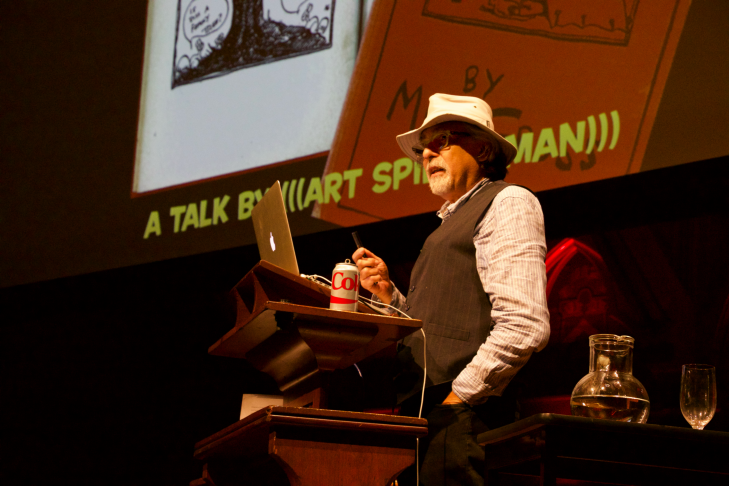 Hours before Art Spiegelman took the stage at Harvard University to give his talk, “Comix, Jews ’n Art? Dun’t Esk!,” he encountered a technical issue: the slides he planned on using for the lecture were lost. Though they were eventually recovered, the order in which they would appear in the presentation was anyone’s guess. And so, Spiegelman, hat on head and armed with a Diet Coke, was left to wing the lecture he so carefully constructed. What followed was a fantastic talk that mixed the Yiddish cadence he reveres with brilliant ad libs. Here are some top moments:

“I studied MAD the way some kids study the Talmud.”

Spiegelman grew up in Queens, the son of two Auschwitz survivors. His discovery of MAD Magazine was transformative. MAD and the search for truth comes down to how “the heart of humor is pain…That was a very important lesson for me.”

“The Trump world is full of cartoon humans.”

From digs about Steve Bannon being one of the hooded klansmen in a black-and-white photograph of the KKK to Trump’s illiteracy, Spiegelman’s off-the-cuff comments on the current administration had the audience in stitches.

“[I have] more of a chance with Scarlett Johansson because she’s half-Jewish.”

Accepting his Jewish identity comes across as a struggle for Spiegelman. Finding your place is more about “identity politics” and ties to the Jewish tribe than you might think.

Not to misunderstand him, Spiegelman is grateful for his successes, the pinnacle of which he said was voicing himself in an episode of “The Simpsons.” Regardless, he still can’t seem to shake the maus on his back—his Simpsons persona dons a mouse mask.

“Lichtenstein did no more for comics than Warhol did for soup.”

This section—”What the %@}*!! happened to comics?”—called out the portmanteau label for co-mixing art and words. Continuing on with “moving beyond literacy,” he pointed out, “it’s not an accident there’s an emoji keyboard on my phone.”