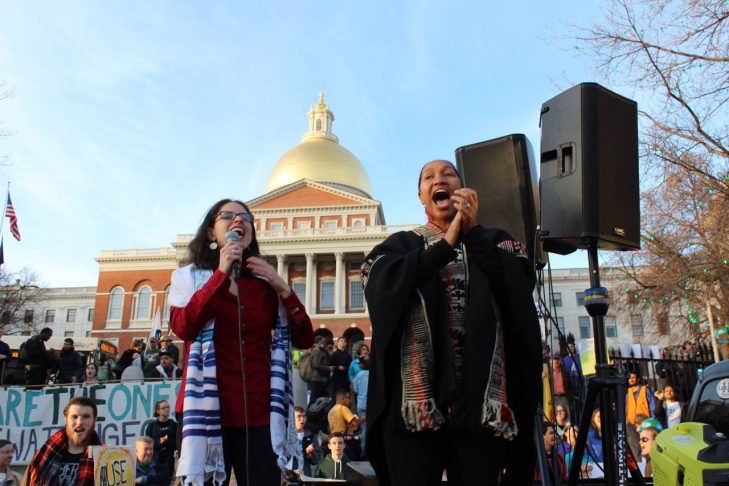 When Rabbi Shoshana Meira Friedman was growing up in Newton, she strongly felt “a call to be of service.” That was the early 1990s, and Friedman, now 34, recently told JewishBoston she was drawn to work in the environmental movement at an early age. An assistant rabbi at Temple Sinai in Brookline and a singer-songwriter, Friedman will be part of “Voices of Hope and Resilience,” an interfaith program on climate change taking place this Saturday evening, Dec. 17, at Hebrew College. The event is co-sponsored by a number of organizations, including Clean Water Action, Jewish Climate Action Network and Jewish Alliance for Law and Social Action. It’s also part of a series of programs related to spirituality and social-justice leadership that has been underwritten by a generous grant from the Rita J. and Stanley H. Kaplan Family Foundation.

Friedman will be appearing with the Rev. Mariama White-Hammond and the Rev. Fred Small, both of whom are also involved in the faith community’s climate movement. The three will sing and play original music, as well as be in conversation with Rabbi Sharon Cohen Anisfeld, dean of Hebrew College’s rabbinical school.

Friedman, a 2014 graduate of the school, embodies the college’s dedication to linking spirituality with activism. After she graduated from Oberlin College with a degree in environmental studies, she had a fellowship with the Jewish Organizing Institute & Network, known as JOIN. “JOIN was an important piece of my story,” said Friedman. “[The fellowship] linked for me the importance of relationships and building love and trust between people. That’s so crucial in building power to nourish our souls as we do Jewish work.”

After her yearlong fellowship ended, Friedman worked for an environmental non-profit with the end goal of studying management and policy in graduate school. “But then I had an epiphany one Rosh Hashanah,” said Friedman. “I realized that what I loved to do was much more in line with being a rabbi than being a policy wonk. I love community, I love prayer and fundamentally I realized that I couldn’t do environmental or justice work secularly.”

Her first post-rabbinical school foray into the climate-justice movement began with attending a People’s Climate Movement march in New York City in the fall of 2014. Shortly after, Friedman was on a panel at Harvard Divinity School on sustainability and faith. “I was representing Judaism. It was total chutzpah on my part to accept this invitation,” she quipped. “I was sitting on a panel with luminaries of the interfaith climate-justice movement, where I listened to them articulate climate-justice work as a devotional practice and the way to witness God’s love of the world.”

Friedman also brings her passion for music to her activism. Last year she and her husband, Yotam Schachter, were invited to an event in Washington, D.C., called “Coming Together in Faith on Climate,” for which she was asked to sing at the interfaith service. “I was contemplating a couple of classics in the justice movement to sing, and then my mom said, ‘You need to write your own song,’” she said. As she drew inspiration from her late grandfather and father-in-law, a line of music came to her.

“I had seen a banner at an event at Harvard University that was trying to get the university to divest of fossil fuels,” Friedman said. “The banner said: ‘The seas are rising and so are we.’” She remembered the line as, “The tide is rising and so are we,” and co-wrote with her husband a song with that title. “The hook of the song is that stuff will be hard about climate change in the future,” she added. “There’s a line in the song that says: ‘The task is mighty, the storm is raging, the tide is rising and so are we.’ I wanted to match the difficulty that is coming with climate chaos with our own internal strength.”

Friedman and Small will be performing “Seeds” on Saturday night. “Hopefully the song is resonant with Standing Rock,” said Friedman, “and the general need to feel resilient in a time of uncertainty in our country.”

Register for the event here.

For more about Friedman’s music and activism, visit rabbishoshana.com.