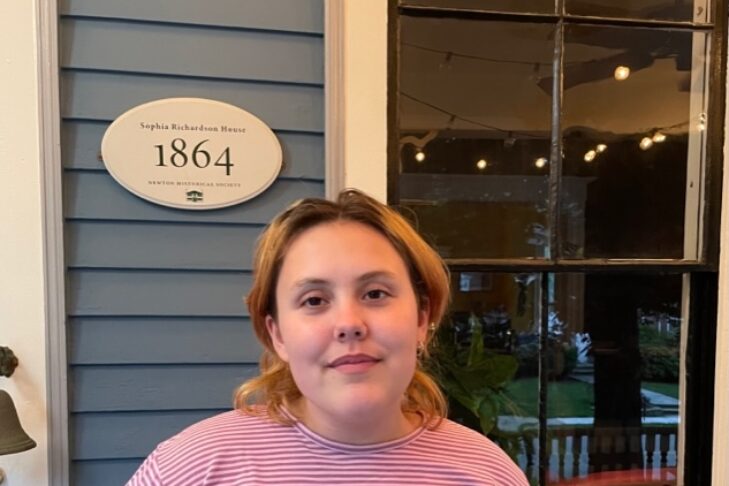 Newton North High School rising senior Lucy Waldorf is next up in our ongoing profile of local Jewish environmental activists. She’s part of Hazon’s Jewish Youth Climate Movement (JYCM), with a focus on writing, culture and rituals. Next year, she’ll be on their executive board, as well as serving as a Jewish ritual and culture leader. It’s a big commitment for a teenager: The group meets several times per month. But she knows it’s worth it.

What was your motivation to become an environmental activist?

There’s so many different causes out there to care about. Why this one?

In my family, specifically, and in my Jewish community, tikkun olam has been really emphasized, as have other social justice values. That’s a tenet of Judaism. I also became involved in the environmental movement at a time where all these big strikes were happening. A lot of people around me were involved, especially when I was going into high school. It was a transition period; you’re trying on these different skins and figuring out what’s important to you. I was in the right place at the right time.

What does Judaism have to do with environmental activism?

Social justice is really highlighted, specifically in my Jewish community. Recently, I’ve been involved in a lot of spaces that are underlining Jewish agriculture and Jewish agricultural practices. There’s this whole beautiful movement of Jewish agricultural revival and people starting up all these small farms. On an environmental side, it’s this idea of localizing our food systems and divesting from all these giant corporations.

On the Jewish side, there’s this whole idea of shmita, or giving the land a rest. Especially in terms of climate change, we’ve really exhausted our resources and exhausted our planet to a point where it’s negatively impacting us along with nature. Obviously, there’s a whole other tangent we could go on about how Western ideas have led to us separating nature and humanity from each other. Personally, a lot of the really spiritual experiences I’ve had within Judaism have been connected to nature and being in these beautiful places that I want to preserve. And that’s one reason that environmental justice is really important to me: preserving nature and taking action to preserve justice.

What are some of your projects and goals?

In terms of this past year, I was working on the JYCM actions team. So there was a lot of focus on holding events and collaborating with other climate organizations. There was a big emphasis on divestment, in terms of calling on specific corporations to divest from fossil fuels. One was in Boston, at the Chase Bank downtown, and it was around Passover. We were calling on Chase and connecting the ideas of Passover by highlighting what we called the “10 climate plagues,” using matzah as symbolism. There were all these beautiful connections of using the Exodus story to emphasize our narrative. The Passover action was through Dayenu [a Jewish movement confronting the climate crisis].

What do you think people your age are most concerned about? Is it climate change?

I think the trouble is that everything intersects. We’ve gotten to a place where things like the climate crisis and racism and antisemitism and all of these things are intertwined. All of these horrors of the world are inseparable. I think there’s just a general idea that the system we have needs to change.

How is antisemitism entwined with climate change?

First of all, there’s this idea that our spaces are being destroyed. There’s a JYCM leader who talks about how she’s from Houston, and her temple was flooded. The places we practice are being destroyed, and Torahs are being watermarked. We’re not able to preserve our tradition if we can’t preserve the world at large. Also, a lot of these giants in the fossil fuel industry were somewhat involved in the Holocaust, unfortunately. And people who are funding against preserving the climate were descended from Nazi sympathizers.

Tell me about how you encourage people your age to make a difference. Is there any hope?

Thankfully, there are so many different organizations to get involved in. You can find your niche. The mindset of climate change is so huge and is this whole existential threat. We need to preserve the idea of creating community and activist spaces that keep us going and providing rest for ourselves. You need to hold those two things simultaneously. To complete the fight, you can’t work non-stop and not find space to find joy and hope and all these important things. You need to have that in order to hopefully mitigate the climate crisis.

I would love to still be involved with the environmental movement, obviously. I think there’s definitely an idea—I try to reject it—but that, if you want to have a career or just be involved in the environmental movement, you have to be a scientist. I’m not a STEM person. I’m much more interested in philosophy, writing and religion. For me, what’s been great about JYCM is I’ve been able to incorporate all these things. Next year we’re having a Jewish ritual and culture working group. I’m really excited to get the opportunity to start. Simultaneously, I’ve been working on a lot more writing projects. We have an annual storytelling summit where we have conversations to say what galvanized us to get involved in the climate movement and in the Jewish climate movement specifically.

How do you feel about the future? Is it scary?

I’m a bit of an existentialist. It’s so absurd and difficult to grasp the gravity of. Frankly, I try not to think about it too much. But I definitely would say I’m optimistic for the community of the future and building communities. JYCM has set a really important framework for me for what it means to hold all these identities simultaneously: Judaism, activism and creating community at large. I feel like I have a much better blueprint now. I have faith in that future, at least.