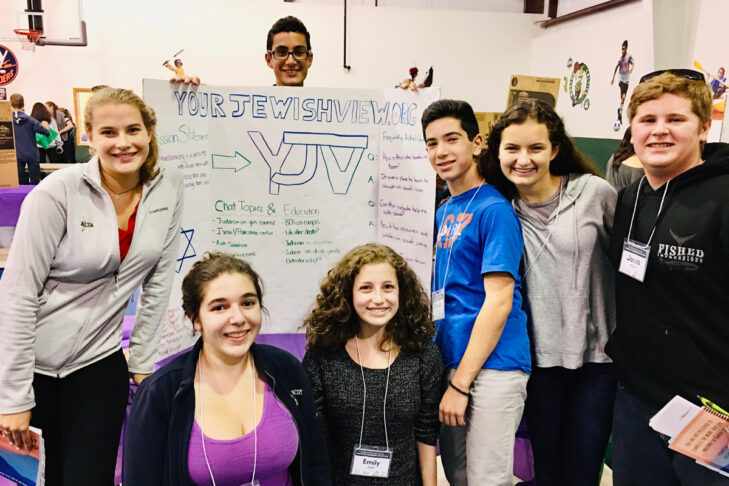 The 2016-17 Jewish Teen Initiative Peer Leadership Fellows form a diverse group of leaders, representing communities, synagogues, camps and organizations throughout the Greater Boston area. They each have unique Jewish journeys with varied backgrounds and will be working to help create a more connected and inclusive community for their peers. Meet the Fellows and learn more about their stories below! 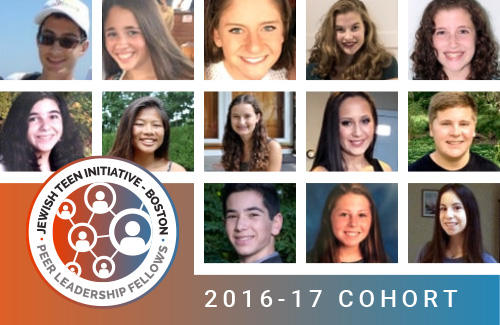 Jacob Abbisso is an honor student at Gann Academy, Class of 2018. A co-director of the Environment Club, Jacob especially enjoys studying science and Hebrew. Since 2008, he has raised money for the Marblehead Animal Shelter and other nonprofit organizations as “The Balloon Kid,” twisting balloons at children’s parties and town events and donating his proceeds. Jacob is a graduate of Cohen Hillel Academy, where he received the 2014 Dr. Bennett I. Solomon Memorial Faculty Award for Menschlichkeit. Jacob is an avid fisherman and boater, plays guitar and practices martial arts. At his temple, Jacob attends post-confirmation classes and loves being a madrikh and b’nei mitzvah/Hebrew tutor. He is excited to share his passion for Judaism as a Sloane Peer Leadership Fellow.

Ben Birnbach is a member of Congregation Shirat Hayam, works as a madrich in its Hebrew school and went to Israel on the Y2I program. He is a junior at Marblehead High School, where he is involved in the Headlight newspaper club and plays on Marblehead’s tennis and soccer teams. Ben loves to ski and fish and is also a poet who has been published twice in Marble Collection magazine.

Morgan Brodsky is a member of Temple Emanuel in Andover and a sophomore at Danvers High School. At school, she is on the cross-country team along with the indoor and outdoor track teams. She also participates in the Tomorrow’s Teachers program and the Student Council and is a member of a dance competition team at Dance Etc. in Middleton. She is in her temple’s confirmation class and has spent the past seven summers at Camp Pembroke. She enjoys traveling and is looking forward to going to Israel for the second time next summer.

Elise Chigier is a junior at The Governor’s Academy in Newbury. There she is involved in Spectrum, an LGBTQ advocacy group. She also trains her peers with the Anti-Defamation League. Over the summer she likes to wakeboard and volunteer wherever she can. She enjoys skiing, drama and theater tech. She loves dogs and photography and is a member of Temple Emanuel.

Maya Goldman is a member of Congregation Shirat Hayam in Swampscott and traveled to Israel this summer on the 2016 Y2I program. As a junior at Marblehead High School, she is a member of the Rotary International Interact Club and the school’s student government. Maya plays JV field hockey and runs on the JV winter and spring track teams. Additionally, she loves to dance. She was a part of the Boston Ballet School for six years and began dancing at the age of 3. Maya is looking forward to being a Peer Leadership Fellow and meeting lots of great people.

Samantha Hano is a junior at Beverly High School. She is involved in several extracurricular activities including Model United Nations and theatrical productions. Samantha also enjoys filmmaking, as well as spending time with friends and family. She is a member of Temple B’nai Abraham in Beverly and is excited to have the opportunity to be a part of a unique group of teens interested in Jewish community outreach.

Averi Kaplowitch spent the summer of 2016 in Israel with Camp Micah, where she has been a camper since 2009. A junior at Marblehead High School, she is involved in student government, Best Buddies, Team Harmony, peer mediation and Young Entrepreneurs and has recently been working with the ADL to bring the World of Difference program to her school in an effort to educate the student body about combating all forms of hate and discrimination. She enjoys playing tennis with her friends, loves to watch “Grey’s Anatomy” and is a huge Patriots fan. She can’t wait to begin working with the other Sloane fellows.

Daniel Kasten is a student at St. John’s Prep in Danvers, where he is a member of the Class of 2019. At SJP, he is involved in the Jewish Student Union and Investment Club and also enjoys playing baseball, basketball, ultimate disc and golf. He volunteers at the Boys and Girls Club in Salem and all around the North Shore through NSTI. In the summer, he attends Camp Tevya and is a member of Congregation Shirat Hayam in Swampscott. An interesting fact about Daniel is that he was photographed in the “Grown Ups 2” movie filmed on the North Shore as a young Adam Sandler look-alike.

Marissa Samuels is a madrikh for Temple Emanu-El and a sophomore at Marblehead High School. There,she is involved in Team Harmony Club and Interact Club and enjoys art and playing tennis.

Michelle Slezinger is a sophomore honors student at Swampscott High School, where she plays on the volleyball team and she is a member of the French Club. She has also been a part of the school chorus for seven years. She is a member of Temple Emanu-El and has been a madricha for the last four years. Over the summer, she enjoyed being an LIT in Nature’s Classroom Adventure Camp.

Rachael Weiss is a member of Chabad of the North Shore in Swampscott and a junior at Swampscott High School. She is involved in the Anti-Bullying Club, the TLC Club and the Peer Leaders Club and enjoys playing on the tennis team. She spent two weeks this summer traveling around Israel with Y2I and met many new friends from all over the North Shore. She enjoys spending time with her friends, volunteering yearly for Special Olympics, taking care of and riding horses and listening to music.

Mae-Lou Zaleski is a junior at Danvers High School and a member of Temple B’nai Abraham in Beverly. She is a varsity football and basketball cheerleader and is also a member of Model UN and SADD. She was adopted from China at the age of 1 and her current interests include photography and literature.

Emily Zieff is a sophomore at Beverly High School. She plays clarinet in marching band and concert band, plays piano and sings. She enjoys reading, writing and listening to music. Emily is a member of Temple B’nai Abraham in Beverly and attends URJ 6-Points Sci-Tech Academy in the summer. She is also very passionate about her photography.