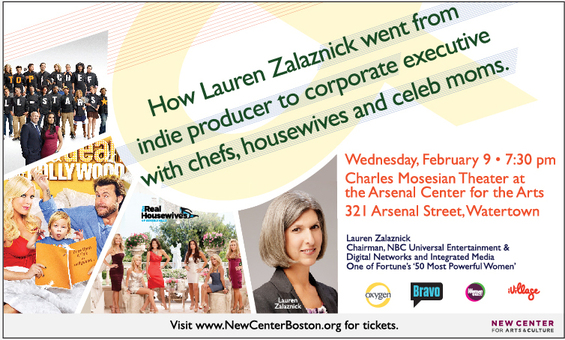 From independent films to pop-up videos to “The Real Housewives,” Lauren Zalaznick has spent her career helping to define pop-culture.  Lauren is best known for taking reality TV – originally thought of a form of entertainment for the masses – and redefining it as chic and hip, aiming for a more affluent audience. In a 2008 interview with the New York Times Magazine, Lauren compared producing independent films and reality TV by explaining that they both require the same sort of resourcefulness. “I’ve got no budget, no stars – but I’ve got to win,” she explained.

Since arriving at Bravo in 2004, Lauren has taken reality constants off of deserted islands and placed them in the sophisticated backdrops of New York City and Los Angles. Instead of eating bugs and running obstacle courses, Bravo’s stars compete by showing off their good sense in fashion, food or design.

Originally known as the network that created “Queer Eye for the Straight Guy,” –  a beloved reality show that featured five gay men teaching a straight man that he too could be well-groomed and stylish –  Lauren came to Bravo and capitalized on this success. She took the “Queer Eye” formula and applied it to fashion design, food and hair, creating shows such as “Project Runway,” “Top Chef” and “Tabitha’s Salon Takeover.”

Lauren’s first foray into the reality genre was with VH1, as one of the executives behind the critical and commercial success known as Pop-Up Video. Lauren quickly became a powerful player at VH1 following up the Pop-Up Video success with shows like “The RuPaul Show” and “The VH1 Fashion Awards.”

Her Bravo beginnings were a little shaky featuring many shows that quickly came and went, including “Sports Kids Moms and Dads” and “Showdogs’ Moms and Dads.” Lauren worked hard and was able to turn this around, eventually changing Bravo’s name to Bravo Media and selling branded cookbooks and guides to style. She was also instrumental in adding the graphic to the bottom of the screen during shows like “Real Housewives” encouraging viewers to visit Bravotv.com to purchase the outfits the cast is wearing.

This Wednesday, Lauren Zalaznick will be appearing in conversation with Emmy Award-winning journalist Joyce Kulhawik as part of the New Center LIVE! series. If you are interested in learning more about the evolution of reality TV and the current direction of the media don’t miss this great evening. Tickets are still available at www.NewCenterBoston.org. Tickets are $45 for patron level, which include a post-event reception with Lauren Zalaznick and Joyce Kulhawik, $28 for regular level or our special rate of $18 for anyone Under 25.