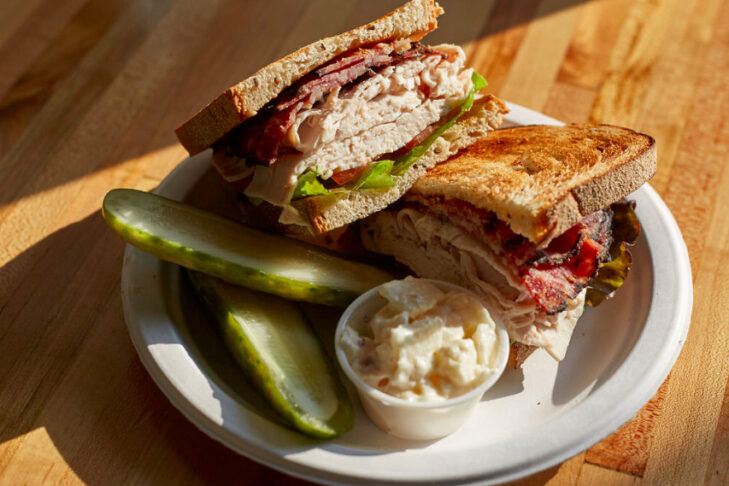 Many restaurants don’t last a year—let alone 45. But the venerable Michael’s Deli celebrates middle age during the week of April 4. Customers who come in and say “Happy anniversary” get a Dr. Brown’s soda for 77 cents (the restaurant opened in 1977). I chatted with owner Steven Peljovich about the role of delis in modern life, his favorite sandwich and whether any of his three kids will take over the business.

Michael’s Deli is a staple in the Jewish community. What role do you think it serves?

Talk about a loaded question! We’ll start with delis in general. It’s obviously been a staple in the general restaurant community for a long, long time—and there’s a deep history in terms of how they were created in New York, what the purpose was. It was food for the working class, cheap food with lots of flavor made by families to give to the workers, to give them the strength to do what they needed to do.

This is really a family business. My family is completely involved in this. All of my kids, my wife. Delis in general are mom-and-pop stores. Always have been. They’re not really built for chains; you don’t really see chains of delicatessens in terms of a deli. It always will be family memories, celebrations, the bad times. Deli is part of the Jewish culture. It’s part of landmarks in everyone’s lives, from the beginning, baby names and brises to bar mitzvahs, to graduations, to all those sorts of things. Deli is central in Jewish life. It’s not like, “We’re having a bris! Let’s do Mexican!” That doesn’t happen.

What’s the secret to your longevity?

I have really tried, and this is my parents’ upbringing, to be a part of this community. I don’t just pay my taxes; I’m not just a member of the Chamber of Commerce. But the Brookline teen center needs something? They’ll call me. The senior center needs something? They’ll call me. I work diligently with a lot of different local charities on a regular basis. I’ve got two sandwiches on the menu that support local charities. I’ll never be able to thank the community in general for the support they provided when we were in lockdown. When people were not going anywhere, and all I had was my home delivery, the amount of people who were like, “I don’t even want food. Can I just send you 50 bucks? Can I buy a gift certificate for the future?”

What charities do you work with? Let’s give them a shout-out.

I work with The Shawn Thornton Foundation. I’m one of the chairs of the local American Cancer Society Relay For Life. We’ve done stuff over the years with the Boston Bruins Foundation, with the Martin Richard Foundation, with Fisher House and The Greg Hill Foundation. If someone comes through with a cause, I do what I can to help them out.

How did you come to take over Michael’s? Obviously, you’re not Michael.

It’s one of those “this can’t be true” sort of stories: About 12 years ago, my mother-in-law was diagnosed with breast cancer. She’s fine, by the way. She was heavily involved in the Longwood medical area getting treatments. My father-in-law, being an old-school Jewish deli guy, found Michael’s. This would be his refuge when she was getting treatment. He’d come here, get some food.

He developed a relationship with [former owner Michael Sobelman] over the years, just getting to know him. And as I was getting ready to leave the corporate world and start looking for a place, he had talked to Michael on and off: “Hey, if you’re ever interested in selling, my son-in-law is looking to potentially open up his own place or buy an existing place.” And one of those days, he comes here and he’s like, “Wow, Michael, you look really tired today.” And Michael’s answer was, “You know what? I am ready to retire. Why don’t we call your son-in-law?” He totally misheard him! And, if he would’ve heard him right, he said, “Yeah, I’m a little tired today.”

Well, there’s always weird requests, and people sometimes whisper it to me. And what I always tell them is: “Look, you’re paying me money for the sandwich. I don’t really care what you eat as long as you give me the money!” That’s my patented answer. But we’ve had some odd ones, especially people who’ve never been in a deli before. They look at the toppings and they literally just think it’s like a buffet. And they’re like, “I’ll have lettuce, tomato, onion. I’ll have all five mustards, horseradish sauce, Russian dressing, mayonnaise, barbecue sauce.” That one happens probably once a month. And I’m like: “It’s not like you’re getting more meat. You’re just adding a bunch of weird stuff to your sandwich!”

What’s your favorite thing on the menu?

So, obviously, I’m here every day. I can’t eat corned beef and pastrami every day, or I would be 400 pounds. When I do indulge, one of the sandwiches that I created on the menu about four years ago—for the 20th anniversary of “The Big Lebowski“—is half a portion of turkey, half a portion of pastrami with sauerkraut, hot peppers and Russian dressing. And that was my personal indulgence when I really needed a full meal. That’s my sandwich. I don’t know anyone else who makes anything like that.

Do you think one of your kids will go into the deli business?

I hope not! It’s just a really, really hard life. You want them to find their own path. I’ve got pictures of our youngest, when I first bought the deli, standing on a milk crate, and my wife would help him punch the things on the register. Because he was 5 years old, he had no idea what the hell he was doing. And now he comes in here, and he’s 6 feet, 2 inches tall, and he can do everything that we need on the menu. Nothing makes me happier when they’re like, “Hey, you want some help this weekend? I don’t have anything going on.”

Hear more from Steven Peljovich on comfort food, his Cuban heritage and being “The Corned Beef King” on The Vibe of the Tribe podcast.