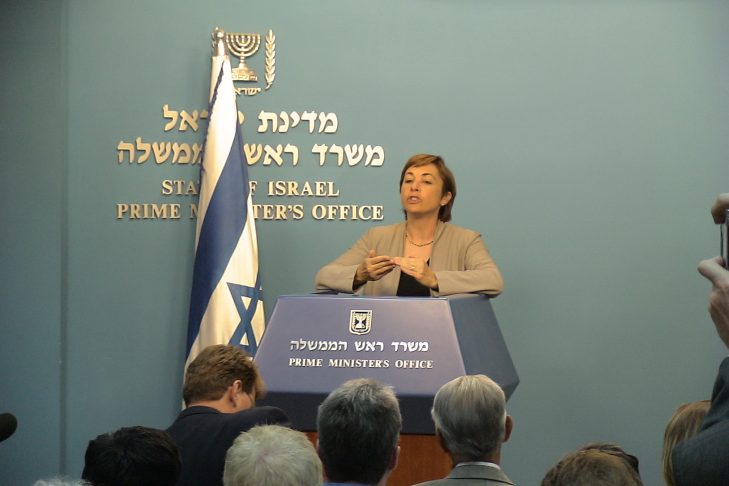 A good day for Miri Eisin is when Israel is not the focus of the current news cycle. A retired colonel from the Israel Defense Forces, she has served as Israeli Prime Minister Benjamin Netanyahu’s special international media advisor and spokeswoman. Over the past decade, she has lectured all over the world on Israeli diplomacy, geopolitics and security issues in the Middle East, and will be bringing her voice back to Boston later this month.

Eisin, lauded for her eloquence and deep knowledge of Israel and the Middle East, will be this year’s guest speaker at CJP’s Lawyers & Accountants Annual Reception on Thursday, Jan. 19. Her talk, “Israel in a Turbulent Region: A View From the Middle East in the Aftermath of the U.S. Elections,” will explore where Zionism is 120 years after its inception, “where we are in the Israel-Arab and the Israeli-Palestinian conflict…[as well as] changes in the region and how that all ties in.”

Eisin recently spoke with JewishBoston about the history of Zionism, her experiences living in Israel and the importance of language in resolving Israeli conflicts.

2017 is a year to commemorate important anniversaries for Israel and Zionism. Some of the anniversaries that Eisin will be considering are the 120th anniversary of the first Zionist Congress in Basel, Switzerland, in August, and the 50th anniversary of the Six-Day War in June. “The Six-Day War,” says Eisin, was a “high point for Zionism. Everybody was for this Jewish national state and understood the meaning of being in a Jewish homeland. I never thought the generation that came after me would be questioning its Zionism.”

Nor, at the time, did she anticipate that the world would doubt Zionism’s right to exist. Such political conditions, according to Eisin, necessitate that, “people need to think about what it means to be a Zionist. We have to define for ourselves why Israel is so important and what it means to all of us. Why is Israel so relevant 68 years into its existence?”

This question has underscored Eisin’s work as the prime minister’s spokeswoman and has driven many of her articles and lectures. On the world stage, she has fielded questions on a variety of issues from different points of view. “You had to have a combination of having knowledge of a broad variety of subjects and also be willing to respond on different subjects that include security, diplomacy and domestic issues,” she says. She notes that the challenge was not to give in to stereotypes and get angry. “Sometimes questions can be asked out of ignorance or…from a very negative framing,” she adds. “The first thing to do is to build a bridge.”

Eisin has been building bridges of understanding on behalf of Israel since she was an 18-year-old serving in military intelligence. Prior to that, without knowing a word of Hebrew, she and her parents made aliyah from Northern California in 1971. Part of her immersive experience into the culture and the language occurred in summer camp with local children. Soon after, she started the fourth grade and quickly acclimated.

Israel is also the place where she and her husband have brought up their three children. In a talk she gave in Boston two years ago, she described picking up her children at school the day a terrorist attack occurred close to home. The next morning, however, she and her children resumed their normal routine. Eisin explains: “I feel safer in the State of Israel than I feel anywhere else. I cannot imagine living somewhere else. [It] is also a place of freedom and independence of the best kind for kids. Service in the military emboldens and raises people who are doers and thinkers at a very young age. When somebody is drafted in Israel, he or she is not just going to war; the military is about a supportive social structure, not about war. That is why you’re willing to do crazy things in a time of war, like going toward the fire instead of backing away. I’m not sending my kids to war; I’m sending them to service.”

Eisin attributes much of the misunderstanding between Israel and the western world to a language problem. In her roles as a lecturer, teacher and writer, she is disappointed that there is no objective or balanced vocabulary with which to discuss Israel. Words matter to her, and she points out how they strongly implicate one’s political stance. “When I talk about Israel in the Middle East, simply by using the term ‘Israel,’ I’ve taken a stand,” she says. “If I say ‘the West Bank’ or ‘Judea and Samaria,’ you know my opinion. There are no neutral terms. The terminology you use colors you with a position so that the person talking with you will make implicit assumptions based on that terminology.”

She says that in Israel, “we speak the language of security, and the western world overwhelmingly [speaks] the language of humanitarianism. Even though we’re [both speaking] in English, it’s still another language—the framing of the terminology is different. When I talk security to someone who talks humanitarianism, I turn [him or her] off. And when they talk humanitarianism to me, I feel as if they’re in another world. Maybe in that gap we can find some common ground.”