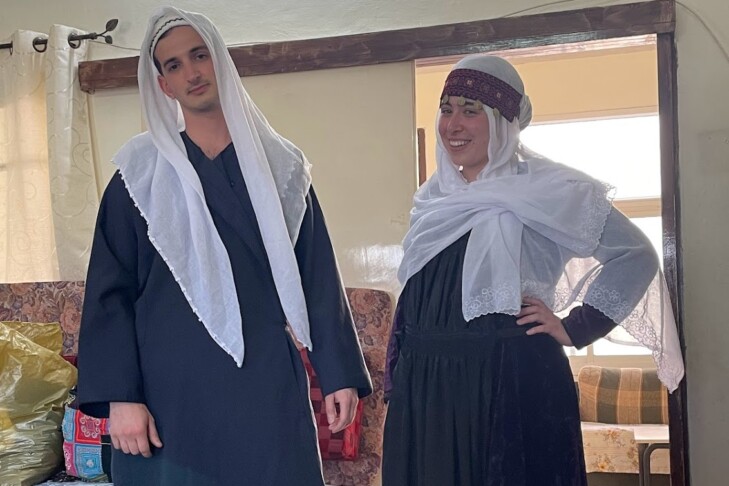 Today was the day that we toured a Druze village called Daliyat el Carmel, a short drive southeast of Haifa. We began the day as usual with breakfast at Beit Rutenberg, fueling up on coffee to prepare for the day. Once it was time to leave, we hopped onto the charter bus and found a few of our new Israeli friends waiting to join us on the trip. They were similarly excited as we were since they had previously not been to the village despite its proximity to Haifa.

After a 30ish-minute drive, we arrived in the village and got off the bus. Since we had a little time to kill prior to meeting our tour guide, we found a coffee shop nearby and got some more coffee and a few pieces of ice cream. Never too much coffee. We met our tour guide, who took us to an amazing art studio by a Druze man named Sam Halaby. The studio was a sight to behold, filled with bright colors and splatter paint across everyday objects like beds and tables. We wandered around taking photos and admiring the work. Afterward, Sam himself spoke to us and told us his story. The art studio was the house that he grew up in, and some of the objects like the bed and table were actually his family’s. He had always been interested in art, but it was very uncommon for Druze men to paint, and therefore there was a stigma surrounding his desire to become an artist. Eventually, however, he won over his family and is now a well-known artist in the country, having pieces even in the Israeli president’s house. A few of us who particularly liked his painting bought a few pictures. Mine is a beautiful tree with brightly colored foliage. 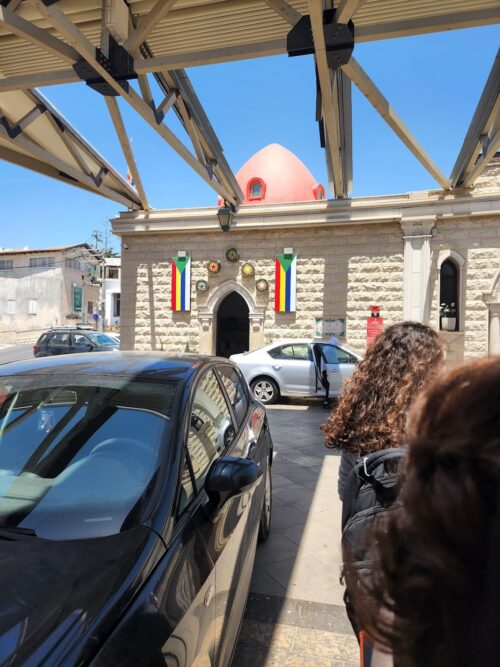 After Sam’s studio, we met with another tour guide who was the mother of a friend of one of the Israelis. She started by explaining the Druze culture to us and the rules about the religion, importantly that Druze can only marry other Druze, and provided us with some delicious tea and laffa and hummus during the session. Next, we were shown around the village and stopped at landmarks to learn about the Druze culture. For example, one stop was an explanation of the Druze flag outside a religious site. We learned that each of the five colors of the Druze flag (red, green, white, blue, and yellow) represents a prophet important to the Druze religion.

We also saw a public house where the community meets when someone dies, and the outside of a Druze site of worship. As the Druze are very secretive about their religion, we were unable to go inside. Our tour guide, who herself is not religious, told us that she does not even know all the rituals since only religious Druze learn the full rites of the religion. We also learned that Druze believe in reincarnation, albeit Druze souls become new Druze, and therefore deaths are not particularly sad moments since they believe that the soul will be born again into another body. There is no way for a non-Druze soul to be placed in a Druze soul after death and, in fact, conversion is not allowed at all in the Druze culture.

After our walking tour of the area, our guide led us into a house to show us what traditional Druze clothing looks like. Even better, she had one man and one woman from our delegation dress in the clothes, which provided an opportunity for great photos. Our guide even explained the basic marriage ceremony in the Druze culture and had our friends act it out. Fortunately for them, I do not think the ceremony was binding. We then left the house and headed over to a restaurant for lunch in the village, which consisted of some amazing grape leaves and rice, and also particularly well-spiced hummus.

After lunch, which was later in the day, we drove back to Beit Rutenberg and had some free time. I spent the time reading my book and doing a little bit of packing for the final day tomorrow. Since we had a free dinner, a few members of the MIT delegation and I took a bus to a pub that is frequented by Technion students. Some of our Israeli friends met us there and continued bonding with us over beers and burgers. By the end of the dinner, I was exhausted, and the MIT delegation returned to Beit Rutenberg for some well-deserved sleep.