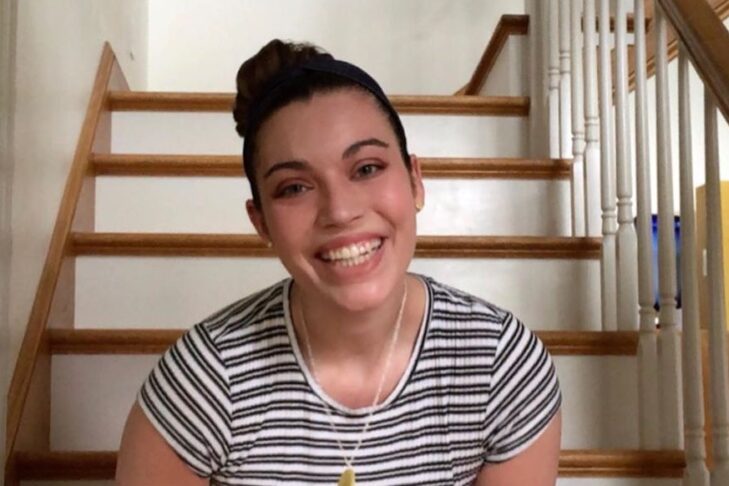 In addition to writing prolifically for many publications, Monica Sager is battling food insecurity and helping Boston students find their inner zen during the pandemic.

Sager’s introduction to Jewish life at Clark University was catalyzed by her involvement in the Hillel “Tikkun Olam” committee, which means “to heal the world.” In her sophomore year, she went on a campus Birthright Israel trip. Since then, she’s served as Hillel president and as an activist for Israel with CAMERA.

According to Sager, “Yoga Otzma” founder and instructor Evan Joblin was devoted to helping each student on their wellness journey for three weeks, giving everyone individual attention and coping strategies—including ecstatic dance sessions.

“Evan helped us by zooming in on words relevant to students’ lives right now, like ‘refocusing,’” said Sager. “He’s helping students find their inner smile and recognize more things in their lives. It’s also about being less stressed, especially as the pandemic goes on.”

Although yoga is an inward-focused practice, the point is to be aware of one’s interactions with the external—including the relationships and circumstances that affect students’ everyday lives, said Sager.

“We are making sure everything is OK with ourselves before putting it out to the world,” she said.

Although Clark students make up the class’s core, there are also students from Emerson College and Boston University. Soon, Sager will begin a 40-day immersive course with Joblin and a new group of students looking for wellness strategies.

For years, Sager has used her writing and activism skills to help people cope with food insecurity. She’s had a letter to the editor published in The Boston Globe on the topic and is the campus lead for Challah for Hunger, through which students sell challah to raise funds for Rachel’s Table in Worcester.

During the past year, Sager has worked with other students on recommendations to help students who cannot afford the school’s expensive meal plans. Although the problem is often hidden, thousands of Massachusetts students cannot afford dining plans.

“The big overarching element of Judaism I care about is tikkun olam, repairing the world,” said Sager, who plays bass guitar.

Sager aspires to be an investigative journalist, and her work has already won awards from Clark and American University. As the co-president of Her Campus, she is inspiring female journalists to contribute their voices to campus publications.

This year, Sager started to contribute her voice to JewishBoston.com, shining a light on CJP’s Onward Israel interns who are working in the struggle against COVID-19. Earlier in the summer, she co-founded Zoom University Hillel, a major platform for Jewish student engagement.

“I grew up in small town outside Philadelphia, where I was usually the only Jew in class,” said Sager. “Having this community now through Clark Hillel has been very special for me.”

According to Joblin, his student is committed to “repairing the world from the inside out,” he said. “Monica always brings a spirit of enthusiasm and open-heartedness to her practice on and off the mat as she engages with the practice of self-inquiry.”