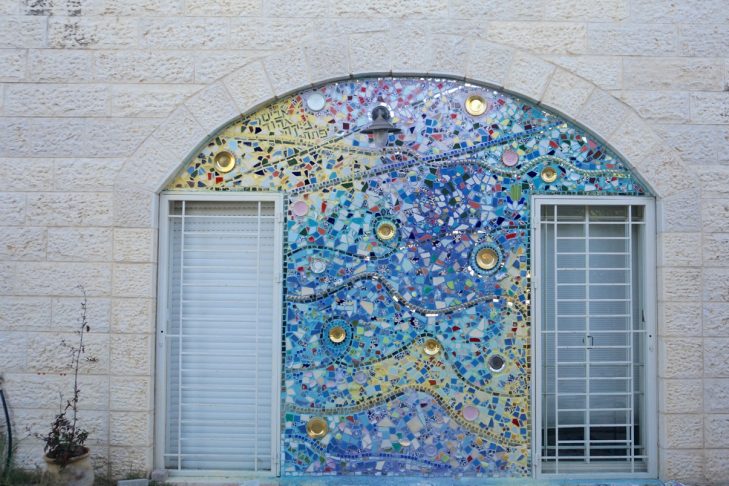 Mia Schon arrived at our interview with a fancy new drill. It’s an important purchase for the 29-year-old mosaic artist and Newton native who is visiting Boston from Tel Aviv, where she has lived for almost three years. Israel was a natural destination for Schon, who went to Solomon Schechter Day School in Newton, graduated from Newton North High School and then went on to attend the University of Michigan, where she earned a bachelor’s degree in fine arts. “Since I attended Schechter I had an interest in Israel, and as time went on I became very interested in it artistically,” she said.

Schon has found her new home to be amenable to her artistic pursuits—pursuits she comes by naturally. She is the granddaughter of public artist and sculptor Nancy Schön of “Make Way for Ducklings” fame. Her mother, Jill Kerner Schon, also an artist, owns The Paint Bar, a local concept art studio that provides step-by-step instruction for painting a personal work of art. Before she moved to Israel, Schon taught at The Paint Bar while also teaching art in pediatric hospitals under the auspices of The Hole in the Wall Gang Camp, a summer camp that serves seriously ill children.

Schon’s interest in mosaic art originated with a set of plates she inherited from her great-grandmother. In keeping with family tradition, her great-grandmother, who lived to be 104, was also an artist. Covered in lead paint, the plates were not ideal to dine on. After Schon went to a mosaic workshop in Philadelphia, a light bulb went off; she realized she could preserve the plates as art. She proceeded to break down the dishes into shards to create a mosaic, the end result of which was a tabletop that incorporated her great-grandmother’s dinnerware.

Shortly after, Schon bought a round-trip ticket to Israel, planning to stay for only three months. Almost immediately she connected with Tel Aviv’s vibrant art scene. “I was looking for things to do,” said Schon, “and I was hired to mosaic a wall at a Tel Aviv art studio. It was my first mosaic project in Israel.” The experience was so satisfying that Schon rented space in the studio to teach mosaic workshops. “I decided to stay in Israel because I felt there were a lot of opportunities to be creative,” she said. “Because it’s such a new state, people are very open to art.”

Schon experienced that openness when she literally went outdoors with her mosaic art. Her first public project was to beautify a wall with graffiti adjacent to her apartment building. “There is a great graffiti movement in Tel Aviv with artists making wonderful work,” she said. “But there is also a lot of spray-painting just to vandalize. That vandalizing is what caught my attention and jumpstarted my work in Tel Aviv.”

The short wall, which hid away garbage pails, was aerosoled with the word “nose.” “I walked by that wall for two years and it was bothering me,” Schon said. “I had materials from teaching mosaic workshops, and I found mirrors on the street. There is a lot of renovation in Tel Aviv, and I had also been collecting mugs, tiles and mirrors that people left behind. One Friday afternoon I started outlining this wall with mirror fragments. I didn’t ask anyone. I took the advice of an Israeli friend who said, ‘In Israel we just do things until people tell us not to.’” 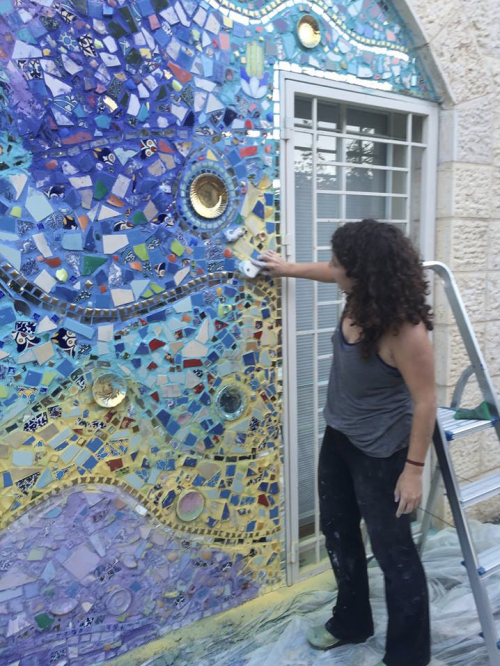 No one, however, stopped Schon. In fact, her neighbors cheered her on. “It became a kind of community project,” she said. “If I was breaking things down, people walking by would stop and help me smash them. Everybody got really excited about the project, and as a new immigrant this was a way for me to contribute to my city.”

Luck also played a role. Across the street from where Schon was mosaicing was the headquarters of Marmelada Market, Israel’s online art market. People in the office grew curious about Schon’s project. “A woman from Marmelada wrote a piece about me and the ongoing mosaic,” she said. “She blasted the article out to 16,000 people. Israel is so small that there was a huge response almost immediately. People wanted to take workshops with me. Others were interested in private commissions. Even the city of Tel Aviv called to explore options. Everyone embraced what I was doing.”

Now that the wall of her apartment building is finished, Schon has a new project planned at the North Central Synagogue in Tel Aviv, a congregation with a large English-speaking membership. When Schon saw that the synagogue’s archway was covered in graffiti, she sprang into action. At the end of December, she will paint the archway white and mosaic it with white and mirrored tiles that spell out the words of the Shema.

“I like that mosaics use all sorts of materials,” said Schon. “And [mosaics] are very durable. You can’t really paint over them. They are also symbolic of an Israel where many different people come together to create a new, lasting image.”