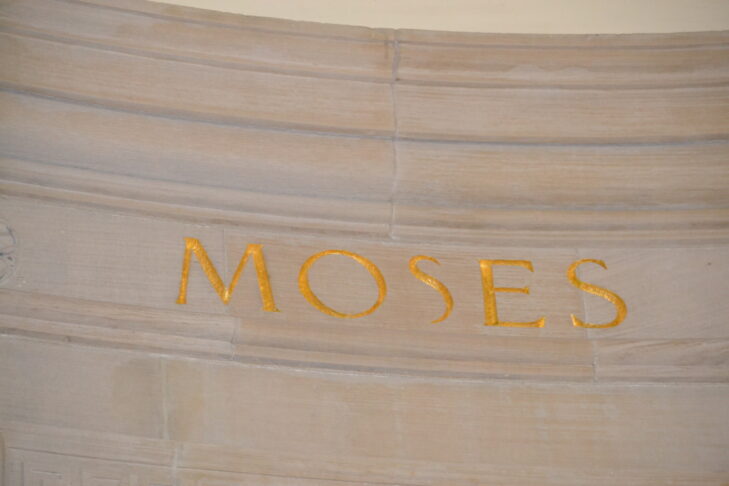 Moses’s name inside the Boston Public Library. High above the main reading room, his name is carved in stone and highlighted in gold. (Photo: Ken Bresler)

Holy Moses! With all the tributes to Moshe Rabbenu (Moses our Teacher) in the Hub, he’s an honorary Bostonian. To celebrate Shavuot, when God gave us the Torah through Moses, let’s visit Boston’s depictions and prominent mentions of him.

One head-to-toe portrayal of Moses is in the John Adams Courthouse near Government Center. The courthouse’s Great Hall has 16 statues personifying virtues and concepts involving or relevant to law. Each is identified with a small bronze plaque. One of the statues is “Legislation,” but it might as well be labeled “Moses.” “Legislation” is bearded and wears a tallit over his head and shoulders. The tallit is heavily fringed and has Roman numerals I through X on it. With one hand, Moses holds an unrolled scroll, even though the Torah describes the original Ten Commandments as written on stone tablets. He touches the scroll with his other hand.

Moses in the John Adams Courthouse. He wears a tallit with Roman numerals I through X and holds a scroll, rather than tablets. (Photo: Ken Bresler)

The John Adams Courthouse opened sometime in the end of 1893. (It had a different name then.) Mora sculpted the statues in granite or limestone. Mora’s papers, which could have revealed his thinking, are not extant, but this is clearly Moses. Moses is often depicted on and in courthouses because he was a lawgiver.

Another depiction of Moses in stone is right next door, on another courthouse. Above the entrance to the Suffolk County Courthouse are three bas-relief figures from the waist up. (They kind of melt away below their waists.) That’s “Lady Justice” in the middle with two swords and a set of scales; on the left, a figure probably representing government authority; and Moses on the right, bearded and with his left hand awkwardly touching, not really holding, two tablets with Roman numerals I through X.

The three figures are bookended by American eagles facing away from them. Moses’s tablets of the law rest on one eagle’s wings. It’s a striking tableau, Jewish and American symbols together, reminiscent of when Shavuot and Memorial Day coincide. 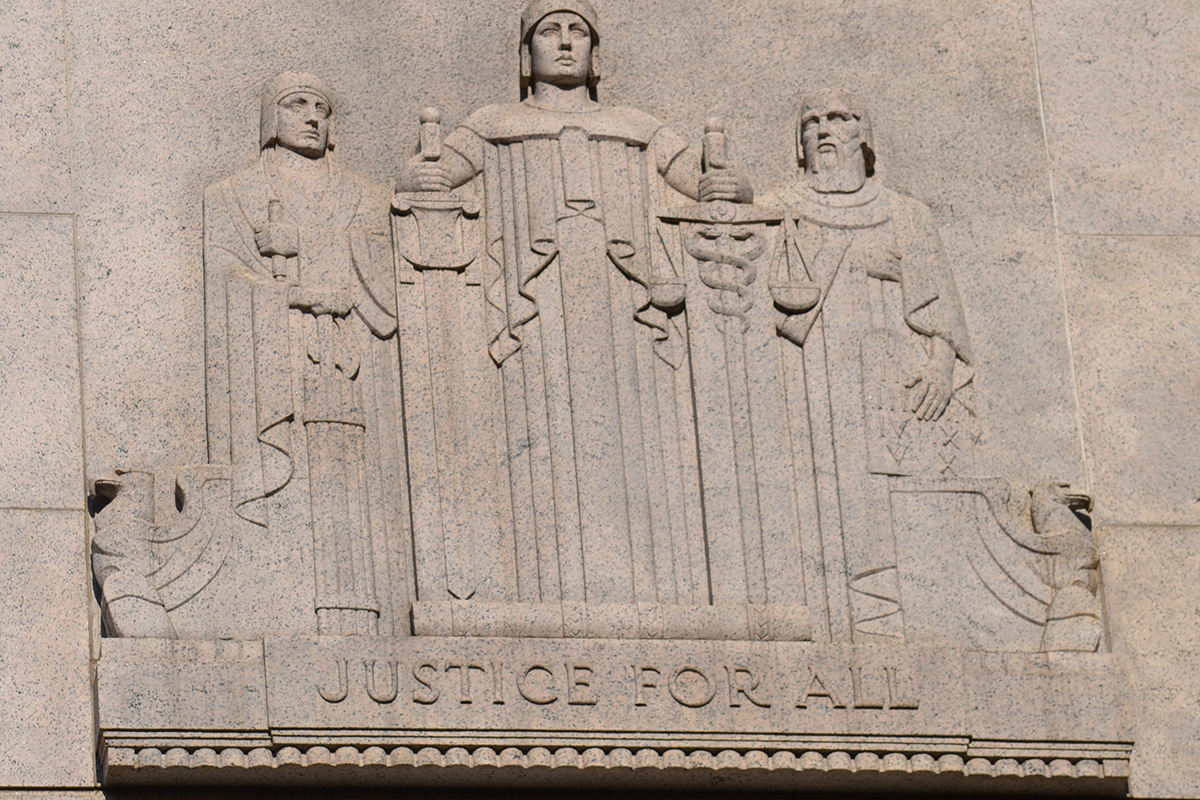 Moses on the Suffolk County Courthouse. Rendered in art deco, Moses rests the tablets of the law on an American eagle. (Photo: Ken Bresler)

The Suffolk County Courthouse opened in 1937 during the art deco era. John Paramino was the sculptor who rendered Moses in granite, and in art deco.

Across town, in Copley Square, Moses’s name is carved into the façade of the Boston Public Library. The original building displays the names of luminaries in religion and other fields. Among the 546 carved names (542 names, with four names accidentally duplicated) is Moses. Moses’s name is under a window with 22 other names, including Confucius, Mohammed, Socrates, Plato and another Jew, Josephus. 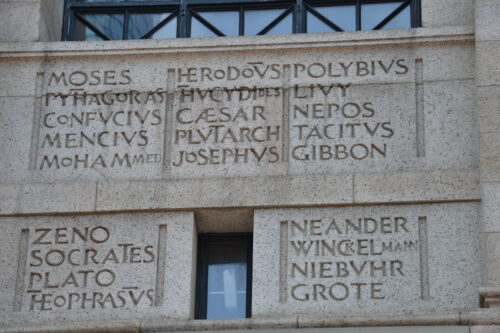 The names were possibly carved in 1892, but they were definitely on the façade before the library opened in 1895. It is no longer known who selected the notables to commemorate and what criteria they used. Those involved in the selection process may have included James Russell Lowell, a poet and Harvard professor; Francis J. Child, a Harvard professor whose specialties included English poetry; and William R. Richards and Phineas Pierce, who were library trustees.

Moses’s name also appears inside the Boston Public Library. At the top of Bates Hall, the main reading room, runs a stone band, a frieze, with the name of Moses and 33 other luminaries carved into it and highlighted in gold. As with the names on the façade, it is unknown who selected them. (Among the names in the frieze is “Buonarroti” for Michelangelo di Lodovico Buonarroti Simoni, whom Americans generally know as Michelangelo.) 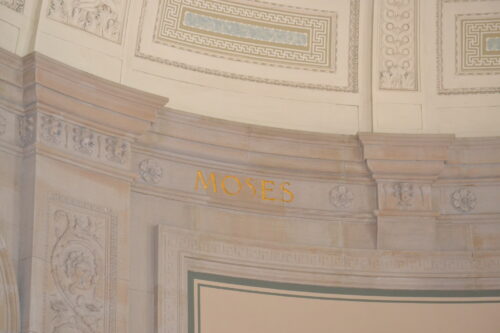 Moses’s name inside the Boston Public Library. High above the main reading room, his name is carved in stone and highlighted in gold. (Photo: Ken Bresler)

There’s more! One floor above Bates Hall is an extensive set of murals, which includes Moses painted by an American master, John Singer Sargent. The murals, “Triumph of Religion,” are in the Special Collections Hall. The murals have been controversial and objectionable almost since they were installed between 1895 and 1919. For one thing, the title might as well be “Triumph of Christianity Over Judaism.” But let’s put that aside for now.

The center figure in the “Frieze of Prophets” is our main prophet. Moses is highly stylized, much less realistic than the other Hebrew prophets who flank him. For one thing, Sargent painted Moses only from roughly the waist down. Those multiple wings starting around his head, more than just a pair of them, vaguely Egyptian, are supposed to be the winged divine presence. Each of Moses’s stylized hands rests on a tablet of the law, tipped slightly outward. Each of the Ten Commandments is abbreviated with two words in Hebrew. No Roman numerals here. The tablets are not rounded on top, as are most portrayals. (How the tablets of the law came to be portrayed as rounded is a different discussion.) He looks stern, even fierce. 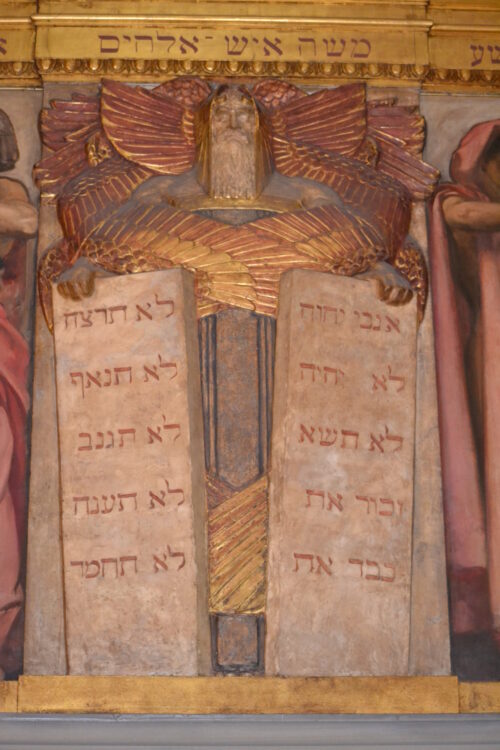 Moses, rendered in oil paint and gilt, is in bas relief, unlike the other prophets. To create relief elements in the murals, Sargent used plaster, wood, metal, glass, papier-mâché and commercial wall coverings. It is unrecorded which medium or media Sargent used to create Moses. Above him are the words in Hebrew: “Moshe Man of God.” Moses was installed with the other prophets in 1895, the year the library opened.

In “Triumph of Religion,” Sargent wasn’t kind to Judaism or Moses. If you stand with Moses to your left, the semi-circular painting in the center (placed in what is called a lunette) portrays God teaching Torah to the Children of Israel. In this painting, “Israel and the Law,” Sargent consciously decided to cut out Moses. God teaches us directly, as Sally Promey discusses in her book about the murals.

Elsewhere in Copley Square, on Copley Square’s other masterpiece, a second head-to-toe depiction of Moses appears. Moses is on Trinity Church’s highly decorated portico, on what those responsible for the architectural sculpture probably considered the Old Testament wing.

Moses has thick curls on his forehead and sweeping back from it. His beard is as thick as Rastafarian braids. He holds neither the tables of the law nor a parchment. 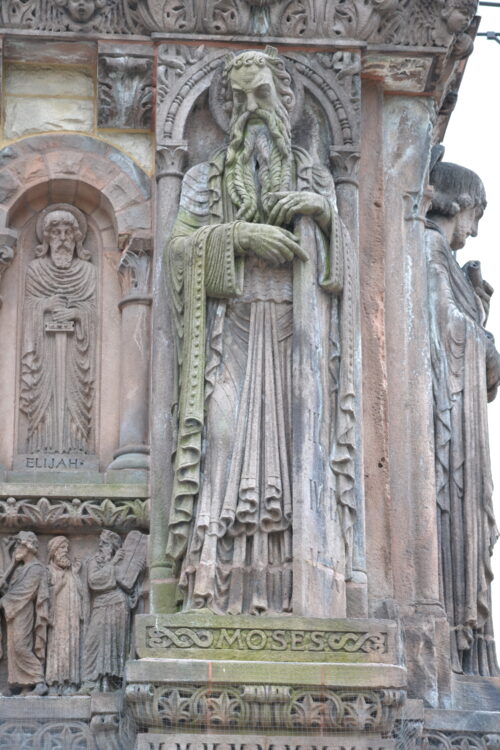 Two Moseses, side by side, on Trinity Church. The larger Moses is on the right. Mini-Moses holds the tablets of the law at the bottom. (Photo: Ken Bresler)

Moses is a part of a tableau with Abraham (who’s the same size), five smaller figures (three Jewish prophets and two Jewish kings) and a frieze with a procession of people and animals. The procession begins with Abraham’s journey, continues through the golden calf and culminates with Moses again, a mini-Moses. This second Moses holds the tablets of the law, rounded. He points to one tablet and his mouth is open, as if he is expounding on the law. He faces another man whose hands are raised, as if taken aback.

The sculptors who worked on Trinity Church were Domingo Mora—who sculpted Moses/”Legislation” in the John Adams Courthouse—and Hugh Cairns. John Evans & Co. executed the designs. Whether Mora or Cairns designed Moses on Trinity Church is not recorded. Although the church building was largely completed in 1877, the portico with the carvings was added later. It was largely completed in 1897.

I know of one more portrayal of Moses. It appears, incongruously, on the Esplanade. More specifically, it appears on a memorial to David Ignatius Walsh, who was a Massachusetts governor and U.S. senator in the early 20th century. Walsh stands in bronze on a stone pedestal in front of a gently curving wall. On the rear of the wall are three smaller bas-relief bronze sculptures, including Moses holding two curved tablets with Roman numerals I through X. His long beard is wavy. His curly hair is parted on his right. He gazes dreamily. A cloud peeks out behind him. 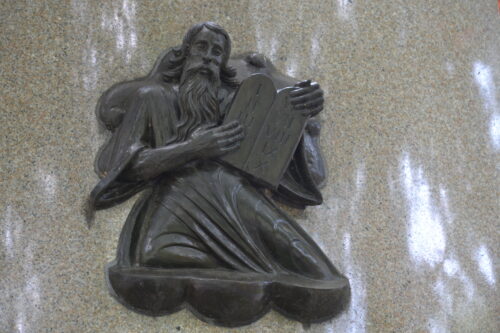 Moses, incongruously, on the Esplanade. Moses, with wavy beard, parted hair and dreamy gaze on a memorial to a Roman Catholic politician. (Photo: Ken Bresler)

Moses the lawgiver might be on a monument to Walsh because Walsh was a lawyer. Perhaps Moses and the Hebrew Bible were important to Walsh as a Roman Catholic. Joseph A. Coletti created the tablets of the law in the 1950s.

The Torah teaches us that Moses was the most humble man on earth (B’midbar/Numbers 12:3). What would he have made of all the tributes?

Directions to these sites:

Please note: The John Adams Courthouse and Boston Public Library are not open as of this writing. Directions are for when pandemic restrictions are lifted.

The John Adams Courthouse is located at One Pemberton Square. Pemberton Square is behind Center Plaza, the long, curving building where Tremont and Cambridge Streets meet in downtown Boston. Pemberton Square actually has two courthouses next to each other. The John Adams Courthouse is the older and shorter one. If you enter the courthouse from Pemberton Square, go up the stairs to the Great Hall. You can’t miss it. Moses is the first statue on the left. If you enter the courthouse from Somerset Street (the back entrance), go through security, turn left and go down the stairs to the Great Hall. Moses is the last statue on the right. The closest T station is Government Center.

To get to the Special Collections Hall and the mural with Moses, leave Bates Hall through the same central doorway that you entered. Turn right and then right again. Go up the stairs. The set of murals “Triumph of Religion” fills the hall at the top of the stairs. When you get to the top of the stairs, turn 180 degrees. Moses is straight ahead. The closest T stations to the Boston Public Library are Copley Square on the Green Line and Back Bay on the Orange Line.

To get to the David Ignatius Walsh statue, go to the Esplanade. The statue is near the Hatch Shell, between it and the Arthur Fiedler Footbridge. The statue is at the base of the bridge. The bridge, meanwhile, is near the intersection of Beacon and Arlington Streets. If you use the footbridge to get to the Esplanade, as you descend the bridge, you’ll see the back wall of the statue, and Moses. The closest T station is Arlington. Use the exit marked “Public Garden” (not marked “Arlington Street,” even though you’ll be walking on that street).

A previous version of this article appeared in The Jewish Advocate.