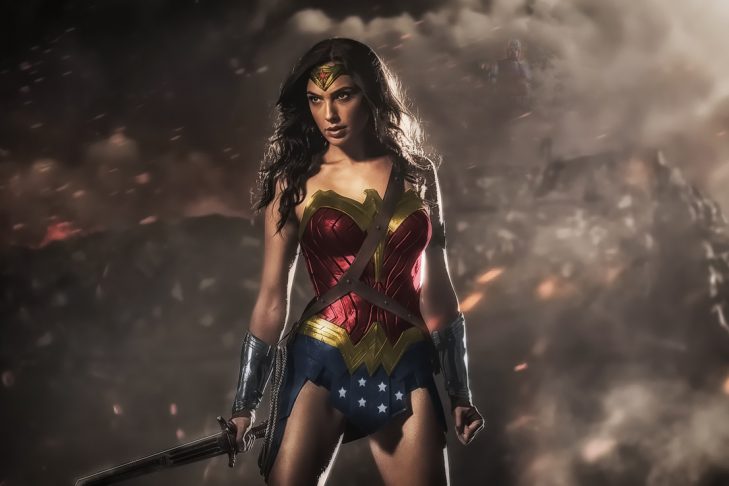 Early on in Wonder Woman, Queen Hippolyta (Connie Nielsen, of Gladiator and The Devil’s Advocate) warns her daughter, Diana (Gal Gadot, who needs no introduction), “Be careful in the world of men, Diana, they do not deserve you.”

How true. We don’t. But then again, when does the world of men NOT need to be saved from its nihilistic tendencies (present day certainly included)? Thankfully, in those and these desperate times, we’ve got Wonder Wo—.

Nah. I’d actually prefer if you don’t call her Wonder Woman, or even Diana Princess. Names can be limiting, especially for our heroine, who tells a skeptical Steven Trevor (Chris Pine, Star Trek), “My mother sculpted me from clay and I was brought to life by Zeus.” In that case, yes, Diana is OK by me. All that’s debatable is whether she was actually sculpted from clay or cut from iron, as the wispy Gal Gadot from The Fast And The Furious franchise is now long gone, replaced by a much, well, stronger version. Can I say it’s even more beautiful? I just did.

The opening scenes, which take place on the island of Themyscira, are vivid and spectacular; the island of the Amazons shines in every way. Who needs men, really, when you’ve got Antiope (Robin Wright, who you remember from The Princess Bride and Moneyball), training legions of warriors, including Diana, to defend the island from Ares, brother of Zeus and killer of the other gods. Add to that mix Queen Hippolyta and you’ve got something else that should be named—women rule, especially middle-aged ones, who get more beautiful, wise, and powerful in a timeless fashion. It’s refreshing, and must be pointed out, that with the Amazons, strong is indeed the new sexy.

When Trevor literally crashes his airplane into their Mediterranean paradise after stealing war secrets from the Germans, mythology meets reality, and Diana meets…a man. As that relationship unfolds, the layers are peeled away and of course we find out that Diana speaks dozens of languages, is an incredible fighter, and is well-versed in classical texts and education, even those about “matters of the flesh.” Enjoy that bit, and also a devilish chuckle when she encounters both a wristwatch and Trevor’s naked body and comments on the size of one of those things. Or both.

The Germans arrive, looking for Trevor, and unfortunately the encounter of Amazons vs. Bad Guys doesn’t go supremely well (think of Ewoks vs. Storm Troopers), but when that uncomfortable scene is over, Diana’s save-the-world instinct is burning. Her decision to leave Themyscira on a heroine’s quest to end the Great War is a stretch, but Gadot plays that card with a naïveté and conviction that is at the same time admirable, believable, and hysterical.

Diana encounters the real world and laughable gender stereotypes of wartime London and Western Europe on a singular crusade to kill the German archenemy, General Ludendorff (Danny Huston, X-Men Origins: Wolverine), whom we assume to be Ares—because who else would be able to orchestrate such evil—and end the war.

Trevor assembles a ragtag, multicultural band of brothers to accompany him and Diana to the front in Belgium and take out Ludendorff and his new poison gas weapon that threatens to end the chances for an imminent armistice agreement. Enter Sameer (Said Tamghmaoui, Three Kings), as the Middle Eastern fast-talking fixer, Charlie (Ewen Bremmer, Black Hawk Down), as the Scottish sniper-or-not who suffers from PTSD (or just TSD), and The Chief (Eugene Brave Rock), a native American who is just hanging around the Western Front to make money. (Tin Man, Scarecrow, Lion, anyone?)

Diana finally realizes her powers on the front as she charges across No-Man’s-Land (channeling Eowyn’s “I am no man!” line from Return of the King), single-handedly ending the year-long standoff, saving an enslaved village, and doing the superhuman thing. Her takedown of both a German sniper and church steeple in one fell swoop could be read as some kind of swipe at religion and war…but I’ll leave that alone.

Shortly after there’s a scene when Diana is leading the guys toward a confrontation with Ludendorff, and the men ask themselves if she is for real. Is she really the daughter of Zeus? Are they really a part of some ancient conflict between the gods? You can see them starting to believe it, sort of. But if it walks like a child of Zeus and fights like one, perhaps this really is a Golem sent to save the world of men from destroying itself.

At the end of the day, it really doesn’t matter whether they believe her or not, or follow her on her quest; as she tells Trevor, “What I do is not up to you.” Indeed, her moral clarity is resolute and unbreakable, and we all know she’s right. She will face down Ares and try to end the war, and really she doesn’t need their help. Pay attention through the CGI and stay with the changes and you will see if it goes down as planned.

Not everything sparkles in the film, but not to worry. There’s mercifully only the smallest reminder of the dumpster fire that was Batman vs. Superman, and the requisite quasi-love story embedded into the narrative is beyond unnecessary. But let’s not split hairs—this is the best superhero movie since The Dark Knight and it’s certainly a lot less heavy.

Finally, the chutzpah of casting the Israeli Gadot should be praised and should be owned—she isn’t American, she speaks with a foreign accent, she’s not white (sorry, no, not sorry at all, to those who assert that Ashekenazi Israelis are white), and she was fabulous. Compared to other male superheroes that were bad-ass but not very deep—I’m looking at you, Bale, Affleck, Cavill, and Hemsworth—Gadot wins that race going away.

With the preview for Justice League looking terrible, here’s hoping we’ll see a second installment of this reboot, and soon. I’m sure our world will need saving, again, by the time it comes out. I daresay we need it right now.