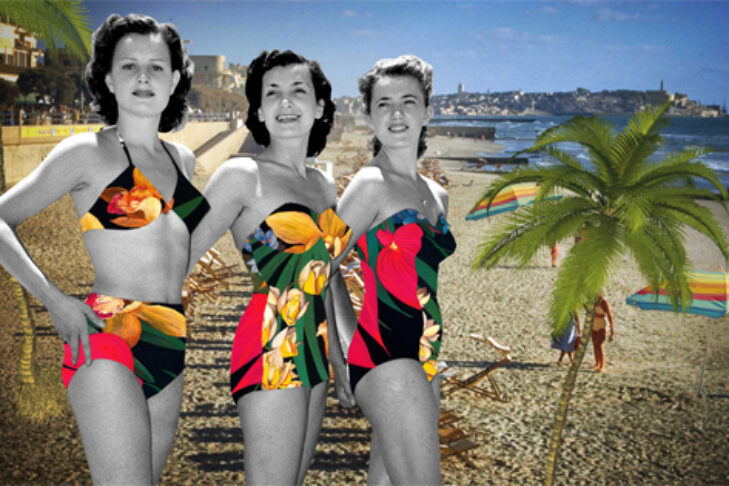 Showing as a double feature at the Boston Jewish Film Festival, the documentaries “Mrs. G” and “Kosher Beach” reflect on how women cover up at the beach and what their swimwear symbolizes to them and the world.

Lea Gottlieb, the creative genius and pioneering force who built the Gottex swimwear empire in Tel Aviv, was known as the formidable “Mrs. G.” The moniker also provides the title of a new Israeli documentary about her life and work—a film that has the distinction of being the first to chronicle an aspect of the country’s fashion industry.

Gottlieb, a Hungarian Holocaust survivor, immigrated to Israel in 1949 with her husband, Armin, and two young daughters. She managed to elude the Nazis by hiding in plain sight while her husband was in a labor camp. Armin had manufactured raincoats in Hungary and hoped to continue the business in Israel. Lea designed the raincoats, but she soon realized there was no demand for them in a country where it’s sunny for most of the year.

The Gottliebs first settled in a small apartment in Jaffa and could see the beach from their living room window. Gottlieb noticed the women wore drab and old-fashioned bathing suits. The women of Israel deserved better, and Gottlieb was determined to give it to them in luxurious fabrics and bursts of color.

Gottex—the company name is a portmanteau of the name “Gottlieb” and the word “textile”—was founded in a rundown section of Tel Aviv. From its earliest years, the brand dazzled the fashion world as Gottlieb introduced her couture swimwear in bold patterns, bright colors and original cuts. Gottlieb was also one of the first designers to incorporate Lycra into her fabrics, and it wasn’t unusual for a Gottex bathing suit to include precious gems and gold chains.

Part of Gottlieb’s genius was to absorb the world around her and integrate elements such as flowers and art in her designs. She found inspiration in diverse settings and events that included the mosaic murals of Josephine Baker in Harlem, and the peace brokered between Israel and Egypt in 1979. The Sinai ignited Gottlieb’s imagination, as did Jerusalem, which she presented as the City of Gold. The Jerusalem Collection, made of white, light fabric and adorned with gold and turquoise gemstones, debuted in Germany. Israel’s unofficial anthem, “Jerusalem of Gold,” was the show’s soundtrack. It was a moving moment for the usually stoic and exacting Gottlieb, who was honored with a standing ovation in Germany.

“Mrs. G” is also a window into Gottlieb’s personal failures. Her daughter Miriam, who is extensively interviewed in the documentary, describes her mother as a cold, uncaring woman. Not supportive of Miriam going out on her own as a fashion designer, Gottlieb insisted that both her daughters work in the family business. Miriam would only work for her mother with an ocean between them. In New York City, Miriam successfully introduced Gottex to luxury merchandisers such as Saks Fifth Avenue, Neiman Marcus and Bergdorf Goodman.

Her other daughter, Judith, stayed in Israel to work by her mother’s side. According to various people interviewed in the film, Gottlieb quashed her younger daughter’s creativity in service to the Gottex brand. Judith died at 59 of cancer. She was treated in New York City near her sister, and it’s still a flashpoint for Miriam that Gottlieb never visited Judith in America during her illness.

Gottlieb was also a secretive woman. Toward the end of the film, Miriam views a clip of her mother giving an interview for Yad Vashem. Until that moment, Miriam had no idea the recording existed. In the footage, Gottlieb relates how she and her girls ran from attic to attic in Budapest to survive deportation.

When Gottlieb sold the business in 1997, the most glamorous women in the world—including Princess Diana and Sophia Loren—had worn Gottex swimwear. But Gottlieb was not ready to retire, and in 2000, she unveiled a collection of swimwear under the label “Lea.” Gottlieb died in 2012 at the age of 94, having achieved artistic heights few designers reach. The Gottex brand still exists under new management, and Gottlieb’s vision remains alive. “Kosher Beach,” a documentary about a segregated stretch of beach in Tel Aviv where Haredi women can swim out of the public eye, is part of a double feature with “Mrs. G.” The two films are perfectly paired. Here’s a picture that presents women wearing the kind of swimming costumes that inspired Lea Gottlieb to design beautiful, designer swimwear.

The women who frequent the “kosher beach” are from the ultra-Orthodox B’nei B’rak neighborhood just north of Tel Aviv. It’s a half-hour drive and world away from their private beach on the Mediterranean. One woman describes B’nei B’rak as a suffocating place where she can see into her neighbor’s apartment. But at the beach, these women, who wear black tights, oversized turtlenecks and fitted turbans to maintain stringent standards of religious modesty, have a respite. They come faithfully on Sunday, Tuesday and Thursday, the days when the beach is designated by gender.

“Kosher Beach” is a rare portrayal of a secret sisterhood—one in which the women who are a part of it revel in the pleasure that they have a rare day off from the responsibilities of running busy homes and rearing large families. The women cavort under the watchful eye of lifeguards—the sole men on the women’s stretch of beach—who understand their job is mainly to blend into the seaside landscape.

The audience is offered an unprecedented glimpse of these women floating in the water. Their clothes bloom around them as if they have always been natural inhabitants of the sea. It’s a moment of pure joy, and we can’t help but be happy for them.