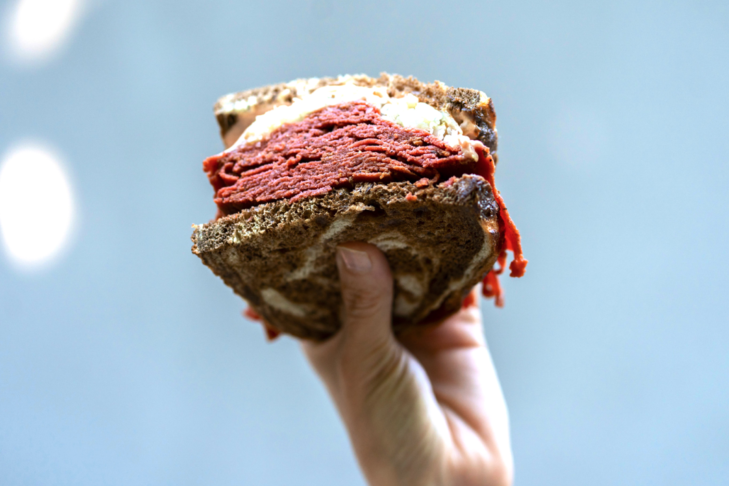 This past year has been an exciting one for Jenny Goldfarb. The home cook and food blogger launched Mrs. Goldfarb’s Unreal Deli, which features her one-of-a-kind vegan corned beef—a mix of beets, chickpeas and tomatoes combined with a “complex spice blend.”

Goldfarb, also known as “Mrs. G.,” is a transplanted New Yorker living in southern California. She started cooking and eating vegan almost a decade ago after learning about animal cruelty in the meat business.

As she recently told JewishBoston, her business skyrocketed after her appearance last November on ABC’s “Shark Tank.” She impressed businessman Mark Cuban, who invested $250,000 in Unreal Deli in exchange for a 20% stake in her profits. Even before exposure through “Shark Tank,” Unreal Deli was expanding its national market and was already on the menus of leading Los Angeles delis, as well as the studio lots of Netflix and FOX.

As for personally road-testing the product, I recently served it to friends and family, who gave it high marks for texture and taste. Goldfarb also said it was important to her that Unreal Deli be deemed kosher. To that end, the Chicago Rabbinical Council has certified Unreal Deli products as kosher.

In our interview, Goldfarb explains how she got into the deli business to begin with. 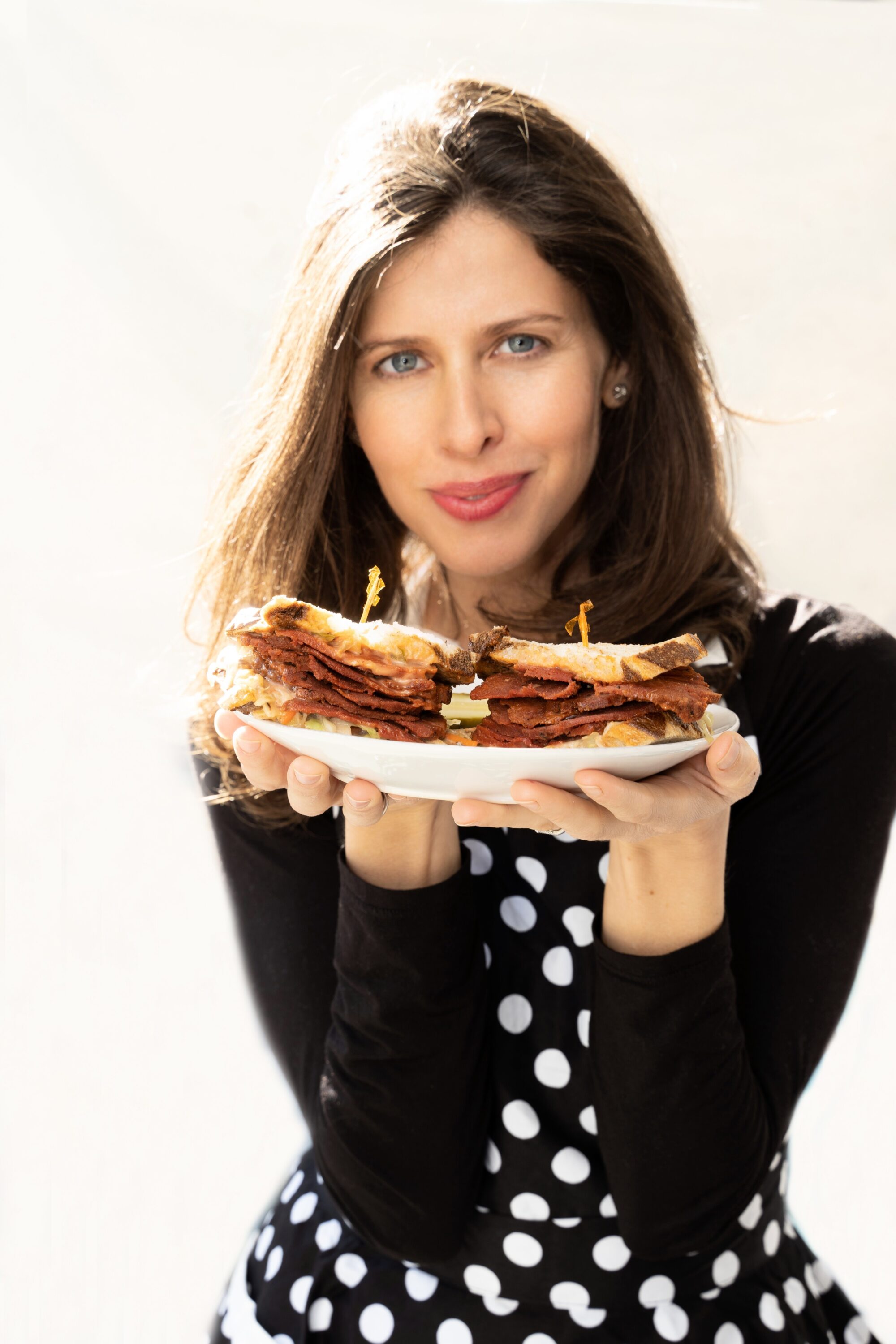 I like to say that my story goes back over 100 years. My great-grandpa emigrated from Romania as a teenager without his parents and without speaking the language. To me, that’s the most amazing part of the whole story. He didn’t have a tremendous skill set, so he washed dishes in Lower East Side delis. Living the classic American Jewish dream, he went from washing dishes to owning and operating several New York City delis and cafeterias.

Did you see yourself going into the deli business?

I had this deli lineage latent in my bloodstream. We ate a lot of corned beef and pastrami growing up, but I never thought I would be anywhere near the deli business. And I’m still not certain that I’m in the deli business! But I realized this kind of corned beef was very much missing from the plant-based world. I grew up eating meat—corned beef and pastrami, and meat and chicken and all the rest—and then I lived in Israel for a year after college.

How did living in Israel influence you?

I wanted to investigate the Torah and the Jewish people, and so I had a really enlightening year. During that time, I started eating kosher meat, which I thought was the more ethical choice. But as I wound up learning after moving to California in 2011, kosher farms and organic farms also had deplorable conditions. The only reason it goes on is because people either don’t watch [documentaries about animal farming], or it’s out of plain view. Paul McCartney has this famous line where he says, “If slaughterhouses had glass walls, everyone would be vegetarian.” But YouTube has glass walls, and more and more people are becoming vegetarian and vegan.

When I broke the news to my meat-and-potatoes husband that I didn’t want to eat meat anymore—and I didn’t want to cook it—he asked, “What are you going to make instead?” I got some vegetarian cookbooks, and then I learned the dairy scene was even worse in terms of cruelty than the meat one. I said to myself, “Gosh, I can’t participate in this either. What am I going to eat now?” Mind you, I had two toddlers and this meat-and-potatoes husband. All my kids wanted were mac and cheese and chicken nuggets. 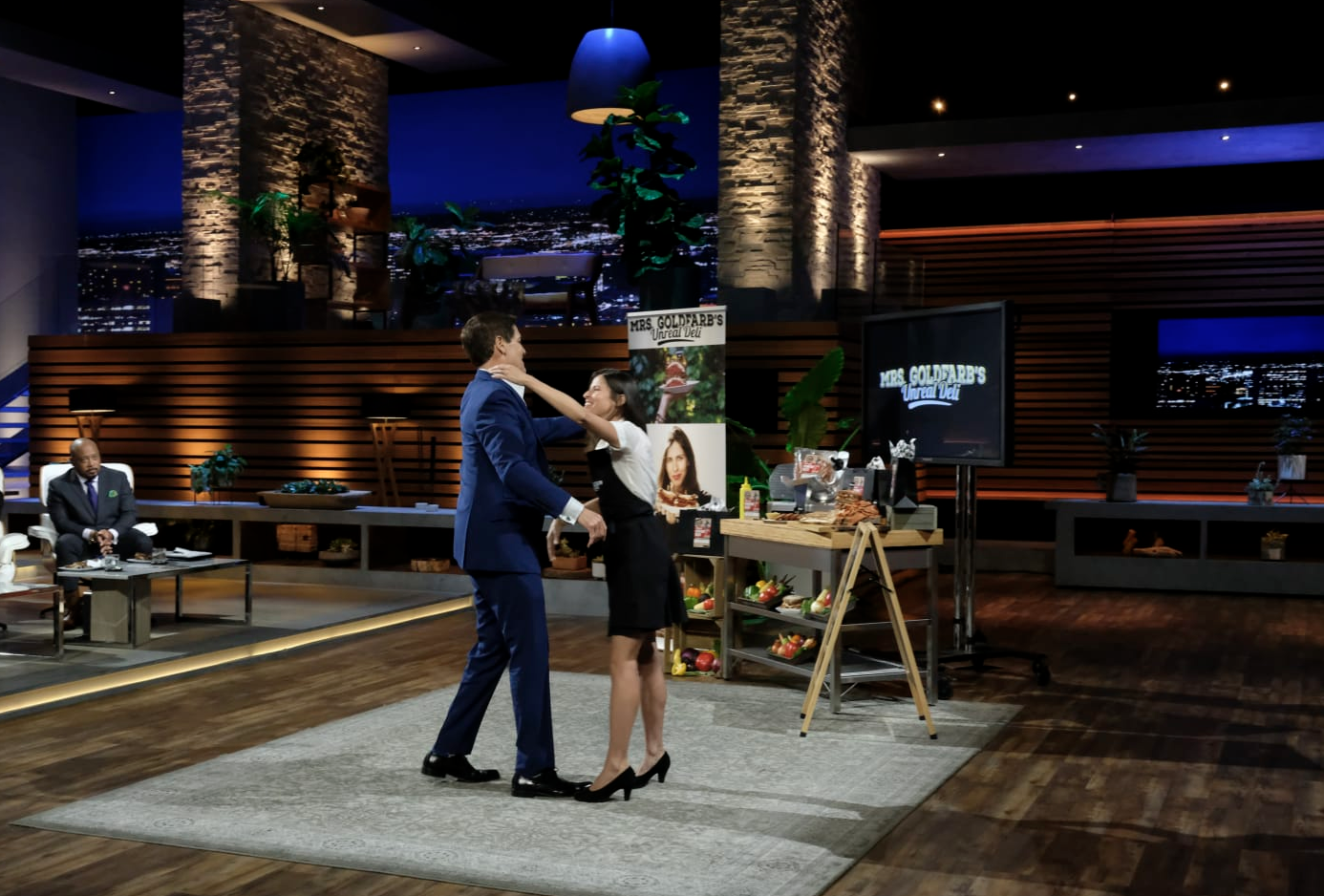 I bought a bunch of vegan cookbooks and, very slowly, begrudgingly and with many, many fails along the way, I learned how to cook from the produce and grains aisle. I had no background in any of this. I knew how to throw a piece of chicken in the oven and take it out 30 minutes later. I didn’t have any real experience cooking, and I certainly didn’t have any experience cooking vegetarian or vegan. But I learned on the job because I felt morally compelled, and my family was demanding it be delicious. With a number of those recipes, I created a video food blog showing moms and everyday busy working people how doable and delicious vegan could be, even from a self-taught cook.

How did this all evolve into creating vegan deli meat?

There came a point when I realized there was nothing representing my Jewish deli lineage—there was no good vegan corned beef or pastrami out there. But things can happen in the blink of an eye. I served my vegan corned beef at a Hanukkah party at our house last year. A bunch of friends were there, and so were my in-laws. My in-laws, who were skeptical, tasted this “meat” and were going back for seconds. They were saying, “I wouldn’t know the difference.” They were saying, “Make a business out of this!”

I rented a tiny commercial kitchen and started making vegan corned beef in small batches. I also cold-called the delis around town and convinced a number of deli owners to take it on. Many of them put us front and center on their permanent menu, and that was very big.

I also started reaching out to Whole Foods, universities and film studio lots; it took time to get in with each of them. Some of them required distribution. Whole Foods required months of just emailing, being kind, with polite persistence. There’s a line in the Talmud that says, “Babies bring marvel.” I was pregnant throughout almost this whole process. Two days after I gave birth, I got an email from Whole Foods: “We want to bring you on.” So, that brings us up to “Shark Tank.”

How did your appearance on “Shark Tank” change the trajectory of your business?

Get 20% off your order of “The Shark Favorite” here.