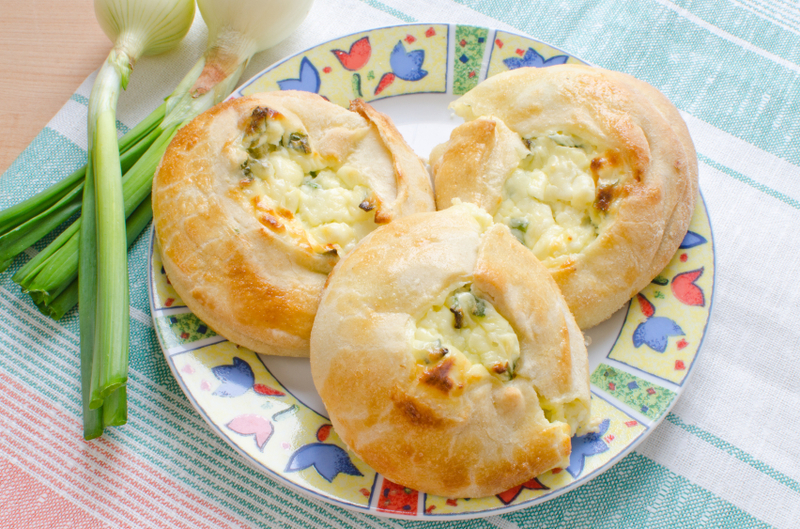 I love knishes—they’re probably at the top of my Jewish food list. I’ve never been a big fan of blinztes, and brisket doesn’t really excite me. But a good knish has me talking for weeks! Ever since I read “Knish: In Search of the Jewish Soul Food” by Laura Silver, aka the world expert on knishes, I haven’t been able to stop obsessing. From retelling the etymological stories from the book to hunting for the perfect knish, I’ve been on a delicious, dough-filled mission. My passion for these handheld delights and first-hand research has led me to create this list of the five best knishes around:

Michael’s Deli (Coolidge Corner, Boston)
I’m crazy about Michael’s Deli knishes! The “mishegas” knish (“craziness” in Yiddish) has as much going on as its name insinuates, and it’s a meat lover’s dream. The pastrami knish has really put the deli on the map, and I can’t think of anywhere else you’d find a grilled cheese, nacho or bread-pudding knish—all of which I can vouch for!

Inna’s Kitchen (Newton Centre, Boston)
These are the real deal, homemade with love by Inna herself. They’re filled with more traditional fillings, like perfectly seasoned beef, potatoes, mushrooms and spinach. There are no crazy flavors here, but this perfect little pocket makes a great lunch accompanied by a bowl of soup or a salad. Even their gluten-free variations are tasty, and that’s a real feat!

Zabar’s (New York City’s Upper West Side)
I’m the daughter of a New Yorker, so I grew up on these knishes. These bad boys are what you think of when you conjure up big, round knishes with perfectly thinned outer dough. They’re worth the trek to New York City or the cost of overnight shipping (they’ll deliver to your door!). I never leave the city without at least one of these knish variations: kasha (buckwheat), mushroom or sweet potato.

Yonah Schimmel Knish Bakery (New York City’s Lower East Side)
If you’re paying a visit to New York City, you also need to hit up this old-school spot—it’s about as original as you can get! Laura Silver’s book, “Knish: In Search of the Jewish Soul Food,” has several great stories about this bakery, which is in a great location and has had enough positive PR to sustain it for all these years.

The Crown Market (West Hartford, Connecticut)
My mom grew up on these knishes, and they’re still as good as I remember from my childhood. There’s lots of variety, but I’m still partial to their kasha knish.

That’s just a small taste of the wide world of knishes! Want to try some and meet Laura Silver, the knish queen? Join the New Center NOW Cooking Circle for “Knishes, Cocktails and Conversation” on Wednesday, Oct. 29, at Gordon’s Fine Wines & Liquors in Waltham. You’ll learn how to make your own in case you don’t feel like trekking all over in search of these delights, plus you’ll leave with an autographed copy of Laura’s book so that you, too, can become a knish expert!