As we approached the town on the Thailand/Burma border, where I would be spending the next four months, the bus stopped suddenly and the Thai police came on-board. “Passports please,“ they shouted in Thai and English.   My coworker whispered across the seat to me that the police came on the bus to check everyone’s ID, making sure that they are in Thailand legally. They quickly glanced at my American passport and curly hair and continued on their way. Welcome to the Thai/Burma border.

After a few more police checks, where a few people were removed from the bus, we finally arrived. Even though it is located in Thailand, the population of the town consists mostly of refugees from Burma, many whom have no legal status in Burma or Thailand. There are a few Thais living in the town, as well as perhaps hundreds of  foreigners who volunteer at the myriad of Burmese- focused organizations. It is less than three miles from the Burmese border,  a country with one of the worst human rights records in the world. The military government, which renamed the country Myanmar in 1989, continues its policies of ethnic cleansing as the rest of the world turns a blind eye. 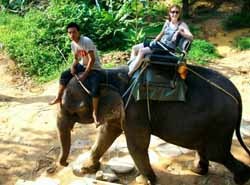 The Thai border town is tiny compared to Boston, but for the Burmese who settle there, it is a much better life than they could ever have across the border in Burma. Down the street from my apartment was the inconspicuous Mae Tao Clinic. Families from Burma walked for days or weeks through the jungle in order to receive free medical care at the clinic. Babies were born, adults were treated for chronic conditions and future doctors were trained- all for free. Across the street from my apartment was a “safe house” where Burmese political prisoners stay after they were released. Only Thai citizens can attend Thai schools, receive medical care and own land. Despite the lack of public services and freedoms, the ethnic minorities who move to Thailand to support their families and live in greater freedom than in their home country.

Day-to-day, I worked with individuals from the Karen ethnic minority group, which is the largest minority in Burma. For over 60 years, they have been fighting a civil war against the Burmese government to have the right to their own land.  Everyday at work, my Karen coworkers greeted me with open arms and piles of food. To them, I represented a wealth of professional knowledge and information about America. Most of them are not able to leave the border area, unless they decide to immigrate, since they did not have the proper ID.

During Passover, we talk about Jews being “strangers in a strange land.”  For the Burmese and for myself, living on the Thai/Burma border was like living in a strange land- a land full of contradictions, curry and hope for a better, more peaceful life.