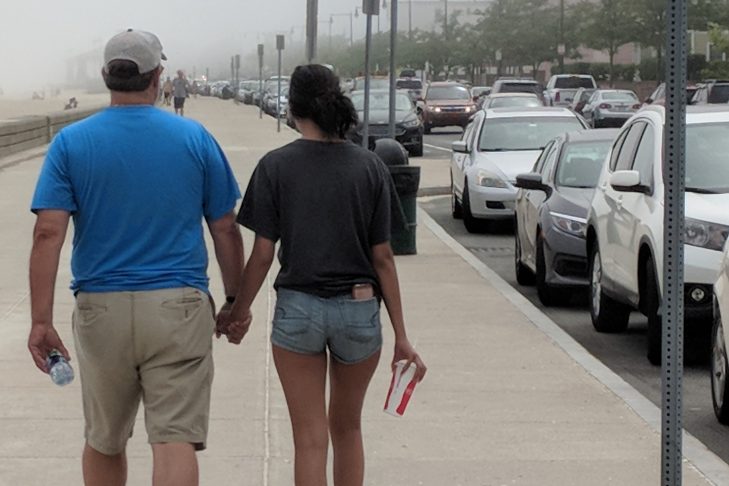 Despite the fact that we were mistaken for twins as children, my sister, Melanie, and I could not be more different. She is pursuing a degree in psychology in San Diego; I just finished my master’s in publishing on the opposite coast. She is bubbly, outgoing and personable. I am introverted and a little prickly. I’m a doormat, she’s a short fuse. We have opposite palates, opposite priorities, less “two sides of the same coin” and more “incompatible currency.” Water and oil, orange juice and toothpaste. As teenagers, we butted heads over social minutiae, gnawing at each other’s nerves in that erosive sibling way. Once I moved away to college, we grew closer and I enjoy her company, but those fundamental differences still collide against each other like tectonic plates whenever we meet for the holidays.

Obviously, these differences extend to religion. She doesn’t practice Judaism, decided to skip on a bat mitzvah after watching me struggle for eight months, and felt more comfortable blending in with our primarily Christian classmates. I, meanwhile, was exploring atheism, Buddhism, a cursory toe-dip into philosophy. As we got older, we argued over the existence of God, over my resentment toward majority religions, over our legitimacy as patrilineal Jews. I delved deeper into the religion, while Mel pursued spirituality in her own way. Last year, she moved to San Diego and, at my father’s suggestion, attended services at a synagogue for the first time in years. She was looking for community in a place where she knew almost no one, and stepped for a moment back into the fold of our turbulent religious upbringing.

Last year, my sister attended services at the Chabad of Poway. She attended once, before work and school and boys cropped up as they so often do, but for that evening, she found a safe, comfortable place to exist as a Jewish person.

On the day of the Poway shooting, my father called her five times in quick succession, convinced that somehow she’d been caught in the crossfire. She wasn’t, of course, and after my father relayed this information to me, I lay on my back and stared at my bedroom ceiling, unsure how to examine the boiling kettle of rage and fear percolating inside me.

Jewish people don’t really leave Judaism in the same way that one can’t leave their sexuality or nationality, because Judaism is more than just a religion. Even after years away, my sister folded herself back into the community in an unfamiliar place, like riding a bike or putting on an old sweater. Judaism is home for so many people, regardless of their level of observance. The idea that someone could enter a sanctuary and decide to unmake it is sickening at best, but this chain of events struck a chord in me even under the numbing flood of constant violence.

“It’s different when it’s someone you know,” my father said, the unspoken weight of grief between us. We feel empathy for victims and their families, terror when we become them. But mostly I feel tired. Tired of being pulled taut like a rubber band in a Sisyphean state of stress. Tired of dodging the moving scope of hate, tired of watching it lazily drift from my people to my family to myself. The entire community is affected, the shockwaves overlapping like ripples in a pond. No event or attempt at connection can exist peacefully without the dread of hindsight. Synagogues should be devoid of that dread, which makes this violation so much worse. As the year progresses, I wonder how many more acts of violence we will have to suffer through, how much nearer the pendulum swings. For now, at least, I can hold my family close.