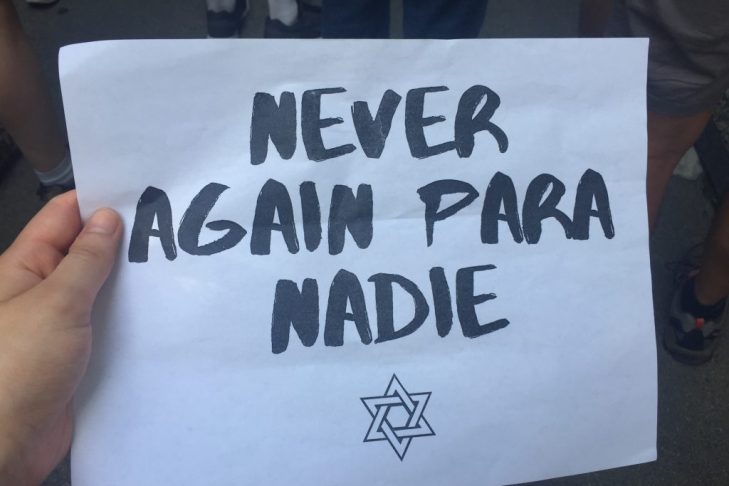 Growing up, I remember waiting on two important talks from my parents: the sex talk and the Holocaust talk.

I had heard vaguely of both, but only understood them as topics that I would learn more about when I was mature enough to understand their magnitude. When the sex talk finally did happen, it was short, uninspiring and I quickly repressed it.

However, when I got the Holocaust talk—or talks, as they more realistically were—I felt as if I was being handed down a powerful legacy that came with the responsibility to always remember and never forget.

The Holocaust talks began with stories and trinkets from my grandmother, who was fortunate enough to immigrate to the United States from France in the 1940s. We would sit on the couch of her home in Long Island and leaf through a scrapbook full of photographs, papers and notes that represented the childhood she never got to have, and the family members I would never have the chance to meet.

My formal Holocaust education began in seventh grade when my Jewish day school and temple Sunday school individually determined that 12 years old was mature enough to understand its magnitude.

My peers and I collectively shuddered at “The Boy in the Striped Pajamas,” held our breath for Anne Frank and her family as we read excerpts from her diary and applauded each and every Holocaust survivor who visited us during that year.

The following year, my eighth grade class and I visited Yad Vashem in Israel, and as I matured, my understanding of the Holocaust expanded and deepened.

I believe the goal of all these Holocaust talks was to foster Jewish trauma so that we could harness it for the power of good. I thought when we were learning about the Nazi regime and the rise of a ruthless dictator that our lesson was to be wary of certain strains of charisma in leadership; when we learned about the yellow stars Jews were made to wear, I thought our lesson was that differences between humans can be wielded to create fear and separation, and when I learned about the concentration camps, I thought the lesson was that all humans deserve to be treated with dignity.

My Holocaust education was important because it gave me a litmus test by which to recognize injustice: Are my leaders concealing evil behind charisma? Is difference being constructed in a way that disenfranchises people and creates inequality? Are humans being treated with dignity?

On July 2, I marched in protest with 1,000 other Jewish activists to let ICE know that it does not pass my litmus test. We marched together to clarify for members of the Jewish community and all people who are following this discourse that “concentration camp” and “Never Again” need to be recognizable beyond the context of the Holocaust. We marched together to honor the memory of the Holocaust by calling out injustice and taking action to prevent a similar atrocity from occurring again.

Frankly, what I view as significant and scary is that the people who helped design my Holocaust and Jewish education curriculums are too preoccupied with prioritizing and sanctifying their own trauma to recognize it when it happens to other groups.

The divisiveness in the Jewish community over the comparison of U.S. detention centers to concentration camps of the Holocaust has become a distraction from acknowledging the blatant disregard for human dignity.

Rachel Levy is a rising senior at the University of Michigan Ann Arbor and a Hadassah-Brandeis Institute Gilda Slifka summer intern.

This post originally appeared on the HBI blog on July 3, 2019.