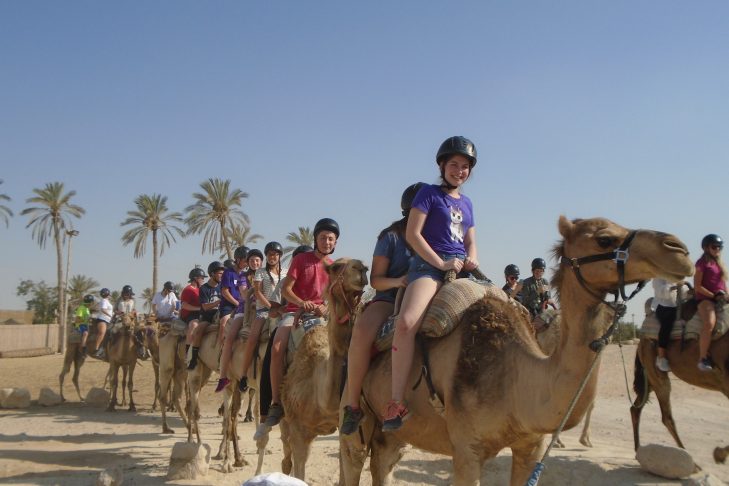 It’s amazing we have already traveled thousands of miles over the past nine days, beginning with our 6,000-mile trip from Boston to Tel Aviv, and we have covered more than 4,000 years of history. We already covered hundreds of miles in Israel, with hundreds left to go. By the time our trip is over, we will have seen, been in or gone boated on three of Israel’s four seas: Mediterranean Sea, Dead Sea, and the Sea of Galilee (a.k.a. Kineret or Lake Tiberias). We will have traveled in every direction, taking in the beauty of the land and as many of the sites as possible. For such a small country, it’s amazing how varied the regions are.

When I asked a couple of teens to describe the areas we visited with a word or phrase, these were some of their answers:

“Great!” I thought. “They’re paying attention to their surroundings.”

What I am really excited about is the ways in which teens are morphing into ambassadors for Israel. With very little measurable knowledge of Israel before the trip, in most cases, teens have been absorbing an enormous amount of information about Israel  More important, however, is that they are personally connecting to Israel. It’s exciting to hear them articulate their before and after thoughts and feelings about Israel.

Throughout the trip, we bring in inspirational speakers who teach teens how to be ambassadors and advocates for Israel. One teen admitted to me that she had no idea what I was talking about at Y2I pre-trip meetings when I mentioned Israel advocacy training. What interested her was how passionately Rachel Ellis and Korey Cohan, our teen Israel advocates, spoke about Israel. Now she said she gets it. She understands that she can speak from a first-hand point of view about what she saw and experienced in Israel. I asked her if what she is seeing and learning about Israel matches what she thought about Israel before the trip. “Not at all,” was her response. “I thought it would be a scary place, kind of like a desert everywhere with lots of religious people,” she explained. When I asked her how she feels about being an ambassador for Israel, she said that she can’t wait. “I want to tell everyone how amazing this place is! Honestly, Debbie, I am in love with Israel!”

SUCCESS! Experiencing Israel as a teen empowers teens to stand up for Israel, which, if you are not aware, is a skill that they will most likely need during their college years, as the anti-Israel and BDS Movement grows. Y2I gives teens the confidence and tools to build their Jewish pride that will serve them well at their schools, in their social circles, and during their college years. Some of the teens have been pretty honest and open about anti-Semitism they are experiencing at their schools and online. Having Israel advocacy workshops here, led by Charlotte of Stand With Us, meeting Israeli teens, and sharing in group discussions about what’s going on in their lives, are empowering your kids to stand up for Israel and stand up for themselves as Jews. It’s wonderful to see even the quietest of kids finding their voices.

The past two days have been incredible! We left for the desert Sunday morning, first stopping at the impressive Ayalon Institute, which housed the bullet factory that produced millions of bullets that enabled Israel to win the War of Independence (1947-1949). When we wrapped up our tour, 30 beautiful Israeli teens enthusiastically jumped off their buses to join 2017 Y2I. Within minutes, Israeli and American teens were becoming friends. Then it was on to the desert for a memorable experience. Camel rides, a traditional Bedouin dinner, drumming circle, bonfire and sleeping in tents, made the time we spent there really special. We woke up at 3:30 a.m. to climb Masada and witness the dawning of a new day with the rising of the sun. AWESOME! We climbed up Mount Masada to tour the magnificent ruins and learn about King Herod’s fortress and life on Masada. A real wonder of the world! Then it was down the mountain we climbed, followed by an incredible morning at the Dead Sea.

Teens loved the Dead Sea! Playing with mud, floating on water and being with friends…kind of like childhood fun-time. It was an intense 24 hours of doing incredible things and meeting wonderful new people.

Needless to say, our long three-hour bus ride was a welcome time to have a nap. Then as soon as we arrived at the nice Rimonim Hotel in Tiberias, batteries were re-charged for a night-time swim under a beautiful moon.

Being in the north beautifully illustrates for teens how critical it is for the U.S. and Israel to retain strong ties. The only true democracy in the Middle East with values that mirror our own, Israel is more than a friend to United States. She is the defender of freedom and democracy that we also deeply cherish.

Teens are beginning to understand that our relationship with Israel is built on shared values—freedom of religion, women’s rights, free speech and so much more. As teens learn about values held by Israel’s neighbors, it becomes quickly apparent that Israel is in a tough neighborhood. With all Israel has to endure, her existence is truly a miracle.

Tomorrow we will stand atop Mt. Bental at the Syrian border. Teens will look into Syria, and their eyes may not reconcile what the heart knows is happening in Syria. It “looks” quiet from where we will stand, but we all know what is happening within the borders of that country, right on Israel’s doorstep.

Having Israeli teens with us in the north is impactful. A couple of them already explained to our teens why the Golan Heights remaining in Israel’s control is critical to Israel’s survival. “Why invite the enemy in when we know what is in their heart?” posed one of the Israeli girls.

Tomorrow we will balance the intensity of the visit to Mt. Bental with lighter activities, including kayaking on the Jordan River and a fun dance cruise on the Sea of Galilee. We will end the day with an awesome illumination tour of the ruins in Beit She’an.

Time to get some sleep and get ready for an adventurous day in the beautiful north of Israel.

Your kids are happy and doing well. Sending love from them to you.