Close
Never miss a great event again!
Get the best Jewish events delivered to your inbox every Thursday with JewishBoston This Week.
By signing up, you agree to our Terms of Use and Privacy Policy.
2015 Greater Boston Jewish Community Study
View all 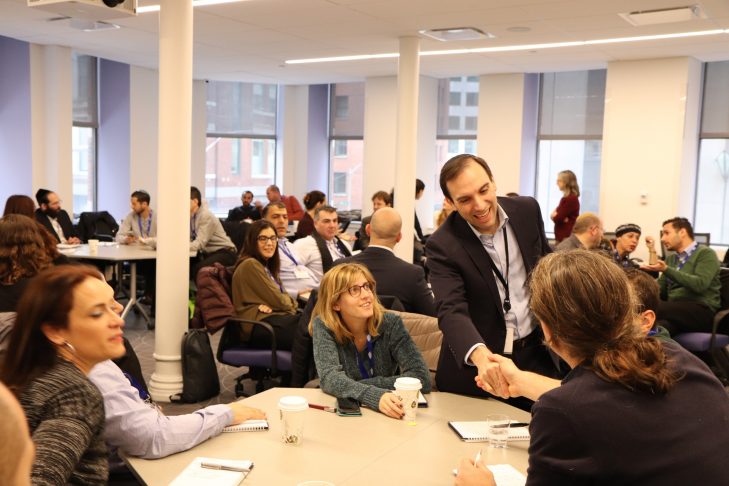 Rabbi Marc Baker, the new president and CEO of CJP, just wrapped up the first part of a yearlong “360Five Listening Tour,” which will take him to six cities in the Greater Boston area. In many ways, Baker has been on a listening tour for most of his professional career. Prior to arriving at CJP, Baker was the head of school at Gann Academy in Waltham for 11 years. Gann is a pluralistic Jewish high school in which students come to the school from a wide range of Jewish backgrounds, experiences and perspectives that Baker described as “coming together under one roof day in and day out.” The school is a model of “a Jewish future that is stronger not in spite of its diversity but because of it.”

I recently attended one of Baker’s listening tour stops in Cambridge. While the conversation that ensued is off the record, Baker framed the evening with some of his biography, as well as his aspirations in his new role. Baker was born and grew up in the Boston area. His family hails from Lynnfield, and he lives in Brookline with his wife and four children. He told his audience of about 100 people that when the prospect to head CJP opened up, “It felt like the universe was unfolding here.”

Baker is forthright about following Barry Shrage, whom he described as a “beloved, world-renowned federation leader.” He acknowledged that he and the Greater Boston Jewish community are in a moment of transition. “It can be scary, but it also creates a huge opportunity to see where we’ve been and where we want to go,” he said. Baker’s new job also comes on the heels of the 2015 Greater Boston Jewish Community Study, an endeavor that is updated every 10 years and informs CJP’s Strategic Plan, which Baker is currently working with CJP staff to finalize.

Baker spoke at length about the findings of the Community Study. He noted that Jews are now identifying differently than they did 10 or 20 years ago. Jewish communities are more diverse. “Members of our Jewish communities think differently, marry differently and vote differently,” said Baker. “In Greater Boston, it’s important to remind ourselves that in every spectrum we have more diversity than we realize. We should always remind ourselves what voices are in the room and what voices are we not hearing, especially when we are in our own echo chambers.”

He further observed that the Jewish community has not only significantly changed, but certain segments of it are larger than what was initially realized. He cited the Israeli, Russian-speaking and LGBTQ Jewish communities as having grown considerably in the last decade. “We have to ask ourselves how are we going to build a Jewish community that is hospitable and welcoming, as well as relevant to a wider range of Jews than we’ve ever had before?” he said. “How can we make sure that Jewish life is relevant and compelling to every segment of our community, in particular our next generation, who may not be especially compelled to participate in any of our institutions?”

Baker noted that one of his primary goals for the listening tour is “to put meat on the bones of the Strategic Plan, and to go deeper into understanding where our community is so we can understand where we should be going and how we’ll get there together.”

Three meetings later, I caught up with Baker over the phone and asked him to reflect on what he learned and what he heard over the course of his tour so far. “It’s given me a macro perspective on the Jewish community,” he said. “Every new conversation is filling out my picture of the community and brings new insights and perspectives.” He said he was impressed that there were so many people who wanted to be connected to Jewish life and to the Jewish community. For young people, he observed that the “vibrantly engaged among them who create community for themselves said that CJP needed to share resources and infrastructure. It was a powerful moment given that so many others across the Jewish world have that infrastructure. That was an illustration of the degree to which we have the people and the institutions, but they have to be aligned and connected in the right places.”

Baker said he was also impressed with the opportunity to hear stories and to “put faces” on the numbers and demographics. He emphasized again that most people he met on the listening tour—including a 95-year-old woman and a young mother looking for a religious education for her children—told him unequivocally that they wanted connection. He also pointed out that his South Shore location was hosted at Orchard Cove, a senior living community in Canton, which he said sent “a powerful message. What I continue to learn from our seniors is what we already know—there is an entire generation of people who have a lot more Jewish life to live. They not only want dignity, but they also want meaning.”

Another theme he said was repeated throughout the tour was “hearing the urgency around the need for us to create a space for civil discourse, in particular with regard to Israel. There is this question of the urgency of finding ways to bring people together. What is CJP’s role as a convener of these types of conversations?”

Baker also said another paradigm he’s given a lot of thought to has been partnering with, rather than programming for, diverse groups of people. “For us it means making sure our lens is through people and partnership, and not just through programs,” he added.

As for the future, Baker said he is excited and “deeply grateful” to be at the helm of CJP. “We have to be a community that stays together across our different experiences and perspectives,” he said. “We have to hear one another speak our truths and build from that place. I’m very encouraged and very inspired by what I have seen so far.”