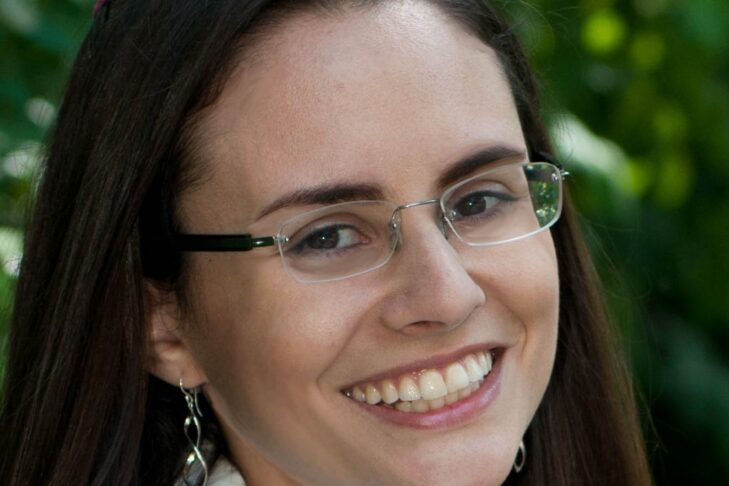 Rabbi Raysh Weiss begins her role as co-senior rabbi at Temple Israel of Natick at the end of July. She will serve as spiritual leader alongside Rav Hazzan (Rabbi Cantor) Ken Richmond. She happily anticipates the co-rabbi leadership model. “It’s a healthy way to encourage collaborative and creative thinking,” she said in an interview. Rabbi Weiss succeeds Rabbi Dan Liben, who recently retired after 30 years at Temple Israel. She received her ordination at the Jewish Theological Seminary in New York in 2016. In addition to being a rabbi and scholar, the multi-talented mother of two is an educator, musician, writer, social activist, filmmaker and visual artist.

Happily anticipating her role at Temple Israel, Rabbi Weiss said that she admires “Temple Israel’s palpable sense of community. I look forward to working with Rav Hazzan Richmond and being part of the temple’s great Shabbat community, which is stronger than many congregations in the Conservative movement.”  “I am so excited about Rabbi Raysh Weiss bringing her insights, warmth, vision and leadership skills to Temple Israel of Natick,” said Rav Hazzan Richmond.  “I look forward to partnering with her to serve this amazing community.”

In the past year she visited Temple Israel, conducted services and met with congregants. “The time I’ve spent visiting the Boston area has helped to make it feel even more like home. And I have roots here—my mother’s entire family is from Worcester.” Rabbi Weiss pointed out that she is not the first member of her family to work at Temple Israel. “My brother-in-law of blessed memory, Rami Rank, was youth director about 20 years ago. Unfortunately, he died last year, well before his time, at 38. When he was at Temple Israel he was a college student working with temple youth, and he absolutely loved it.”

Rabbi Weiss served most recently as rabbi of Beth El of Bucks County, Pennsylvania. She previously served as rabbi at Shaar Shalom Synagogue in Halifax, Nova Scotia, where she also held the honorary positions of Jewish chaplain at Dalhousie University and the University of King’s College. During her time in Nova Scotia, Rabbi Weiss was one of two women serving as full-time senior rabbis of Conservative synagogues in Canada.

The Chicago native grew up in an Orthodox household in a tight-knit community. A life-changing experience when she was a teenager sent her in a direction she had not yet anticipated: she attended the bat mitzvah of a deaf girl, a family friend, in Chicago. “I was in a sort of trance at the service,” she recalled. “This young woman pronounced the Hebrew perfectly and, using throat vibrations, sang on key.” The future rabbi was inspired to have her own bat mitzvah several years later, although in Orthodox communities girls generally do not lead services or read from the Torah. She found a tutor who taught her Torah trope, and she told her parents of her bat mitzvah service plans, which she had been organizing with her sister’s friend. The friend and the rabbi’s sister were active in Harvard Hillel’s traditional, egalitarian minyan, where the service was held. Her parents attended the service, along with members of her mother’s family from Worcester.

“It was an empowering experience,” she recalled. She soon became friends with peers who worked as professional Torah readers, and took on this role herself. “Working at shuls was the turning point for me, leading to my ultimate goal of becoming a rabbi.”

Higher education led to Rabbi Weiss’s multifaceted academic, social and cultural ventures. She graduated from Northwestern University with a degree in comparative literary studies, philosophy and radio/television/film in 2006. Music had always been an important part of her life; she founded and led Northwestern’s klezmer band WildKatz. She produced the album “Party Like It’s 1899.” Rabbi Weiss later spent a year as a Fulbright Research Fellow in Germany doing fieldwork in ethnomusicology, with a focus on klezmer music in post-war Europe. In addition to singing, Rabbi Weiss plays a variety of instruments, her favorite being the saxophone. She has also studied the music of other cultures, including that of Somali Muslim women and Brazilian samba.

Writing is also a passion. Rabbi Weiss has been writing for Jewish publications since she was a graduate student. While in Nova Scotia, she was a regular contributor to The Canadian Jewish News. “I’ve done a lot of freelancing, which I really enjoy, and have published some of my sermons and lectures,” she noted. She has written for publications including Tablet Magazine and My Jewish Learning. Rabbi Weiss also earned a Ph.D. in comparative literature and cultural studies at the University of Minnesota, writing her doctoral dissertation on Yiddish musical cinema of the early 20th century.

In addition to her many accomplishments, Rabbi Weiss founded YentaNet, a volunteer matchmaking organization in New York, which has had an impressive degree of success. “I used my intuition to make suggestions to people,” she explained. She eventually became flooded with requests and decided to train other matchmakers. “I had a good run,” she recalled. “But I’ve cut back. I love it, but it’s very time-demanding.”

Looking ahead, Rabbi Weiss discussed issues that are critical to the Jewish community. “The biggest challenge relates to our optional culture. This situation is not just a Jewish one, it’s a generational issue,” she said. “Judaism is one of many choices for people, and this is symptomatic of other trends. Some look at Judaism as a discretionary value. There are also serious issues with affordability of day schools. We need to work on how we can better support Jews of all incomes.”

Rabbi Weiss also stressed the need for strong ties with Israel. “It is important to strengthen our relationships with Israelis, to visit Israel, to be able to hear Israeli stories. We need to hear it in our kishkes, and this is best done through actual people.”

Looking back at her career to date, Rabbi Weiss noted, “The last few years have been so unpredictable, one can’t really assume anything. But as a Jew, I think we’re especially well-equipped to adapt to crises. This is how we have survived as a people.”

“The Temple Israel community is incredibly fortunate to be welcoming Rabbi Raysh Weiss as our co-senior rabbi,” said Marlene Dodyk, president of Temple Israel. “Her intellect, passion for engaging with families, love for Israel and commitment to social justice make her an outstanding addition to our community.”