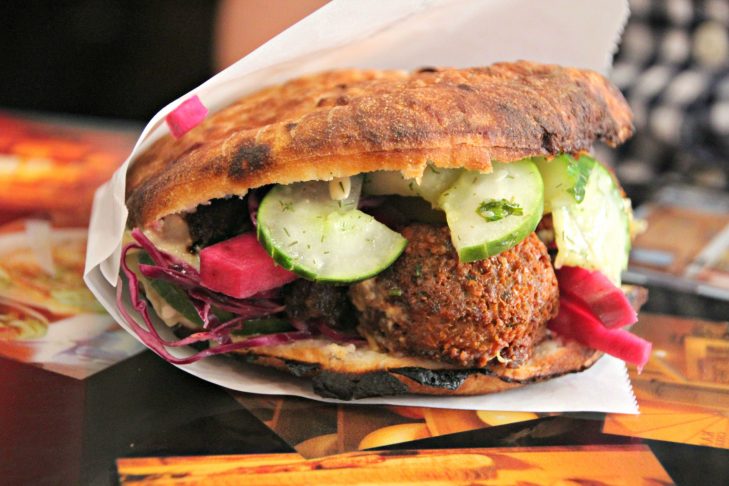 A great falafel sandwich needs more than great falafel. Of course, the falafel should be good—ideally well-seasoned and nutty, crispy on the outside and moist on the interior. But even if you get that right, you have a half dozen other things to consider. Do you top it with pickled turnips or dill pickles? Diced cucumbers and tomatoes? Do you shred the cabbage or chop it? Do you top it with hummus or tahini? And then there’s the pita. Is a soft, puffy pita best, or is a thin, crisp, roll-able pita better?

I learned two things while researching this roundup: Any number of falafel toppings are good if they work in harmony, and how photogenic a falafel sandwich is does not relate to how good it tastes.

These nine falafel sandwiches, culled from your responses to our Facebook inquiry, are all top-notch, but they’re not identical. Read on for tasting notes on the variety of great falafel sandwiches in the Boston area, and tell us about your favorite (whether it’s on this list or not!) in the comments below.

The first thing you notice about this kosher institution’s beloved falafel is the pita it’s served on, which is incredibly soft and plush. The falafel is the perfect two-bite size—about the size of a ping-pong ball—and very well-seasoned. It comes with a generous schmear of hummus or baba ghanoush, as well as Israeli salad, Israeli pickles, lettuce, red cabbage and lots of tahini dressing. It’s highly recommended with their homemade hot sauce and lots of extra napkins.

This popular spot’s falafel sandwich avoids two common falafel-eating pitfalls. First, the falafel is crushed into large chunks as the sandwich is assembled, so you get some in every bite instead of alternating between bites of falafel and bites of toppings. Next, the thin, soft pita is wrapped tightly enough that everything inside—which includes slices of tomato and cucumber; tahini sauce; creamy hummus; tangy pickled turnips; and long strips of cucumber pickles—stays contained. The sandwich is also available on saj, a thin, delicate Middle-Eastern flatbread. (Bonus: You can buy a $1 bag of fried pita and saj chips for snacking at home.) 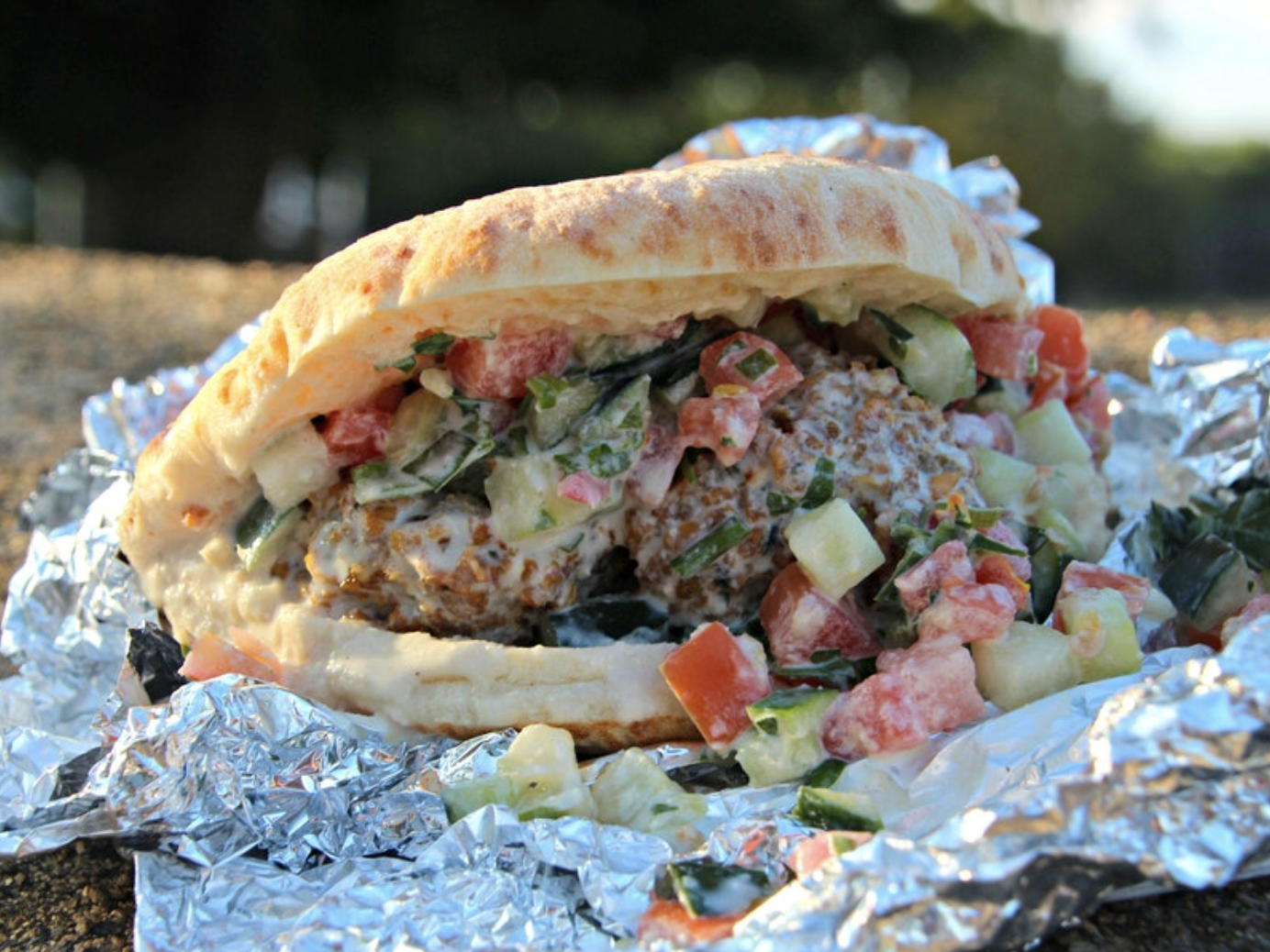 The Chubby Chickpea’s offering is one of the most straightforward and well-seasoned falafel on this list. The imported Israeli pita is thick and pillowy soft, and the sandwich contains just the bare minimum staples of Israeli salad (perfectly cubed tomatoes and cucumbers in a light tahini dressing) and garlicky hummus. The falafel itself is the focal point. It’s looser and less tightly packed than others, with some crunchy bits and flecks of cumin and coriander seed. 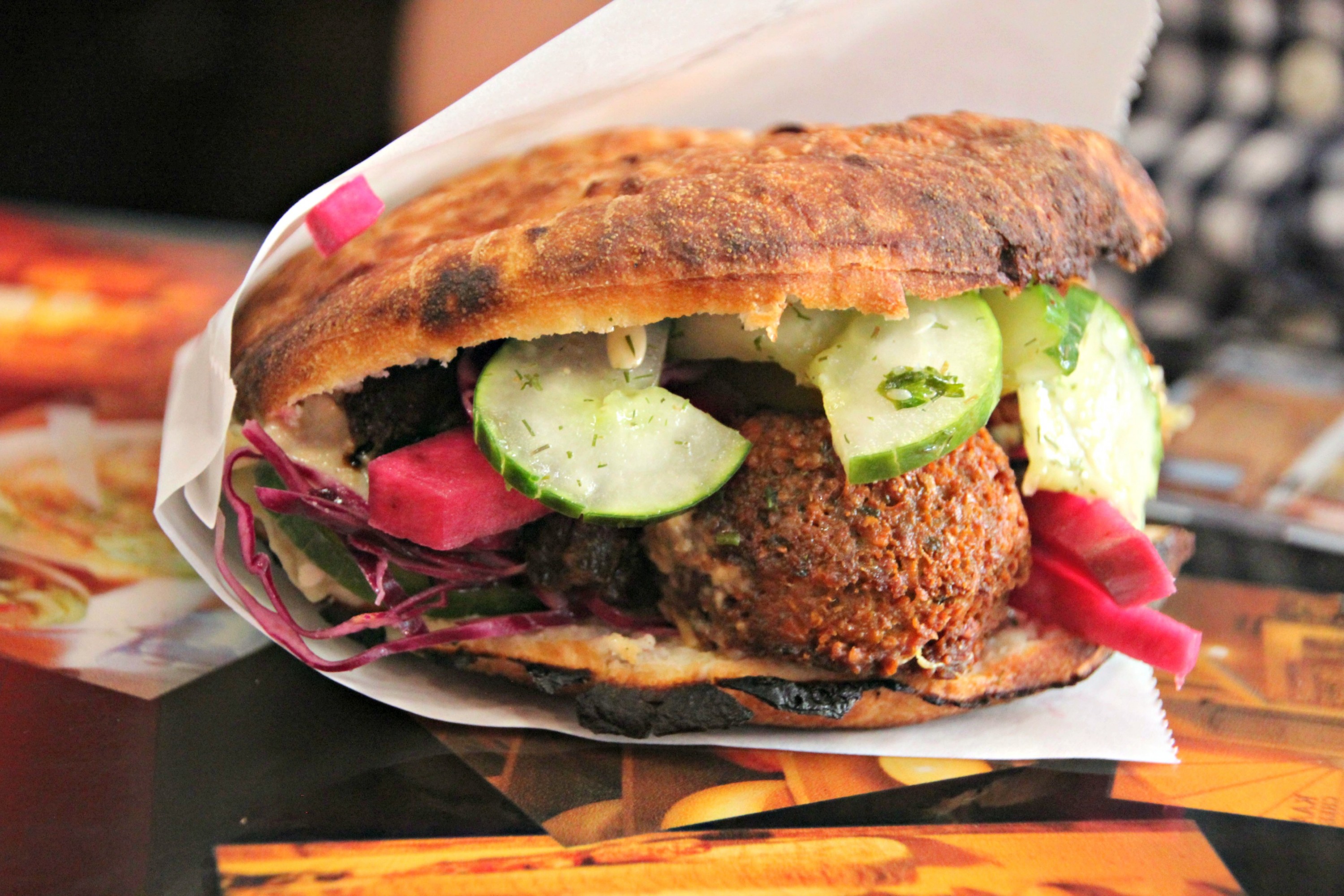 This lightly burnished pita and coarse falafel come with two things the others on this list don’t: advice from the seller to “crush the balls” (so they integrate better with the toppings), and access to the shop’s 22-item condiments bar that features everything you can think of, from the traditional staples to the less-expected inclusions. Like your falafel with a kick? Top it with bright green lethal jalapeno-cilantro sauce. Prefer your falafel with extra veggies or even more chickpeas? Add scoops of fried eggplant salad, pickled cauliflower and chickpea salad. And don’t worry about fitting all the toppings in the pita on one trip; the metal pita holders on the tables will keep your sandwich upright as you revisit the toppings bar. 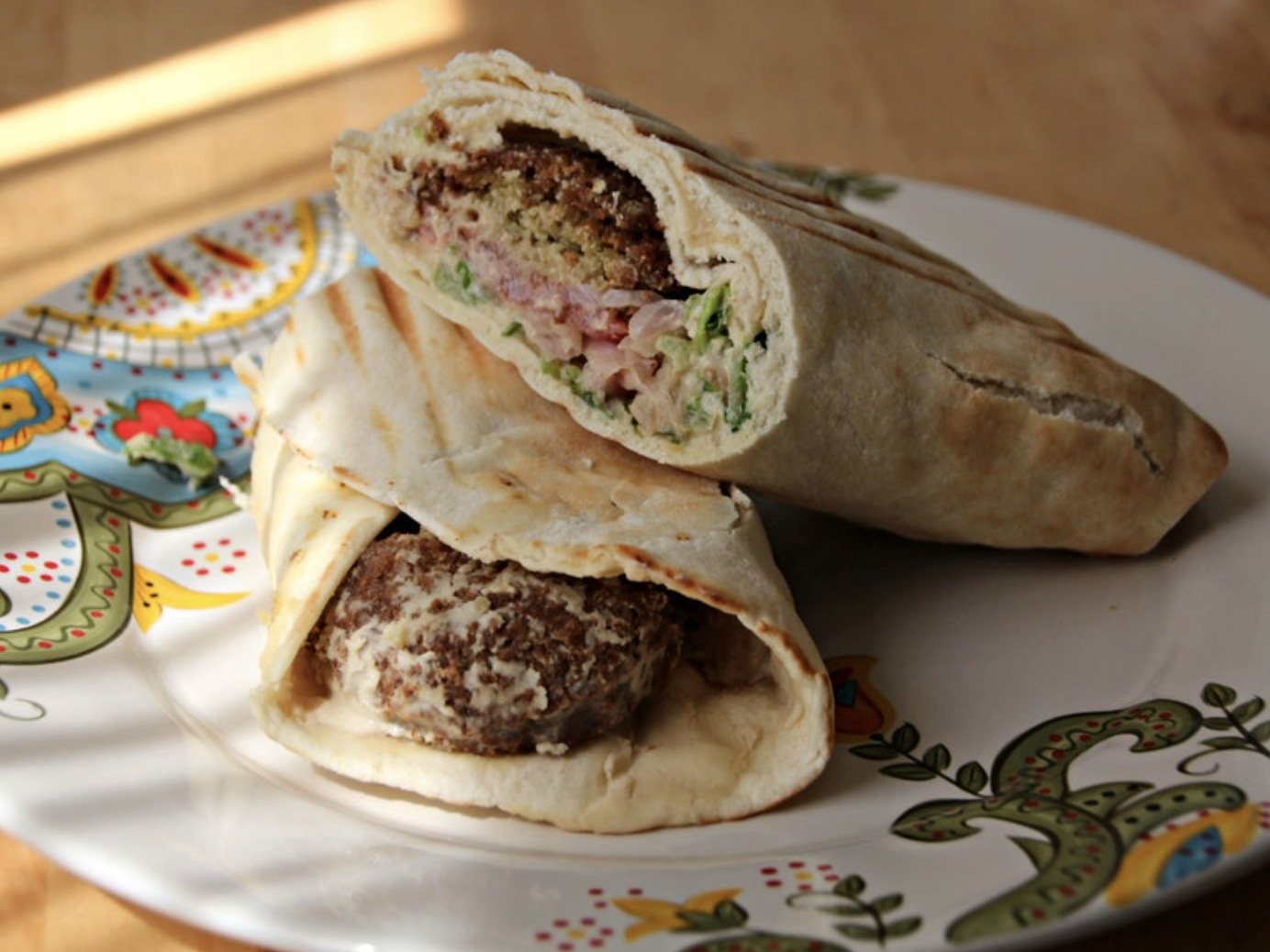 The Loading Dock’s name is a misnomer. The almost 2-year-old restaurant is a café, market, full-serve restaurant and wine store all in one, and it manages to balance all its identities. Its falafel is also well-balanced. It comes with a healthy assortment of toppings—lettuce, tomato, cabbage slaw, tahini sauce and some zingy pickles—but it’s not overwhelmed with add-ons. The thin (but not dry) pita is pressed, which helps to seal it, making the sandwich an unusually tidy affair. 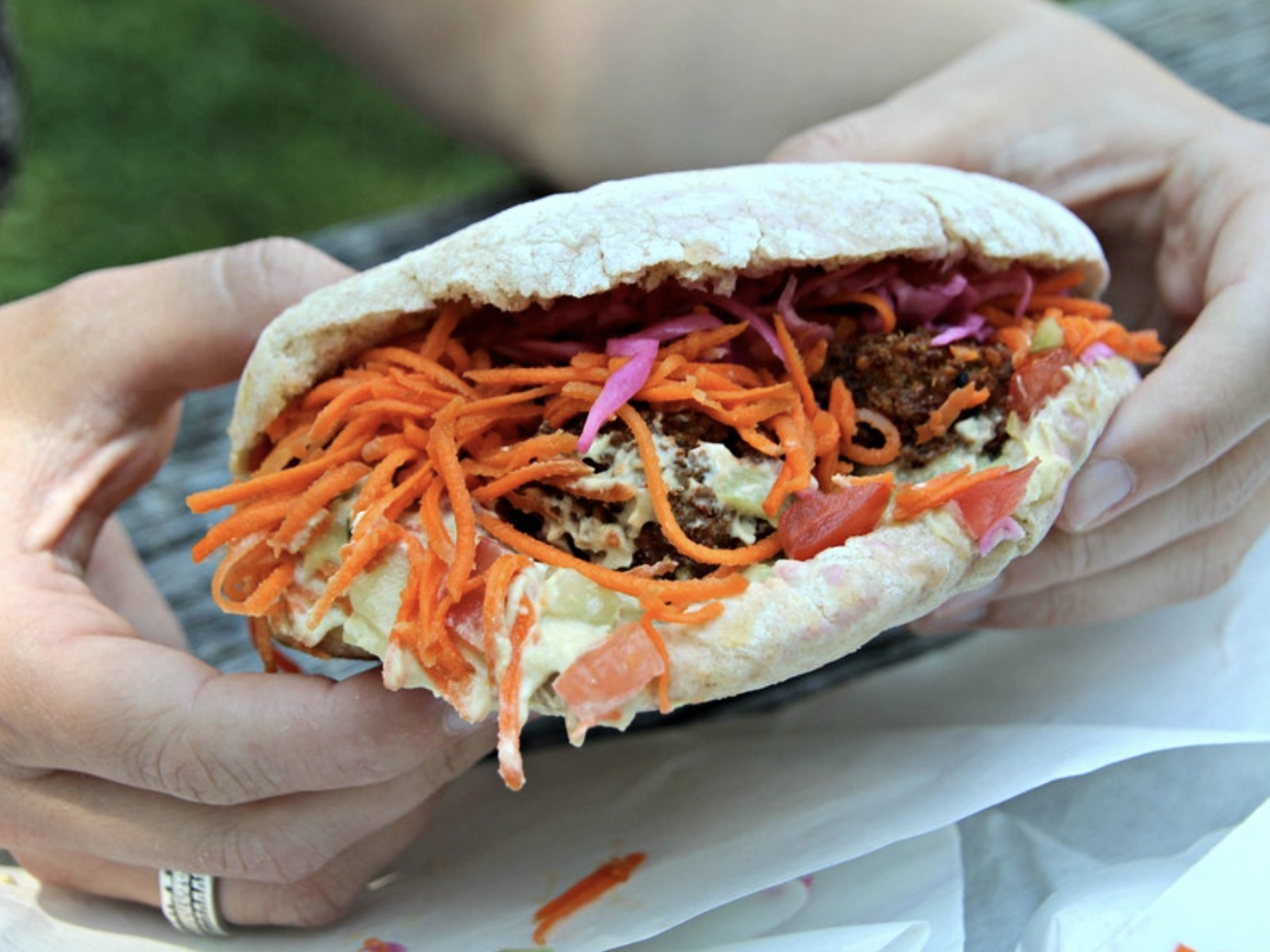 Clover is upfront about its non-traditional take on falafel. (In fact, they don’t even call it falafel.) It’s certainly the most colorful dish on this list, with its generous portions of grated carrots and thinly sliced pickled cabbage. The vegetables are stuffed into the thick, soft, made-in-house pita, along with Israeli salad, lightly pickled cucumbers and small, well-seasoned balls of falafel. 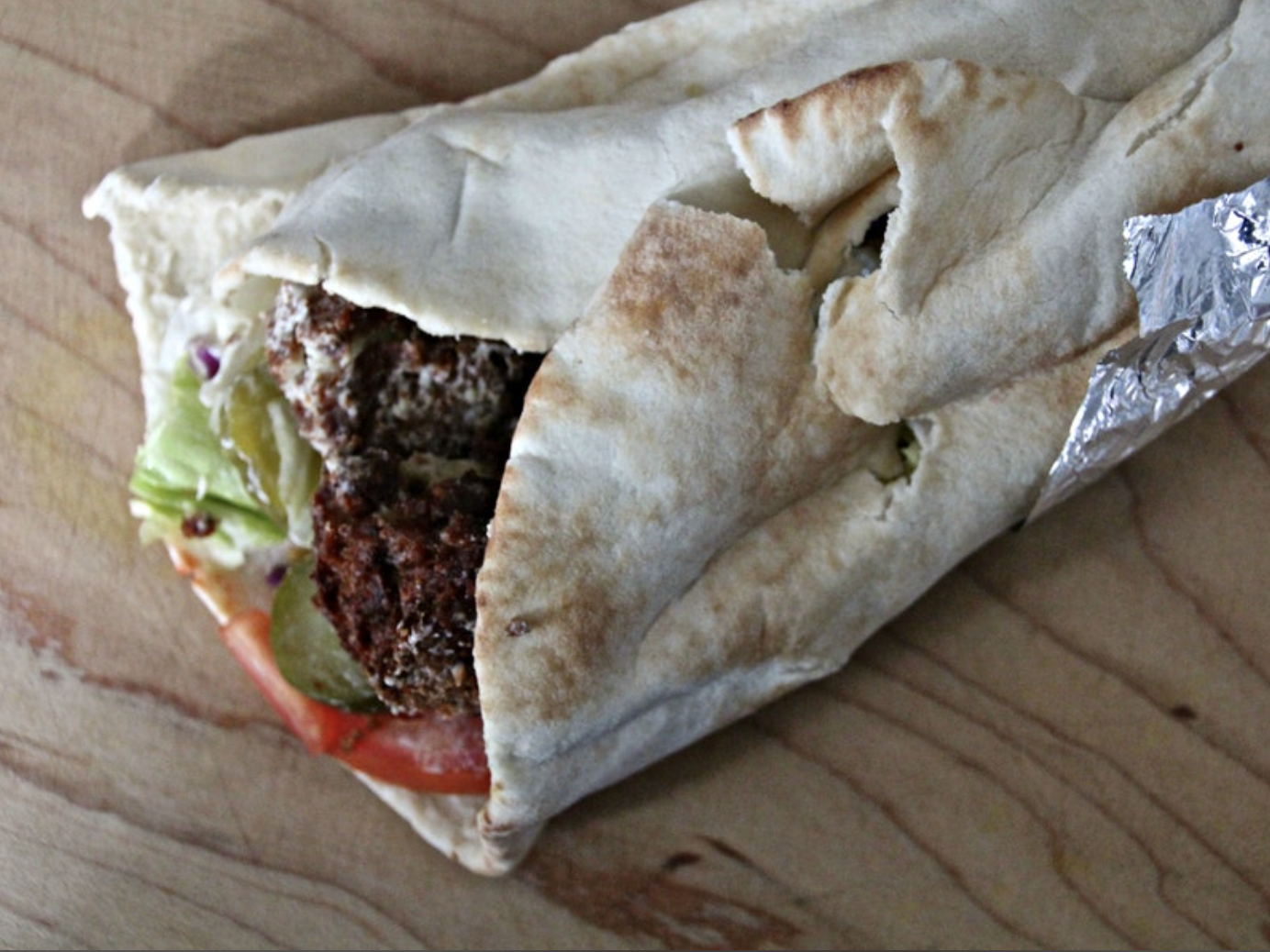 Over the course of Cafe Jaffa’s 25 years in business, it’s been written up by several reputable sources. Taste the falafel and it’s easy to see why. The balls are crispy, coarse and nutty-tasting. The thin, floppy pita is wrapped tightly around lettuce, pickles and slices of tomato and cucumber, all napped in a light sesame-tahini sauce. It’s a race against time to finish the sandwich before the pita starts to fall apart, but that shouldn’t be a problem. 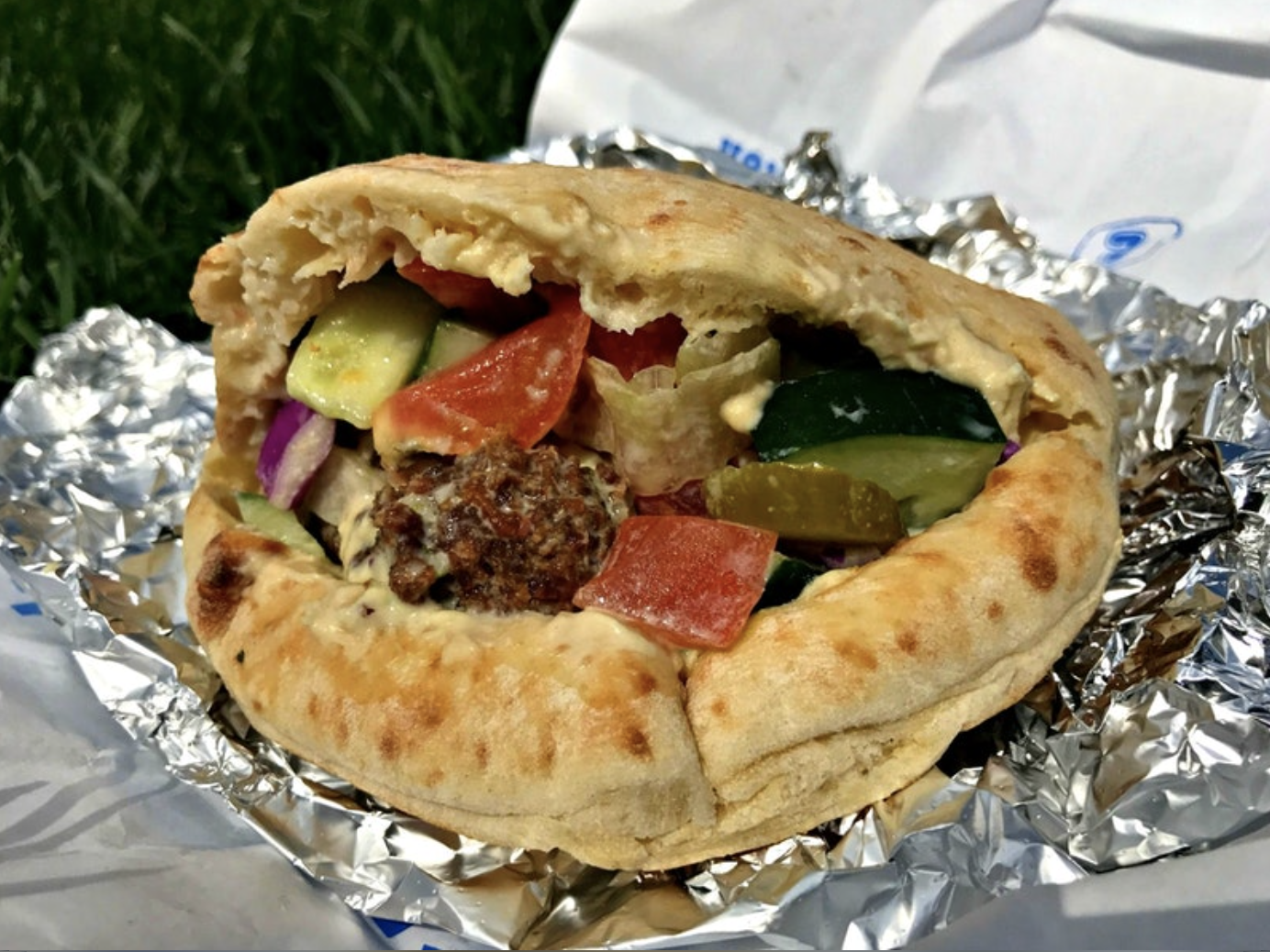 This kosher-style food truck’s falafel sandwich is a crowd-pleasing, traditional take on the classic. The pita is impossibly plush and the tahini is pronounced but not dominant. The chunks of tomato, cucumber and cabbage are large and disparate, so they don’t get overwhelmed by one another. And the pickles are thick, so their sweet-sour combination really shines through.

Nestled among the farm stands and food stalls, Inna’s Kitchen has been a part of the Boston Public Market since it opened in August 2015. Its sandwich is filled to the brim with crispy falafel balls but still feels compact. The toppings—lettuce, Israeli salad, pickles and pickled red cabbage and turnips—go the depth of the soft, thick pita so you’re not trying to eat around them, lest you finish them after only a few bites.

9/10/2021 Top Pick   Edit
When We Return From Lockdown, How Are We Transformed?
By Rabbi Leonard GordonFor B’nai Tikvah
View All
© 2021 Combined Jewish Philanthropies of Greater Boston. All rights reserved.
Concept, design & development by
RGB Media
Powered by
Salamandra