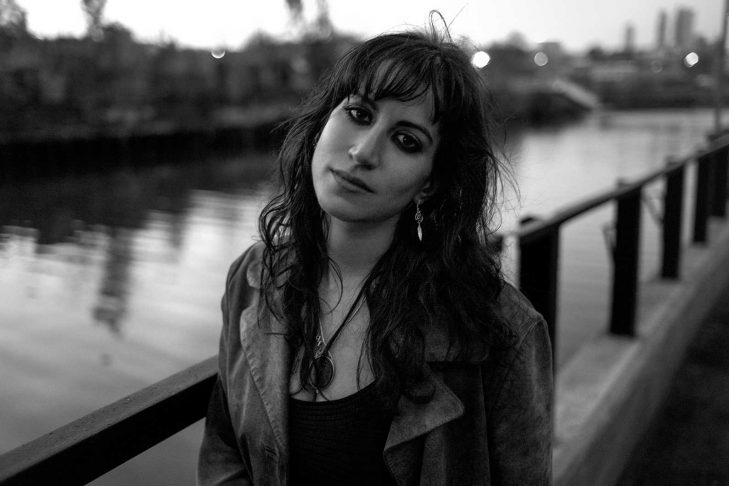 Ahlam is the American child of an exiled Palestinian father and an Israeli Jewish mother. Palestinian displacement and the resonances of Jewish tragedy are ever-present in their marriage. Ahlam grows up quickly under the influence of her rebellious friend Laura. The two become outcasts in their high school and eventually run away to New York together to become artists.

The story alternates between scenes in the haunted Sonoran Desert and crowded cityscapes. Ghosts continuously haunt Ahlam as she roams the desert and then struggles in the city.

“Sonora” won the 2018 American Academy of Arts and Letters Rosenthal Family Foundation Awards and was a finalist for the PEN/Robert W. Bingham Prize for Debut Fiction. Assadi recently spoke to JewishBoston about her award-winning novel.

What’s the genesis of this luminous novel?

There are multiple strands to my answer. For a long time, agents, friends and writing professors who found out my personal background wanted me to explore it in fiction or non-fiction. I couldn’t figure out a way to do it right. I grew up in the United States, not in Israel or Palestine. There was nothing I could say about the conflict that would have integrity for me.

The book started as an assignment about James Joyce’s “The Dead” for my master’s degree in fine arts at Columbia. I found myself writing a piece about kids in my high school who died in these mysterious ways. The night I wrote the piece, I had found out another student had died. In my high school, we considered these deaths a “curse.” I then thought of echoes from ancient curses in the Middle East, and the displacement of Native Americans. These strands started to fall into place for me. They carried themes I wanted to pursue in my first novel. The landscape is very integral to this novel. What does it represent to you?

I was born in New York City, and I moved to the desert when I was 5. I came back to New York for college when I was 18. That was just over 14 years ago. Growing up in the desert was expansive; it opened my mind. It could also be haunting and lonely. The aridity and lack of water lend themselves to a place that’s not hospitable for people to live in. New York is the opposite. It’s brimming with life—almost too much so—but one can rarely see the horizon. In New York you can be so anonymous, it creates a feeling of loneliness. These two places of mine—the desert and the city—are very different, but they can inspire similar feelings because of their largesse.

On a personal level, my father’s family left Israel/Palestine for Kuwait and lived in the desert. On a broader level, the ancient traditions of both my cultures consist of wandering in the desert. The desert is an in-between place—a place of exile that is resonant with symbolic context. I wanted to mirror that feeling in the book. I knew the desert very well. That was my toolbox for this book.

How do you connect to your dual identities?

It’s actually quite even; I identify with both identities. I grew up celebrating the High Holidays as well as acknowledging major Islamic holidays. My parents always emphasized spirituality over religious tradition. By my father’s family coming later to America than my mother’s family, they were more predominant in my life than my Jewish family. Their culture and their food were more emphasized than the Jewish aspects of my life. My mother’s family has been in America for longer and was very assimilated. As a result, one family had become more American than the other.

You characterized the rebellion of your protagonists Ahlam and Laura as “sanctimonious.” How does that relate to your life?

I was very studious in high school and educated at an Ivy League institution. Once I graduated from college, I met artists and lived in a bohemian community. A part of me lost track of my old past, but that helped me grow as a writer and a person. Both characters are versions of me and people I have known. What would have happened if I had taken a completely different path? What if I just showed up in New York without attending an Ivy League university wanting to be an artist and living as an artist? The reality is that institutions provide support. Without them New York can be an anonymous, oblivious city.

How do you marry your poetic language to plot and character?

By nature, I’m much more concerned with language at the line level. I wanted to make every line as beautiful as a poet might. In a story, there’s a necessity for plot and character to fully realize the vision you want to present. I wanted to write beautiful sentences as well as write a story about people who continually try to escape their past. The novel was the right container for that. Yet it was also a struggle. Marrying poetic language with a forward-moving story is difficult. I revised and revised and had to “kill a lot of darlings.”

What’s next for you?

I just finished a novel and sold it to Riverhead Books. “Sonora” was fictionalized autobiography—an interpretation of my biographical life. I wrote into my own experiences as best I could in “Sonora.” At this point, I need to accumulate more life experience before I write an actual memoir.