The major holidays have come and gone, and Jewish Bostonians are hanging up their Simchat Torah dancing shoes, putting their Sukkot into storage, and beginning to hibernate for the cold months ahead.

Such is hardly the case down at Occupy Boston, where a large group of enthusiastic Jews continue to stand in solidarity with the Occupy movement, fusing their passions for Jewish ritual and social justice through prayer services, discussion groups, and arts and culture initiatives.

According to Jocelyn Berger, a current student at the Fletcher School of Law and Diplomacy at Tufts University, the “Occupy Judaism” movement gained initial momentum at Occupy Wall Street, and reached Occupy Boston when a group of individuals saw the need for Kol Nidre services.

The “Occupy Judaism” movement has increased in breadth and depth since, and has spawned similar movements in cities like Los Angeles, Seattle, Vancouver, and Washington D.C, among several others.

“We put [Kol Nidre services] on Facebook, and then 100 people showed up,” said Berger. “I was really moved by that experience and wanted to continue the sense of community and purpose.”

Berger, who spent several years working with the Jewish community in San Francisco, found a unique experience at Occupy Boston, where a diverse Jewish community could unite and pray together, washing away the boundaries of age, socioeconomic status, and level of religious commitment. 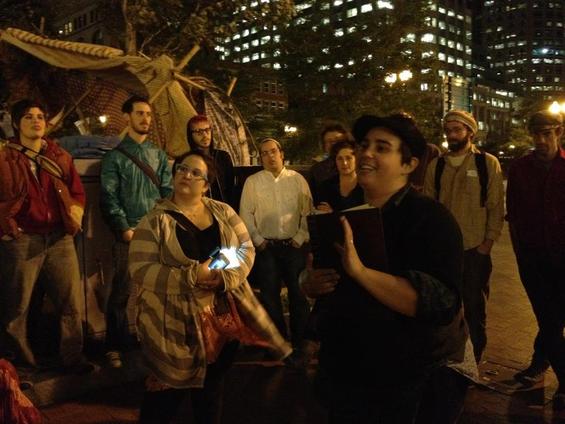 “[Services] aren’t in a synagogue, and are literally out amongst the people,” she said. “Our Kol Nidre service was transformed from what would normally be an individual experience of repentance, to a collective social experience of forgiveness.”

After the High Holidays, the Occupy Judaism movement grew from a mere religious observance to an all-encompassing Jewish experience. Several local synagogues and Jewish community organizations have collaborated to run programming in and around Occupy Boston’s sukkah, which was erected in Dewey Square and was open to the public throughout the eight day festival.

Among the events were a potluck dinner with the Boston Workmen’s Circle, a teaching and text study with Rabbi Victor Reinstein of Congregation Nehar Shalom, and various programming orchestrated by the Jewish Labor Committee.

But religious services remain the fabric of Occupy Judaism’s existence, as a significant Jewish presence continues to turn up for Kabbalat Shabbat each Friday.

Liz McGarry, a university student, has attended two Shabbat services so far, and plans to continue making the trek to Dewey Square due to Occupy Judaism’s innovative take on the Shabbat experience.

“I really like the way they’re able to incorporate the Occupy Boston mission into the service,” she said. “We’ve had really meaningful discussions where people talk about what we can do to repair the world and what our responsibilities are as citizens and as Jews. That’s why I keep coming back.”

College students, working adults, Rabbis, Jewish professionals, and families alike have shown up for Shabbat services at Occupy Boston, perhaps to experience the novelty of praying in the middle of the financial district and banging on buildings to carry the beat to “Lecha Dodi.” But what they found was something much deeper—a venue to swap stories of social justice and engage in open dialogue about the future of the Occupy movement, all while getting to belt out familiar tunes and sing in tight embrace with strangers who share a similar mission.

Berger used a highly participatory approach when she led Shabbat services in the Sukkah, and felt it was successful in a Jewish context.

“[It] provides a familiar religious setting construct of a lot of repetition and a lot of back-and-forth, so people are encouraged to participate and share their ideas,” she said.

As a new member of the Boston Jewish community, Berger was “shul shopping” before the High Holidays. and is delighted that she found a cohesive and supportive Jewish community at Occupy Boston.

“This is where I want to be. To bring together my political voice with my Jewish voice is an incredible fusion,” she said.

And while the future of the Occupy movement remains unclear, much can be learned from the enthusiastic crowd that continues to assemble on Friday nights, Saturday mornings, and throughout the week for a variety of Jewish and social justice programming.

“I’ve been totally blown away by the reception we’ve gotten, and people continue to come in through social media and word of mouth,” said Berger. “The movement is transforming for individuals, and history will show that this was a transformational moment in time.”

As the movement trudges forward into the colder months, Occupy Judaism will strive to expand its programming and reach out to diverse groups in the Jewish community and beyond. Berger hopes to collaborate with Occupy Boston’s Faith and Spirituality tent to orchestrate interfaith dialogues and text studies.

The Jewish community has undoubtedly created something special in the heart of Dewey Square, something that has inspired Bostonians to move beyond the walls of a synagogue and contribute to something greater.

“I’ve been reminded that there’s a bigger Jewish community out there,” said McGarry. “I’m more likely to seek out different Jewish experiences now.”