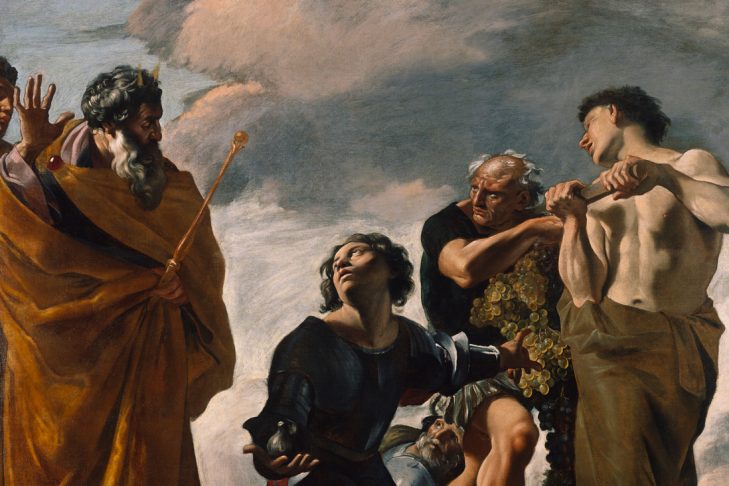 “Moses and the Messengers from Canaan” by Giovanni Lanfranco

In the previous article, we described Israel’s time in Egypt, how they prospered while they were united under Joseph’s leadership, and how they assimilated after his passing, which then turned the Egyptians against them. In this article, we will explore Moses’ efforts to reunite the tormented and enslaved people and thereby redeem them from their oppressors and bring them out of Egypt. We will also show that once they united and were redeemed, they were tasked with being “a light unto nations,” namely to pass on their unity to the rest of the world.

Despite their worsening situation in Egypt, Israel did not unite until the arrival of Moses. When he arrived, he began to reunite Israel until, eventually, they were able to escape from Pharaoh’s rule.

Once out of Egypt, at the foot of Mount Sinai, the people of Israel solidified their unity to the point that they became as one. This is why the great 11th-century commentator Rashi described them as being “as one man with one heart.” That level of unity was the requirement for the aggregate of strangers who subscribed to Abraham’s message to be “officially” declared a nation. There, at the foot of the mountain, was the birth of the nation of Israel. The example of disunity and enslavement versus unity and redemption that the Hebrews had experienced in Egypt was to be a lesson for them to maintain their unity no matter how intense their egoism grows. As we will see throughout this series, the linkage between disunity and adversity has not been broken since. Regrettably, neither has the lesson been learned.

When Moses united the people of Israel, he did not intend to unite Israel only for their own sake. Just as Abraham wanted to unite all the Babylonians but had to do with those who followed him, Moses wanted to help the whole world find unity, not just the Israelites.

Accommodating Moses’ wish to spread the ideology of unity to all of humanity, immediately after the people of Israel were declared a nation, they were tasked with being “a light unto nations” (Isaiah 42:5, Isaiah 49:6), namely to spread this unity. In “The Commentary of Ramchal on the Torah,” the great 18th-century kabbalist wrote, “Moses wished to complete the correction of the world at that time. This is why he took the mixed multitude, as he thought that thus would be the correction of the world…However, he did not succeed because of the corruptions that occurred along the way.”

Similar to Ramchal, in the 19th century, Isaac Hever Wildman wrote in his book “Beit Olamim,” “That was Moses’ prayer and blessing to the generation of the desert, that they would be the beginning of the correction of the world.”

Even more astounding words regarding the purpose of establishing the people of Israel were written in the book “Maor VaShemesh”: “‘That He may establish you today as His people’ means that by that you will have revival, you will be saved from all calamities. Afterwards He said to them, ‘Now not with you alone am I making this covenant,’ meaning that being saved from any harm by bonding was not promised only to Moses’ generation. Rather, ‘But with those who stand here with us today…and with those who are not with us here today,’ meaning that all future generations have been promised it—to pass through all the bludgeons of the covenant, and that they will not be harmed, through the unity and bonding that will be among them.”

We therefore see that the level of unity in Israel, the fate of the people, and the fate of the world have been linked from the very inception of the nation. That unbroken link is at the root of all our troubles, as we will see through the rest of this series.