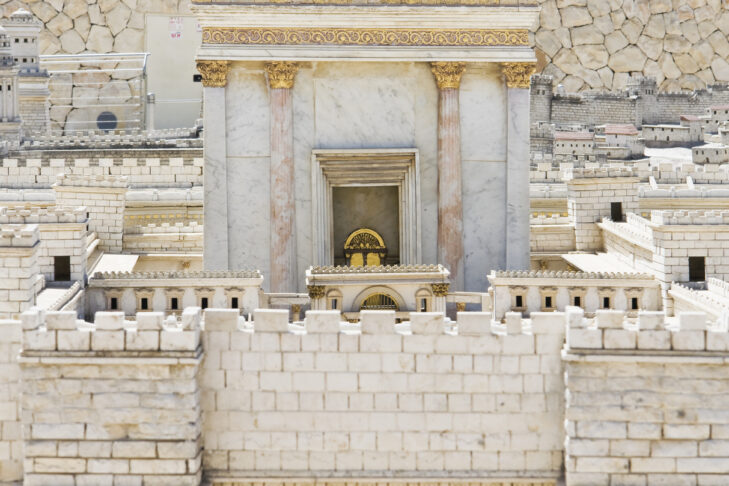 Model of the second temple in Jerusalem (Photo: dominiquelandau/iStock)

Following their liberation from slavery in Babylon after King Cyrus had sent them free with “silver and gold, with goods and cattle, together with a freewill offering for the house of God which is in Jerusalem” (Ezra 1:4), the expats, or more accurately, two of the 12 tribes of Israel, returned to the land of Israel and to Jerusalem and built the Second Temple. The history of our people is strewn with agony. But the period between the Cyrus Declaration, in 539 BCE, and the beginning of the Hasmonean revolt, in 166 BCE, was relatively a quiet one and marked by a great achievement: being a role model of unity for the nations, even if briefly.

It isn’t that there were no squabbles among the Jews at that time. Since we were called upon to rebuild the Temple, there was much to argue about. But one way or the other, the Temple was built and quiet was restored. In fact, some of those years might even be regarded as the people of Israel’s golden era.

In terms of material life, not much is known about the lives of the people of Israel in the land of Israel during the third and fourth centuries BCE. In his book “A History of the Jews,” renowned historian Paul Johnson writes about that peaceful time in our history, when there was nothing to report: “The years 400-200 BC are the lost centuries of Jewish history. There were no great events or calamities they chose to record. Perhaps they were happy,” he concludes.

However, on the social and spiritual levels, much was happening. Three times a year the Jews would march up to Jerusalem to celebrate the festivals of pilgrimage: Passover, Shavuot (Feast of Weeks), and Sukkot. During each pilgrimage, the sight was spectacular. The pilgrimages were intended primarily for gathering and uniting the hearts of the members of the nation. In his book “The Antiquities of the Jews,” Flavius Josephus writes that the pilgrims would make “acquaintance…maintained by conversing together and by seeing and talking with one another, and so renewing the recollections of this union.”

Once they entered Jerusalem, the pilgrims were greeted with open arms. The townsfolk let them into their homes and treated them as family, and there was always room for everyone.

The Mishnah relishes this rare camaraderie: “All the craftsmen in Jerusalem would stand before them and ask about their well-being: ‘Our brothers, men of so and so place, have you come in peace?’ and the flute would play before them until they arrived at Temple Mount.” Additionally, every material need of every person who came to Jerusalem was met in full. “One did not say to one’s friend, ‘I could not find an oven on which to roast offerings in Jerusalem’…or, ‘I could not find a bed to sleep in, in Jerusalem,’” writes the book Avot de Rabbi Natan.

Even better, the unity and warmth among the Hebrews projected outward and became a role model for the neighboring nations. The philosopher Philo of Alexandria portrayed the pilgrimage as a festival: “Thousands of people from thousands of cities—some by land and some by sea, from the east and from the west, from the north and from the south—would come each festival to the Temple as if to a common shelter, a safe haven protected from the storms of life. …With hearts filled with good hopes, they would take this vital vacation with sanctity and with glory to God. Also, they made friendships with people they had not met before, and in the merging of the hearts…they would find the ultimate proof of unity.”

Philo was not the only one who admired what he saw. Those festivals of bonding served as a way for Israel to be—for the first time since they were given that vocation—“a light unto nations.” The book Sifrey Devarim details how gentiles would “go up to Jerusalem and see Israel…and say, ‘It is becoming to cling only to this nation.’”

Some three centuries later, The Book of Zohar (Aharei Mot) described succinctly and clearly the process that Israel went through: “‘Behold, how good and how pleasant it is for brothers to also sit together.’ These are the friends as they sit together and are not separated from each other. At first, they seem like people at war, wishing to kill one another…then they return to being in brotherly love. …And you, the friends who are here, as you were in fondness and love before, henceforth you will also not part from one another…and by your merit, there will be peace in the world.” Indeed, being “a light unto nations” could not have been more evident than at that time.

In fact, the renown of the Jews at that time went so far that it initiated the proliferation of their law outside of Israel. By the mid-240s BCE, the rumor of Israel’s wisdom had reached far and wide. Ptolemy II, king of Egypt, had a passion for books. This led him to aspire to possess all the books in the world, especially those containing wisdom. According to Flavius, Ptolemy told Demetrius, his librarian, that he “had been informed that there were many books of laws among the Jews worthy of inquiring, and worthy of the king’s library.” Not only did Ptolemy not have these books, but even if he did, he would not be able to read them since they were “written in characters and in a dialect of their own [Hebrew], [which] will cause no small pains to get them translated into the Greek tongue,” which Ptolemy spoke.

But Ptolemy did not give up. He wrote to the High Priest in Jerusalem, Eleazar, and asked that he would send him men who could translate the Jewish books to Greek. Seventy men were sent down to Egypt following Ptolemy’s request. But the king did not send them off to work right away. First, he wanted to learn their wisdom and absorb whatever knowledge he could from them. Therefore, “he asked every one of them a philosophical question,” which were “rather political questions and answers, tending to the good…government of mankind,” writes Flavius. For 12 straight days, the Hebrew sages sat before the king of Egypt and taught him governance according to their laws. Along with Ptolemy sat his philosopher, Menedemus, who was in awe at how “such a force of beauty was discovered in these men’s words.” This, indeed, was Israel’s heyday.

Finally, “When they had explained all the problems that had been proposed by the king about every point, he was well-pleased with their answers.” Ptolemy said that, “He had gained very great advantages by their coming, for that he had received this profit from them, that he had learned how he ought to rule his subjects.”

Once Ptolemy was satisfied with the answers they had given him, he sent them off to an isolated location where they had peace and quiet and could focus on the translation. When they completed their task, writes Flavius, they handed over to the king the complete translation of the Pentateuch. Ptolemy was “delighted with hearing the Laws read to him, and was astonished at the deep meaning and wisdom of the legislator.”

Historian Paul Johnson, whom we mentioned earlier, wrote about the Jews in antiquity that, “At a very early stage in their collective existence they believed they had detected a divine scheme for the human race, of which their own society was to be a pilot.” Perhaps during the third century BCE, our forefathers succeeded in that task. However, as we know from history, our brotherhood did not last, and less than a century after those wondrous events took place, Israel were engulfed in a bloody civil war. This will be the topic of the next essay.