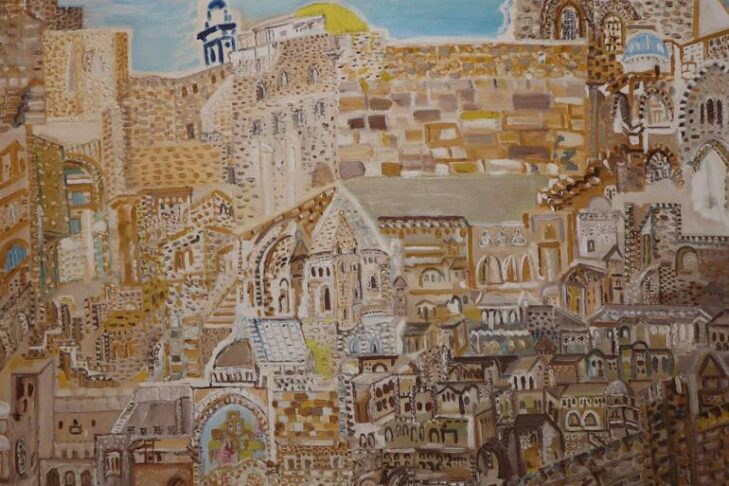 In the previous article, we described what might be regarded as the golden era of the Jews, the 4th and 3rd centuries BCE, when there were relative unity and calm, and three times a year, people from the nations of the world would come to Jerusalem to be inspired by the unity and brotherhood during the pilgrimages and said, “It is becoming to cling only to this nation.” We also wrote that that was the time when Ptolemy II, king of Egypt, wanted to learn the Jewish wisdom, so he invited 70 sages from Jerusalem to teach him the Jewish law and translate the Five Books of Moses into Greek so he could understand them. Ptolemy was so happy with what he had learned that he said to the sages that now he had learned how he ought to rule his subjects.

King Ptolemy wanted to keep learning from the Jews and asked the permission of the High Priest in Jerusalem, Eleazar, to request that one or two of them might come whenever he had questions about ruling or about Jewish wisdom. Regrettably, that wish never materialized, and not because of Ptolemy, but rather because the Jews themselves had changed.

The uniqueness of the Jewish system lies not in the fact that Jews are superhuman and can overcome their egos. There is no such thing. Rather, the uniqueness of genuine, authentic Judaism is in recognizing that human nature is egoistic yet rising above it, as King Solomon said, “Hate stirs strife, and love will cover all crimes” (Prov. 10:12).

At the time when the Jews were in their prime, their ego rose to such levels that they could not overcome it. As a result, many of them began to shun the way of unity, the way of their fathers, and began to lean toward the cultures of their neighboring countries, namely Hellenism. The Hellenistic culture, with its gymnasiums, amphitheaters, grand statues and impressive architecture, seemed more appealing than Judaism, which demanded that the individual would strain to love others. Contrary to loving others, the Greeks extolled the self, the individual, and offered gods that were much more humanlike than godlike, which appealed to people’s growing self-absorption.

The result of this spiritual decline was that instead of the nations learning about brotherhood from the Jews, the Jews invited the Greeks, instilled the Hellenistic culture in the land of Israel, and the nation became increasingly divided.

In 175 BCE, Seleucus IV Philopator, ruler of the Hellenistic Seleucid Empire—who was the sovereign in the land of Israel, and gave the Jews complete freedom of worship—passed away. His successor was Antiochus IV Epiphanes. Initially, Epiphanes had no intention to change the status quo in Judea, and had no wish to interfere with the Jews’ freedom of worship, but some Jews had other plans, and from here matters quickly went downhill.

By the time Epiphanes came to power, the cities of Shechem, Marissa, Philadelphia (Amman), and Gamal were already Hellenized. “A ring of such cities, swarming with Greeks and semi-Greeks, surrounded Jewish Samaria and Judah, which were seen as mountainous, rural, and backward…antique survivors, anachronisms, soon to be swept away by the irresistible modern tide of Hellenic ideas and institutions,” writes Paul Johnson in “A History of the Jews.”

Seeing what was happening around them, the Jews established what Johnson called a “Jewish reform party who wanted to force the pace of Hellenization.” Just as the contemporary Reform Movement that started in Germany strove to strip Judaism of Jewish customs, or at least mitigate them, and place the focus on its ethics, their forefathers strove to “reduce it to its ethical core,” he writes.

To accelerate the Hellenization of Judea, the leader of the archetypical Reform Movement, Jason [Hebrew: Yason], whose goals and modus operandi were not unlike today’s Reform Judaism, joined hands with King Antiochus Epiphanes, who was “anxious to speed up the Hellenization of his dominions…because he thought it would raise tax revenues, as he was chronically short of money for his wars,” according to Johnson. Jason paid Epiphanes a hefty sum of money, and in return, the latter ousted the incumbent High Priest in Jerusalem, Onias III, and handed the position over to Jason.

Jason did not waste any time. He turned Jerusalem into a polis, renamed it Antiochia, and constructed a gymnasium at the foot of Temple Mount. Just as the Reform Movement did in Germany as soon as they were given emancipation in the early 1870s, the reformers in antiquity aspired to adapt Judaism to modernity, eventually abandoning it altogether. They abandoned ancient Jewish customs that related to the Temple and stopped circumcising male babies. In the words of Flavius Josephus, “they left off all the customs that belonged to their own country and imitated the practices of the other nations.”

Ironically, in 170 BCE, Menelaus did to Jason just what he had done to Onias III before him: He paid Antiochus Epiphanes a hefty sum of money, who, in turn, anointed him the High Priest in Jerusalem.

But far worse than the abandonment of their customs, when the Jews turned Hellenists, they also abandoned their unity. Even among the Hellenists, fights erupted between supporters of Jason and supporters of Menelaus. The rest of the people, who preferred to maintain the Jewish spirit that had earned them such respect from Ptolemy, wanted neither leader and were growing increasingly rebellious.

Interestingly, Epiphanes himself was not interested in obliterating Judaism. In fact, it was most unusual for a Greek government to trample other faiths. According to Johnson, “The evidence suggests that the initiative came from the extreme Jewish reformers, led by Menelaus.”

Yet, in 167 BCE, when the Hellenists tried to place an idol in the Temple at Modi’in, where Mattathias the Hasmonean was the priest, the tide turned against them. Mattathias the Hasmonean was well known, well respected, and very adamant about his piousness. The Hellenists wanted to “compel the Jews to do what they were commanded and to enjoin those that were there to offer sacrifice [to idols]. They desired that Mattathias, a person of the greatest character…would begin the sacrifice because [so they believed] his fellow citizens would follow his example,” writes Josephus. “Mattathias said he would not do it, and that if all the other nations would obey the commands of Antiochus…neither he nor his sons would leave the religious worship of their country.” When another Jew stepped in to sacrifice instead of Mattathias, the enraged priest “ran upon [the Jew] with his sons, who had swords with them, and slew both the man who sacrificed and Apelles, the king’s general, who compelled them to sacrifice, with a few of his soldiers.”

Before long, thousands of Jews, frustrated with the forced conversion into Hellenism dealt upon them by the High Priest himself, joined Mattathias and headed for the mountains of the Judah Desert. Mattathias appointed his third son, Judah Maccabee, as commander of the newly hatched militia, and from the desert, they conducted the brilliant guerrilla campaign that we now know as the Hasmonean Revolt, or the Maccabean Revolt.

The Maccabean Revolt did not target the Seleucid army or any of the neighboring armies. It aimed at the Hellenized Jews and strove to intimidate them and force them back to Judaism. But since the Hellenists had the support of the Seleucid government, they turned to Antiochus and asked for his military assistance.

One year into the revolt, Mattathias passed away. Before his death, he summoned his sons and instructed how they should continue the struggle. But most of all, he commanded them to maintain their unity according to the ancient Jewish law: “I exhort you, especially, to agree one with another, and in what excellency any one of you exceeds another, to yield to him so far, and by that means to reap the advantage of every one’s own virtues,” writes Josephus.

It is this spirit of unity and contribution of everyone’s strengths to the common good that yielded the Maccabees their illustrious victory over the far greater, better equipped, and far better trained armies of the Seleucid Empire. Three years into the insurgency, Judah was strong enough to march on Jerusalem and retake it from the Seleucids. Then, finally, in 164 BCE, the High Priest Menelaus was forced to seek refuge.

Yet, retaking Jerusalem and resuming the worship in the Temple did not end the war. Not only did the Jews have to fight the Seleucids outside the walls, they also had trouble from within. “Throughout the period of persecution and revolt,” writes historian Lawrence H. Schiffman, “the Hellenistic pagans in the Land of Israel had sided with the Seleucids and had participated in the persecutions. It was therefore natural that Judah now turned on these enemies as well as on the Hellenizing Jews who had brought on the horrible persecutions. The Hellenizers, many of them of aristocratic origins, had fought on the side of the Seleucids against Judah.

After Epiphanes died in 164 BCE, his son Antiochus V Eupator came to power. After putting a long siege on Jerusalem, and having almost starved it to death, the Seleucids suddenly found themselves under threat from Persia. Having no other choice, the king offered the besieged Jerusalemites peace, promising them freedom of worship and self-governance. The Maccabees accepted the offer willingly, and the Seleucids quickly retreated to deal with the advancing Persians. They did, however, take with them the now ousted High Priest Menelaus, as “this man was the origin of all the mischief the Jews had done them, by persuading his father to compel the Jews to leave the religion of their fathers,” concludes Josephus. Subsequently, Antiochus V Eupator restored the agreement of religious freedom that his great-grandfather, Antiochus III the Great, had had with the Jews, and put the final seal on the Hasmonean Revolt when he executed Menelaus.