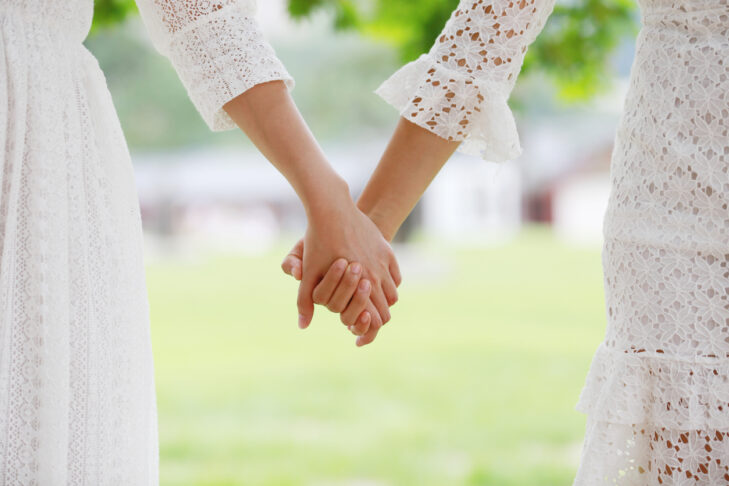 With our very quick, socially distanced outdoor wedding of two (plus the amazing friend who is marrying us) less than a month away, I have been thinking more and more about my partner Ollie’s conversion, and the process by which they joined the Jewish community.

I wasn’t one of those kids who planned their wedding from a young age, the concept of adhering myself to one person until death rather nebulous at best, but the one defining characteristic of the faceless, genderless person populating my sparse fantasies was their Judaism. Though I wasn’t particularly religious as a kid, Judaism was ever-present in my life, both as a way of viewing the world and as an othering force. As I grew older, my relationship with religion morphed into something deeper, more appreciative, and I found myself looking back on my upbringing through a distinctly Jewish lens.

In the community in which I grew up, I didn’t know many converts. Christian friends seemed eager to take me to youth group, to services, to church cookouts, and it didn’t take long for me to notice the distinct difference between them and those in my community. Jewish people aren’t terribly interested in convincing others to join the religion. A Jewish stranger has never knocked on my door with a pamphlet and an unsolicited invitation. If one wants to join the Jewish community, they’d better be prepared to do a lot of work themselves.

In truth, I love this approach. Conversion to Judaism takes time and study and profound devotion, so when my best friend at the time (now my almost wife) expressed an interest in converting, I was extremely excited. Converting is an exercise in pursuit, in celebration, in reading every book one can get their hands on. It involves lots of discussion and a full, complex understanding of not only the religion as it is now, but the millennia of history that has led us to this point.

In short, it is no small feat, but the rewards are so vast and beautiful and dependent on that work that they cannot be attained without it. Because Judaism is, at its core, love and study. There is little passivity to the religion, and in order to become a Jew, one has to take an active role. The moment I met Ollie, before we became friends and fell in love, I felt that devotion within them. It felt like déjà vu, like I recognized them from across the gulf of a hundred years.

It’s no secret that I sobbed when they immersed in the mikvah for the first time to be welcomed home. Even now, the memory chokes me up because of how right it all felt. In Deuteronomy 29:13, on the last day of Moses’ life, God spoke to the Jewish people, saying: “Not with you alone do I seal this covenant and this oath. I am making it both with those here today before the Lord our God, and also with those not here today.” The Talmud explains that this line refers to future converts, and that a Jewish spark already resides within each convert.

When the love of my life stepped out into my arms, I felt something that had always been off-center within me click into place, not only because my partner had joined the Jewish people, but also because, though I had been Jewish my whole life, I felt as if my own understanding had solidified as well.