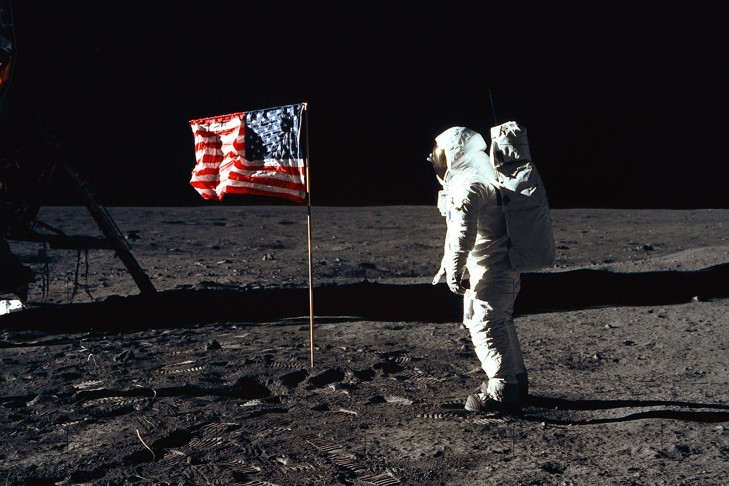 It’s time for a theme for Shabbat dinner; I haven’t planned one in a while. When my kids were younger, we had a Harry Potter Shabbat, featuring kosher shepherd’s pie, which was the closest to British cuisine that I could come up with, along with Jelly Belly Bertie Bott’s Every Flavor Beans. There was a Junk Food Shabbat, during which we indulged in, among other things, the sugary cereals that had never entered my kitchen before. When Dec. 31, 1999, fell on a Friday night, we had friends over and shared a special reading provided by our temple to celebrate the new millennium.

The kids are grown up and on their own, but I decided that a themed Shabbat dinner is in order as we anticipate the 50th anniversary of the moon landing. The actual anniversary is Saturday, July 20. I invited friends who share our excitement about all things related to space travel (OK, we’re nerds!).

The moon landing wasn’t a thrill just for space fanatics. All over the world people watched in wonder as Apollo 11 touched down on the moon and, six hours later, Neil Armstrong placed his foot on the lunar surface. Watching this moment on the ubiquitous TV specials this past month still gives me a thrill. This was a Shehecheyanu moment for Planet Earth. In fact, the Shehecheyanu prayer will be part of our Shabbat liturgy this Friday night. The prayer is traditionally recited when celebrating special occasions or new and unusual experiences.

The moon landing was a profound, even spiritual, experience for, according to one estimate, the 600 million people who followed the event on radio and TV. In a recent issue of Jewish Rhode Island, Rabbi Jeffrey Goldwasser of Temple Sinai in Cranston noted: “In the image of the Earth rising over the lunar horizon, we came to see that everything we know, everything we have experienced, everywhere we have been as a species has been limited to one rather small rock in the vastness of space. It has awakened our awareness that the universe is mysterious, awe-inspiring and magnificent beyond our ability to understand, and yet we are a part of it.” Goldwasser quoted the Jewish mystic Moses ben Jacob Cordovero (1522-1570), who, explained the rabbi, “anticipated this in the 16th century when he wrote, ‘You wonder, astonished: Who am I? I am a mustard seed in the middle of the sphere of the moon, which itself is a mustard seed within the next sphere…. Your awe is invigorated; the love in your soul expands.’”

I have had so much fun preparing for this dinner. Dessert will feature Milky Way bars, Orbit Gum, a Mars bar, Sour Satellite Wafers, Astronaut Freeze-Dried Strawberries and chocolate planet truffles (each of which is glazed with the appropriate colors). Also, Star Wars popsicles! There will be door prizes, including NASA socks and a refrigerator magnet with the “I want to believe” theme and UFO “photo” from “The X-Files.”

My dining room wall is decorated with space cartoons, photos from our trip to the Kennedy Space Center in Florida in 2017 (during which I was over the moon, so to speak) and copies of photos taken on the moon. There are also photos and vital statistics on the missions of the 13 Jewish astronauts and one Jewish cosmonaut. I had the good fortune to meet one of them, Jeffrey Hoffman, at a Hebrew College event, which was also a peak experience for me.

So, yes, there’s a fun, even silly, aspect to our Moon Landing Shabbat, but it can’t be denied that NASA’s triumph was a Shehecheyanu experience for humanity. “The moon landing certainly has spiritual lessons to teach us, if we will just open our minds and hearts to hear them,” said Rabbi Goldwasser. “We can know with greater clarity than ever that all of humanity shares this bit of rock orbiting the sun. We can do so together, cooperatively, for our mutual benefit, or we can do so selfishly and antagonistically for our mutual destruction. Our survival as a species and as a planet depends on our ability to see our tiny world as our one shared home, and to see all of humanity as one family.”