Close
Don’t miss another chance for fun!
Get the best Jewish events for children, teens and families delivered to your inbox every Wednesday with JewishBoston Plus Kids.
By signing up, you agree to our Terms of Use and Privacy Policy.
Spirituality
View all 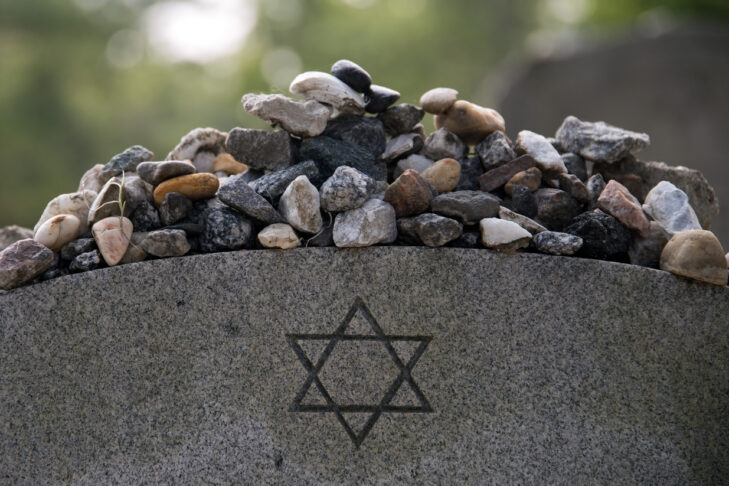 My grandparents and uncle are buried at Temple Beth El in Chelmsford. I remember going exactly once, in 1996, when my grandmother died. My grandfather died when my father was just 13, and his brother—my uncle—died before my dad even went to kindergarten.

It’s complicated: This isn’t a family where people died in their predictable order and in which you can rationalize death as a natural part of life. My dad’s dad was in his mid-50s; his brother was just a teenager. He died while away at summer camp, and sometimes I’ll still pull up the grainy digital headlines on my NewspaperArchive subscription. The wording is old-fashioned and gory: He “met death” on his second day at camp, after diving from a raft. Counselors “worked over” him for a long time, to no avail.

I don’t think of my father’s nuclear family all that much, but lately my uncle is top of mind: My 11-year-old goes to sleep-away camp for the first time tomorrow. He’ll be gone for a month. He’s not much younger than my uncle Marshall was when he went away and never came home. (Is he even my uncle? Genetically, yes, though it feels odd to type.)

Now, I know this sounds incredibly morbid, and really: I’m fine! I’m incredibly excited for him to go, even though I’ll miss him. But I also can’t help but think of my grandmother, who sent her son off to camp, never to see him again. These days, of course, things are different. I can routinely check my Campanion app to look at photo streams, updated constantly, for one thing. There are online message boards; there’s texting with friends; there’s a world of constant connection and support when you begin to freak out with nerves—resources that weren’t available to an ordinary camp parent in the 1950s, let alone a grieving one.

But other things haven’t changed over the years: I’m still entrusting my son to strangers and hoping for the best.

I know what happened to my uncle is incredibly rare. It also makes me think that I should join my dad one of these days at Temple Beth El, with my son. Why haven’t I gone? Well, in fairness, it was never a suggested family field trip. I can’t imagine it’s my dad’s favorite place to be. But since my mother died, he’s been going more frequently. My brother has joined him; I haven’t.

Maybe part of me feels superstitious. I have a tween now. I worry about all the normal things (or not so normal, really): school shootings are top of the list. But I also feel a nagging awareness of what it must be like to lose a teenager when they’re out of your sight, because something bad and rare really did happen in our family. I have sympathy for my grandmother that I wasn’t old or sophisticated enough to grasp as a kid. The death of a child is unfair. In this situation, is God a true (or righteous) judge?

I’ve been lucky so far; my own family has been healthy. My uncle’s death has felt abstract, more myth than reality. But it isn’t, and it wasn’t. And so I’m going to visit the gravesite with my kids—but, just the same, I’m going to wait until everyone is safely back home.

Do you ever feel superstitious? Do you go for cemetery visits with your kids? I’m curious! If you have ideas, let me know.