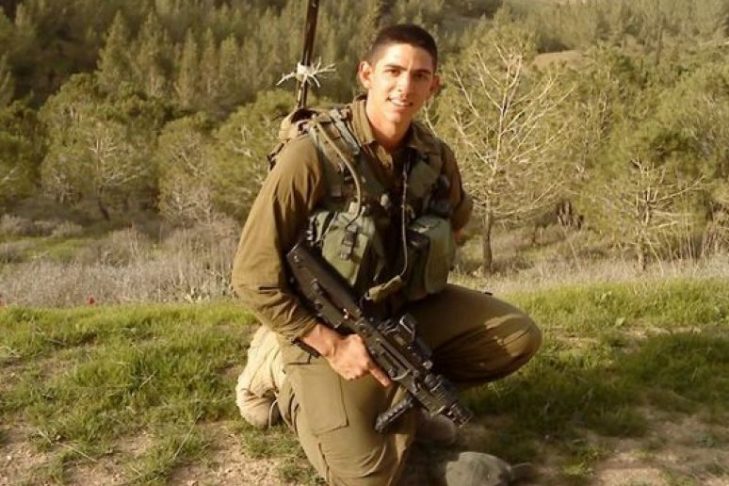 “One-Armed and Dangerous: An American’s Journey in the IDF” is the story of Izzy Ezagui, a decorated squad commander in the Israel Defense Forces (IDF) who is the only soldier in the world to lose an arm in combat and return to the battlefield. Ezagui spoke at the third annual Jewish National Fund (JNF) Breakfast for Israel in Metrowest held at Temple Israel of Natick on Nov. 11.

Ezagui, who grew up in Miami, moved to Israel with his family when he was 18 and joined the IDF at the age of 19. In 2008, after enduring months of mortar attacks on Israeli cities from Gaza, Israel launched the 22-day Operation Cast Lead to end the indiscriminate rocket fire and the smuggling of weapons into Gaza. Ezagui was deployed to the front lines, and on Jan. 8, 2009, lost his left arm above the elbow when a mortar hit the tent he and his comrades were sitting in, preparing to go on patrol to recover the body of a fallen comrade. He was, by the way, left-handed. To spare his mother any worry, Ezagui had told her he was serving far away from any danger and was assigned to washing dishes. Soon enough, his family learned that this had not been the case.

“I had to relearn to do everything with one hand,” said Ezagui. His recovery and rehabilitation took months, as he weaned himself off powerful painkillers, got back in shape and, most surprising, returned to active duty. He continues to serve in an elite unit in the reserves.

Ezagui explained that it was while he was still hospitalized after his injury that he decided he wanted to continue to serve in a combat role. He took his case to the general of the Southern Command, who encouraged him. After grueling training, a few setbacks and skillful improvisation in making up for the lack of one hand, he was back. He eventually became leader of a squad of 13. What was his motivation? “It’s all about having a ‘why,’ a purpose,” he said. “By going back I erased what happened. We all have a battle scar. We need to find a ‘why’ that gets us through to the other side.”

Ezagui shared stories from his service before and after his injury, including his tendency to push the envelope. In the middle of Chanukah during one reserve training stint, he took the straps off eight of his fellow soldiers’ M16s and placed the stocks into the ground in a neat row with the barrels facing the sky. He put a candle in each and lit four, as it was the fourth night. He had a friend take a photo, which went viral, as far away as Russia, the U.S. and Europe. It also came to the attention of the head safety officer of the IDF, to whose office Ezagui was summoned. “The rules are, if a soldier is tried within his unit for a crime, he can’t be retried by a higher military court,” stated the safety officer. “So consider this your trial. My finding is you’re an idiot. My sentence is don’t be an idiot again. A menorah made out of guns. What’s next?” Ezagui told his squad mates that he wasn’t arrested because, “You can’t handcuff me!” (He also specializes in jokes making fun of his injury.)

Upon completion of his service, Ezagui returned to the U.S. and dedicated himself to hasbara (Hebrew for “explaining”), an Israeli public diplomacy effort to promote Israel and counter attempts to delegitimize the Jewish state.

Ezagui has written a book, “Disarmed: Unconventional Lessons from the World’s Only One-Armed Special Forces Sharpshooter.” It is a compelling combination of tragedy, brutal honesty, humor and vulgarity. I recommend it.

Ezagui currently lives in Los Angeles where he acts, writes screenplays and blogs. He delivers inspirational talks in the U.S. and abroad. He is also a successful fundraiser, helping to raise millions of dollars for hospitals, rehabilitation programs and other charities, such as the Birthright Foundation. He has also worked with religious and non-Jewish groups, amputee organizations, schools, universities and corporations.

At the Nov. 11 program, JNF staff explained that the organization, which is best known for planting trees in Israel—which it still does, by the millions—has expanded its mission. JNF promotes community building, including the development of the Galilee and Negev as centers of agriculture, tourism and technology; develops alternative water sources, advancing Israeli agriculture and improving water quality; preserves national heritage sites; supports research and development of solar power and salt water irrigation; sponsors Israel advocacy and education programs for children and adults; and helps to provide state-of-the-art rehabilitative services, special education and medical care while working to ensure that recreational facilities, forests, parks, picnic areas, playgrounds and nature trails are inclusive for people of all abilities.