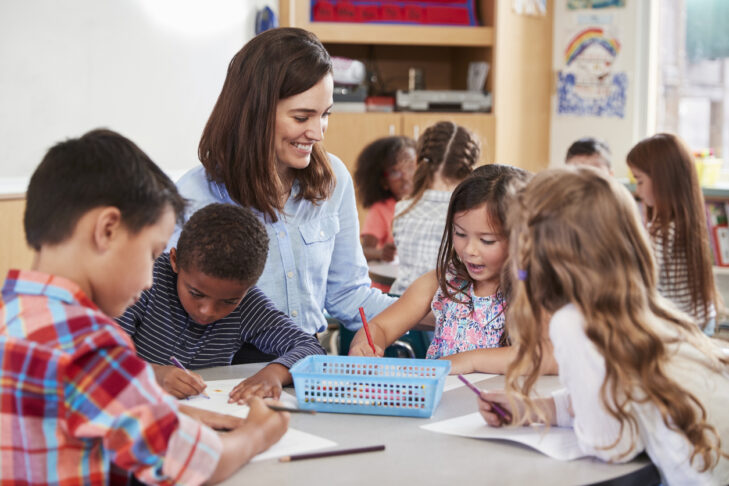 Is Jewish day school right for your family? Obviously, it’s a question only you can answer for yourself—but how about some help? I reached out to been-there, done-that day school parents for their advice. I asked them to talk to me like they would a friend who’s making the decision: pros, cons, things to consider either way.

Craig and Paula Ostroff have three kids at Maimonides. Jenny Gomeringer is a JCDS parent who works at Gann Academy. Here’s what they say to consider.

The Jewish population is small, and it’s nice to have a built-in support system.

“Someday, [our kids] are going to be adults, and they’re going to realize really how few Jews there are on this planet. Giving them a basis when they’re younger, letting them know that there’s a world full of Jews and they aren’t the only ones, is huge,” says Paula Ostroff. “Sometimes, it feels like you’re the only Sabbath observer or the only one who understands what it actually means to keep kosher. Just knowing they aren’t alone is an important life lesson.”

“I’ve said this before, and I stand by this one: My No. 1 goal for a school is to build up my kids’ Yiddishkeit. We also have college goals and extracurricular goals, but the No. 1 goal is not to become a Talmud school, but the school should not [squelch] their Yiddishkeit,” she says.

Moreover, Craig Ostroff says, it’s important to find a school that aligns with your family’s priorities—because they’ll be there for a big chunk of the day.

“You need to find a school that can align with what your family values are and the values you want imbued in your child. Because, when they leave school, after the eight hours or 10 hours a day—it’s a very long school day in a day school—it can’t be this great contrast. You know, the schools teaching them X, and they come home and it’s Y,” he says.

Gomeringer grew up “culturally” Jewish but wasn’t driven by religion when evaluating schools when her fifth grader was in kindergarten. Instead, she simply liked the vibe and social-emotional support offered at JCDS.

“JCDS felt like an instantaneous extension of our family,” she says. “It was the school that actually provided the social-emotional support and guidance and moral structure, or framework, if you will, that closely matched how we parented.”

How the school community behaves when nobody’s looking

Your child will likely have a shadow day, and of course parents will visit, too. But try to wander around to get a true sense of how kids and teachers interact.

When the Ostroffs’ high-school-aged son was deciding on schools, “He would on purpose get a little lost in the building to see how the students would act, and that’s how he knew that his school was going to be the right fit for him. It wasn’t necessarily the one that we thought was going to be top of the list when we started the process, but by the time we ended the process, that’s where we were. A lot of it has to do with the kids. The kids were nice and thoughtful, and they were looking out for the other kids in the school,” Paula Ostroff says.

Parents should also seek out other families to get firsthand, candid takes on pros and cons about each school, beyond what they learn from administrators and observe on campus. Word of mouth matters.

Affording day school might seem daunting. It’s all about priorities—and not being afraid to request support.

“It can be very difficult. Everybody has their own financial situation. But for us, it’s worth it. Our point of view is: You only have a limited amount of time to imbue Yiddishkeit and Jewish family values into a child because once they go to college, they’re going to be exposed to everything in the world, and they have to have a playbook to rely upon,” Craig Ostroff says.

However, this experience costs money. So ask about financial aid. It’s out there.

“For the Jewish community, education is a huge priority. We’ve been through so much as a people, and we are so committed to educating the next generation. Day schools in Boston have incredible financial aid programs, done with the goal of making those schools as accessible as possible,” Gomeringer says. (She notes that Gann Academy offers significant aid to families across incomes.)

Don’t be daunted by the religious component

“I think a lot of people get nervous right out of the gate that their kids are going to be given too much religion,” Gomeringer says. “What we’ve really found is that it’s actually the opposite. In our experience, we feel like it’s really given our kids a stronger moral compass and a framework through which to make decisions.”

Often, she says, people “self-select” out due to religious concerns (or financial ones).

You can still make friends with people in your hometown

Some families worry their kids will be detached from their hometown if they go to school elsewhere. You might need to make an effort, but it’s possible—and important.

“Self-selecting out of your community is not who we are as a people. One of our values is being involved in our community and making sure we’re giving back. So, if we go to school at a different place, we’re so committed to where we live locally,” Gomeringer says. Enroll your kids in sports; take classes; have neighbors over for a (COVID-safe) beer.

Not every school is a fit for every kid. Ask administrators about special education (if applicable), class size, how the school builds community, how the kids move through their day and about the balance of religious and secular education. Don’t be afraid to ask, and ask again, until you’re satisfied.

“Everybody who works at these schools truly has the kids’ best intentions and best interests at heart. They don’t mind if you want to talk one, two, three, four-plus times; their goal is really to make you feel comfortable and like you have data,” Gomeringer says.  Don’t feel shy about using those resources (and, again, about reaching out to alums and current families to get their candid takes).

And, if you do choose to go the day school route? There’s probably one that’s just right, especially around here.

“What’s beautiful about Boston is that we have enough day schools here that you can truly find the one that fits your family the best,” she says.