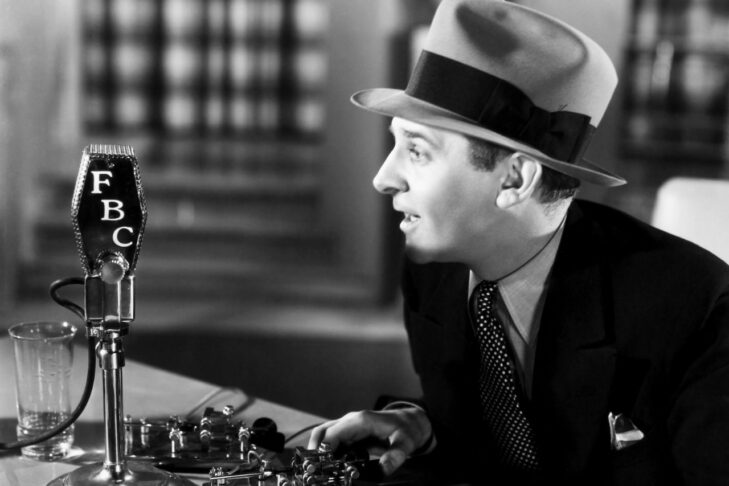 Where did the era of hyper-partisan news, clickbait journalism and punditry-as-entertainment begin? “Walter Winchell: The Power of Gossip,” an informative new PBS American Masters documentary premiering Oct. 20, traces the origins of our current media landscape to one particular volatile tabloid columnist and radio personality. You might not have heard of Walter Winchell, but from his heyday in the 1930s up through his dramatic fall from grace in the ‘50s, he commanded an audience of millions and could destroy careers with his words.

Boston-based filmmaker Ben Loeterman, director of the hour-long film, didn’t really know much about Winchell either before starting the project. Loeterman said his knowledge of Winchell beforehand came from journalism school: “I had always heard of this thing called the two Walters, Walter Lippmann and Walter Winchell, and I kind of knew they were the ‘good boy, bad boy’ pair.” So, what inspired him to make this film? “A few years ago, I was getting particularly frustrated and curious about media consumption,” he said. “I was really trying to scratch my head about the origin of [media hyper-partisanship]. Was it at Jon Stewart? Was it at Rush Limbaugh? Did Howard Stern have something to do with it? That started me on a bit of research that ended up being this film. I ended up landing at Walter Winchell as the origin story of what we all suffer from now.”

Interestingly, despite the way he shaped the current climate, Winchell himself was all over the place politically, and hard to pin down on any part of the spectrum. He was a fierce advocate for FDR’s New Deal, and as a Jewish man, he spoke out strongly against Hitler at a time when more “respectable” journalists were afraid to (though the homophobia peppered into his anti-Hitler diatribes has not aged well, especially in light of how the Nazis persecuted LGBTQ people). Once FDR died, however, he decided the next big political voice he’d hitch his wagon to was Joseph McCarthy and the Red Scare. As Loeterman put it, “One week he’s Jon Stewart, one week he’s Rush Limbaugh or Tucker Carlson.” The only real commonality between his disparate political positions was a sense of populism.

So, is Winchell’s rise and fall the story of a hero who lives long enough to see himself become the villain? Not really. Based on the information about his personal life, he comes off as more of an utterly terrible person who just happened to align with some positive causes while he was gaining popularity. For all the gossip he spread about celebrity infidelities, he was constantly cheating in his own life. He had his daughter institutionalized because he didn’t like who she was dating, and his son was sent to a military academy before ultimately dying by suicide. Loeterman’s contempt for Winchell is obvious; when asked what surprised him most while making this documentary, he answered, “The most surprising thing I learned was how much I didn’t like him.”

Making a film about an unlikable protagonist was a challenge for the director. His main solution to his difficulty empathizing with his subject was to try to capture his subject’s sense of style. Winchell’s columns could be fragmented, almost stream-of-consciousness blurs of different stories leading into one another, and the film operates in a similarly fast-paced style. Loeterman said these similarities were intentional: “It’s not your parents’ PBS!” The experiment is successful, especially given that time limitations would have prohibited a more in-depth look.

Another factor making this stand out from other documentaries is its celebrity cast. Stanley Tucci is the voice of Winchell, while Whoopi Goldberg is the narrator. Tucci already starred in the 1998 HBO film “Winchell,” for which he won his first Emmy, so he was naturally drawn to this material.

Goldberg’s interest in the subject matter stems from her family’s long-time love of Josephine Baker, one of the stars Winchell most reprehensibly attacked. Winchell claimed to support civil rights, but when Baker called out racism she experienced at the Stork Club, Winchell’s unofficial headquarters, he retaliated by falsely smearing her as a communist. For all the criticism he dished out, he couldn’t take it when criticism was directed at him.

Winchell’s celebrity dropped precipitously throughout the ‘50s and ‘60s before his death in 1972. His TV show was a flop, his much better-remembered rival Ed Sullivan denounced him, and his paper, The New York Daily Mirror, folded in 1963. However, as the film’s closing scenes illustrate, all of us are living in a world Winchell created, for better or worse.