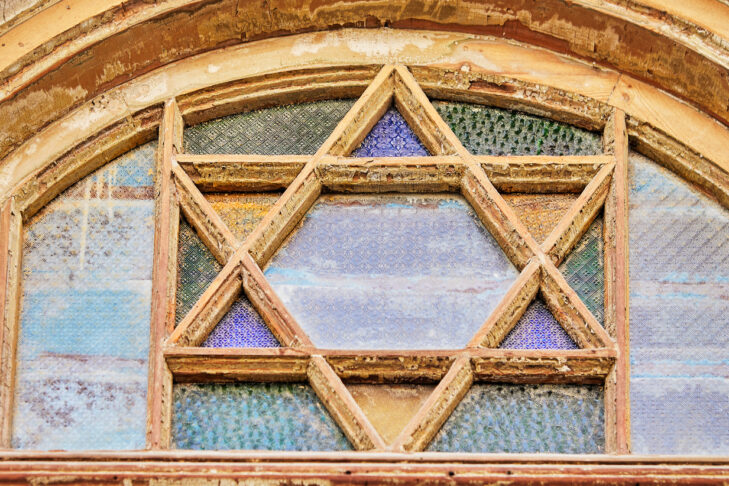 Rabbi Richard Perlman of Temple Ner Tamid of the North Shore in Peabody remembers the moment last month when the city police department alerted him that antisemitic flyers had been dropped off on lawns in West Peabody.

The alert came in the form of a text message from the Peabody police chief on Shabbat morning, which was also the morning of Shavuot. Yet Perlman picked up his phone while on the bimah.

“There must have been something wrong for him to send me a text like that,” Perlman said. “He told me they found some antisemitic pamphlets on people’s lawns.”

According to the Salem News, the flyers blamed Jews for “[every] single aspect of the [COVID-19] agenda.”

Perlman said that he did not believe anyone from his congregation received a flyer in Peabody, and that at least some of the individuals who did receive them were not Jewish.

Since then, antisemitic flyers have been found elsewhere in Massachusetts—including last week in two other North Shore communities, Ipswich and Hamilton.

Robert Trestan, executive director of the Anti-Defamation League New England, said that these flyers were distributed by white supremacist groups—the GDL, or Goyim Defense League, in the case of the Peabody flyers, and NSC-131, or the Nationalist Social Club-131, in the case of the Ipswich and Hamilton flyers.

A reported photo of one of the flyers that had been dropped off in the Hamilton-Wenham area was shared with JewishBoston. The flyer claims to be from NSC-131, a self-identified “pro-white, street-oriented fraternity.” The ADL identifies the group as a neo-Nazi organization.

“Different flyers are circulating,” Trestan said, adding, “antisemitism and racism and white supremacy—all the flyers have those three things in common, regardless of the group and the town.”

“People are offended, and they’re upset,” he said, recommending that individuals who receive such flyers report them to their local law enforcement.

“To me, it’s a form of terrorism,” Perlman said. “It’s antisemitic and also a form of terrorism. There’s free speech, but what’s the advantage of putting something in people’s yards that’s hate speech—the world’s problems all being blamed on the Jews?”

Perlman added that he and the local police “talked a little bit about it. There’s not a lot they can do. They did speak to the state police and communicated with the ADL. They did everything they were supposed to do.”

Over the past week, other flyers have been found in 13 cities and towns across all of the New England states, including the Cape Cod community of Chatham, as well as Weymouth on the South Shore.

Last week’s flyers were released in the wake of a march in Boston by another alleged white supremacist organization—the Patriot Front. A Black man was reportedly physically attacked by members of the group, which has prompted investigations by Boston Mayor Michelle Wu and U.S. Attorney Rachael Rollins.

“We know that some of the people involved with NSC-131 were formerly in the Patriot Front,” Trestan said. “There is certainly some overlap among these groups. We know they were all in the Boston area over the past week.”

“We saw on July Fourth that a group of white supremacists marched through Boston,” said Cantor Steven Weiss of Congregation Sha’aray Shalom in Hingham, a community that borders Weymouth. “We just have to keep calling it out and reacting to it as it happens.”

Weiss learned about the flyers in Weymouth from a congregant who sent him a photo. Boston 25 News reported that these flyers were also from the Nationalist Social Club.

“It looked like it was neo-Nazi propaganda that was placed around people’s doorways or mailboxes,” Weiss said.

Rabbis on the North Shore discussed the concern among their communities over the flyers.

“Obviously, everyone’s bothered and disturbed,” said Rabbi Nechemia Schusterman of Chabad of Peabody. “Every time this stuff comes up, it’s like a fresh tearing off of the scab of hate and antisemitism.”

Schusterman urged Jews not to be intimidated.

“Overall, we live in America, a country of kindness [and] benevolence,” he said. “It gives us [the right to] practice freely.” And, he said, “We cannot stop our practice and our observance; we can’t dial them back out of fear.”

“Our response has to be, ‘You think you’ll make us cower in fear, do less Jewishness, less overt Jewishness? We’ll double the amount,’” he explained. “Last year, we had one public menorah lighting. This year, we’ll have two.”

Alex Matthews, leader of Congregation Ahavas Achim in Newburyport, said that his community has not reported any flyers, but last summer, the synagogue received antisemitic and anti-Zionist voicemail messages on its answering machine.

In separate interviews, Matthews and Perlman each voiced concern about another development, the Mapping Project, a website that lists organizations and networks across Massachusetts that it accuses of involvement in the colonization of Palestine and other issues, from U.S. imperialism to policing to displacement, and calling for their dismantling.

Matthews described feeling that we’re “in a moment right now where people are feeling more emboldened to speak hateful and antisemitic ideas and views. They’re also doing it kind of anonymously.” He added, “It’s almost the worst of both worlds.”

“It’s one thing after another,” Perlman said.