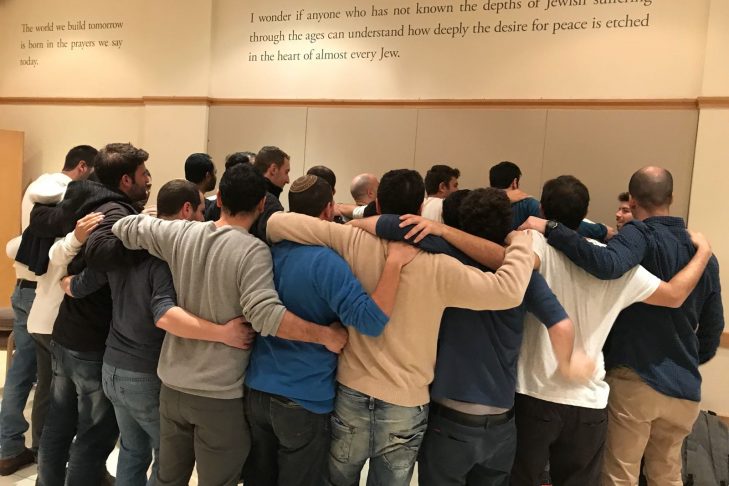 Over the course of the past 10 years, I’ve had the pleasure of engaging with dozens of young Israelis serving in the IDF. For many years, as the director of the Boston-Haifa Connection at CJP, we organized a powerful delegation of young IDF officers known as the “Hatikvah Mission,” that presented the human face of the Israeli army to the broader community through a series of meaningful dialogues and interactions.

One thing that always struck me was the extent to which the majority of the Jewish community viewed their IDF service as extraordinary, in contrast to the Israelis’ self-perception of being unremarkable. Nothing in Israel is regarded as more “ordinary” than mandatory IDF service. So, while most audiences in Boston regarded our visitors as heroes, the officers uniformly were surprised and of course pleased by this reception. Israeli soldiers defending the Jewish homeland cannot possibly see themselves as diaspora Jews see them. They have no understanding that we regard them as “our” soldiers.

There are, of course, several initiatives to support IDF soldiers, including the Friends of the IDF and Brothers for Life, but I’d like to describe a unique project I learned about recently called “Peace of Mind (POM).” POM’s goal is to provide veteran IDF combat soldiers with the opportunity to explore their inner feelings about their tour of duty, its impact on their current lives and to provide the tools to heal from the inevitable horrors of warfare.

It’s important to remember that not all IDF soldiers choose a combat role. There are surely many reasons for such a choice, but one is to have a truly meaningful role in protecting Israel from ongoing regional hostility. While every role in the IDF is important, becoming a combat soldier clearly demonstrates a high level of motivation to risk one’s life to defend the home front. Because even combat service is considered “ordinary” in Israel, sadly there is very little attention paid to its after effects. PTSD more often than not goes undetected and untreated. Impacts that do not necessarily rise to the level of PTSD, but nonetheless can interfere with an individual’s personal and family life.

This is the problem that POM seeks to address: treating former combat soldiers who don’t even know they need the support. The program provides former soldiers the opportunity to undergo a nine-month period of group therapeutic sessions as a unit in an evidence-based program led by professionals with extensive experience treating combat veterans. A unique aspect of the program is that the work is done not with individuals, but with combat teams that know and trust each other. This removes the stigma from the therapy and allows veterans who otherwise would not be open to the idea to join because the entire group is participating. Most of the sessions happen throughout the year in Israel; however, for one week, the entire unit travels to a diaspora community and the sessions are conducted outside of Israel. This allows the veterans while abroad to disconnect from the pressures of daily life in Israel and to focus on themselves and the therapeutic process, which includes about 40-45 hours of group therapy.

The Israeli veterans are hosted by one or two synagogue communities and are treated to home hospitality. As such, they receive the unanticipated hugs of the Jewish diaspora. Oftentimes the first question that a POM veteran asks his host family is, “Thank you, but why are you opening your home to us?” And that’s when the magic happens. In an environment of encouragement, appreciation and love, lifelong bonds are made with the local Jewish community as a mutual and intensive learning process occurs. The challenges of maintaining Jewish identity outside of the Jewish state are understood for the first time, in addition to the centrality of Israel in that ongoing struggle.

This past year, Temple Israel and Young Israel Sharon together supported POM in their community and hosted a former combat unit. They were so thrilled with its impact on the local community that they have committed to hosting a POM IDF veterans’ group annually. I had the good fortune this year of befriending an Israeli combat veteran who is currently enrolled in the MBA program at the MIT Sloan School who just returned from participating in a POM experience in London. Married with a newborn baby girl, here’s what Maor Zeevi had to say about his recent experience:

“When my teammates and I first heard of the POM program, we were skeptical. A bunch of tough guys, ex-combat soldiers, most of us are married, some with children. Why do we need to reflect back on the past? We did what we needed to do to protect our county.

“We almost never stopped thinking about those men that didn’t return from the war, or the physically injured ones, not to mention the mentally injured. If we did, it was mostly by cynical private jokes among ourselves. When we started the program, it almost immediately pealed those layers of repression that shielded us all those years. In intimate conversations, each of us opened up like never before. We cried, laughed, shared our deepest feelings and, above all, we were there for each other. We realized how deeply rooted those feelings were within us and how they affect our day-to-day lives. Whether at work, with our partners, friends and family, the military and our shared experiences shaped who we are and how we react to most of our life’s endeavors.

“We also had a chance to get to know a wonderful community in London, who hosted us with such courtesy we never thought we deserved. It was a wonderful experience to realize how Jews in the diaspora think of us and care for us, and how important it is to preserve that connection to Israel.

“I truly hope this program will continue to grow and reach new communities to strengthen their connections to IDF veterans and Israel as a whole, while helping those ex-soldiers get the support they deserve.”

On Shabbat morning, March 2, Dr. Danny Brom, the psychologist and founding director of POM, will speak about the program along with Maor Zeevi at Congregation Kehillath Israel in Brookline at 10:30 a.m. Dr. Brom’s topic will be, “Lessons From Israel: Veteran Care, Community Preparedness and Resilience.” There will be an opportunity post-Kiddush at 12:30 to delve deeper into the impact of POM with both Maor and Danny. Members of the community will have an opportunity to learn about this worthwhile endeavor that offers such a meaningful opportunity to deepen the bonds of love and connection between Israel and the diaspora in such a personal way.

To learn more about Peace of Mind, visit metiv.org/peace-of-mind or contact Chaim Landau, director of development and partnerships, at chaim@metiv.org.