Julius Rosenwald was one of the most influential yet relatively unknown American philanthropists of the early 20th century. Historian Hasia Diner aims to bring Rosenwald out of obscurity with her new biography, “Julius Rosenwald: Repairing the World.” A recent entry in the Yale University Press Jewish Lives series, Diner’s slim biography of Rosenwald joins a library of over 30 volumes dedicated to notable Jewish figures from King Solomon to Steven Spielberg. In a recent interview with JewishBoston, Diner noted: “Rosenwald’s own philanthropic philosophy and practice almost confined him to obscurity. He refused to have anything named after him. He believed that if you put your name on something it deterred others from giving.”

Rosenwald, who was known as JR, was the son of an immigrant peddler who got his start in the “shmata,” or clothing business, in mid 19th-century Baltimore. The Rosenwalds eventually wound up in Springfield, Ill., where JR was born in 1862. The family lived across the street from Abraham Lincoln’s home. JR made his way to New York City when he was 17 to learn the garment business. During his time in New York, he befriended future financial powerhouses Henry Morgenthau Sr. and Henry Goldman of Goldman Sachs.

Rosenwald returned to the Midwest, where he founded his own clothing store in Chicago. A few years later, he had the opportunity to invest in a struggling catalog sales company called Sears, Roebuck and Company. By 1908, Rosenwald had taken over the company and became rich after Henry Goldman helped him underwrite Sears’ initial public offering. (It was one of the first IPOs in the country.) At that time, Diner said Rosenwald was deeply enmeshed in the Reform movement, attending Sinai Temple in Chicago led by Rabbi Emil G. Hirsch.

By the time of his death in 1932, Rosenwald had donated close to the modern-day equivalent of $2 billion of his personal wealth to various philanthropic causes. At the center of his philanthropy was the funding of African-American schools in the south that were informally known as the “Rosenwald Schools.” Over the course of two decades, more than 5,000 Rosenwald schools opened in states including Louisiana, Alabama and Mississippi. Diner writes that one “1930s estimate concluded that 89 percent of all buildings in which Mississippi’s black youngsters received schooling were Rosenwald schools.” 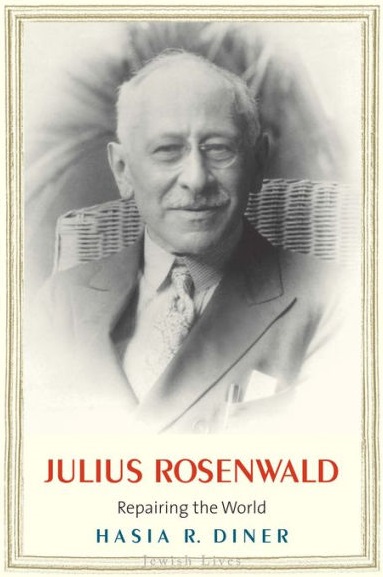 Rosenwald’s generosity in the African-American community was deeply influenced in part by Tuskegee Institute founder Booker T. Washington’s autobiography, “Up From Slavery.” He also saw funding African-American education as a way to improve the conditions under which African-Americans lived. Diner said Rosenwald’s activism was further connected to the essence of Reform Judaism’s social justice platform. “[Social justice] was the essence of Reform Judaism and the center of the Reform agenda,” observed Diner. “Jewish law may have been meaningful in the past, but the core of Judaism is improving the world, and Rosenwald was really influenced by that.”

Rosenwald’s charity also extended to the Jewish community—with a caveat. “He supported synagogues, Jewish learning, Jewish cultural programming and assistance for Jewish refugees,” said Diner. “However, he firmly believed that in day-to-day life, Jews had to live with other people. Prejudice ends when people are in contact with each other. He thought that living in a Jewish society was not in the best interest of the Jews.” His philosophy led him to disclaim early 20th-century Zionism as a utopian notion. Rosenwald was convinced that Zionism would lead Jews to become embroiled in Middle Eastern conflicts. “He thought that Jews separating themselves out was harmful to the Jewish people,” Diner said. “He saw that there were other people in Palestine, and therefore only gave money to certain kinds of cultural and educational projects.”

Aviva Kempner‘s documentary “Rosenwald” is a worthy companion to Diner’s book. Kempner presents a portrait of a modest, good man who was committed to bringing the Jewish concept of tikkun olam, or “repairing the world,” to life. Both Kempner and Diner, who is briefly interviewed in the documentary, present Rosenwald as a man who was very much a product of his time. Kempner’s documentary emphasizes how Booker T. Washington strongly influenced Rosenwald’s approach to funding African-American education. In keeping with the Tuskegee Institute’s motto—“We do everything we teach, and we teach everything we do”—Rosenwald provided one-third of the funding for his education project, demanded that the local white community fund another third and the final third come from the black community. The heart of the film presents the innovative fundraising the community did, which was bolstered by grassroots giving.

Rosenwald’s largesse to the African-American community also extended to the building of “black YMCAs” across the country. These particular YMCAs provided housing, educational and recreational opportunities to black men migrating north for work. Rosenwald further committed himself to the community when he established the Rosenwald Fund Fellowship, which awarded talented African-Americans grants. Recipients included W.E.B. Dubois, Ralph Bunche—the first black person to win a Nobel Prize—writers Ralph Ellison, Langston Hughes, James Baldwin and Maya Angelou. Another recipient, American poet laureate Rita Dove, says on camera that the fellowship was “the single most important funding agency for African-American culture in the 20th century.”

Both Diner and Kempner reveal the factors that went into Rosenwald’s philanthropic decisions, as well as the impetus behind his generosity to the African-American community. As the late Julian Bond, who appears in Kempner’s film, says, “He didn’t have to care about black people, but he did.”