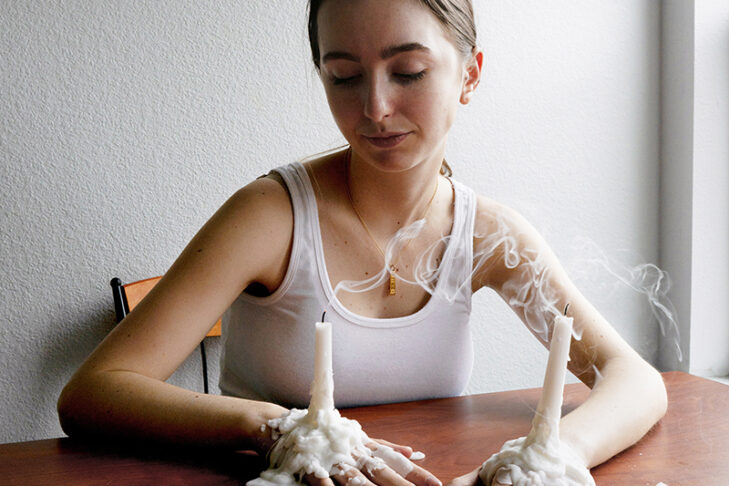 Somerville-based photographer Hannah Altman is intent on mining inspiration from Jewish narratives and ritual objects that conjure collective Jewish memory. Her new show, “With Rifts and Collapses,” an exhibition of three distinct groupings of photographs, is on view at Gallery 263 in Cambridge through July 9, 2022.

Altman garners inspiration for the exhibition from the Yehuda Amichai poem “The Jews.” She has honed in on the stanza:

“Jews are not a historical people
And not even an archeological people, the Jews
Are a geological people with rifts
And collapses and strata and fiery lava.
Their history must be measured
On a different scale.” 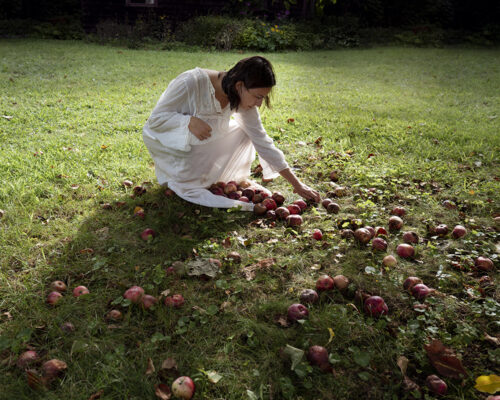 In a recent artist’s talk, Altman noted that her work translates Amichai’s words into “photographs that capture actions and objects as a link along the photographic chain of Jewish history.” Many of those actions and objects are rooted in Jewish ritual. Her visual interpretations of these rituals often “lean away from the ancestral connotations of the objects and through photographs that transform and extend the object past its physicality.”

Altman’s photographs are at once familiar and startling. In “Shabbat Candles,” a picture that is part of her “Kavana,” or prayerful intentionality grouping, she poses a friend at a table and captures the moment when her hands are dipped in wax and bond her to the candles. Altman noted that the mounds of wax represent time in a “very physical sense and feels very sacred because of the Shabbat candles.” In Altman’s first iterations of the photograph, the candles stayed lit, but the image felt static to her. When she blew them out, the smoke rising from the wicks captivated her, unfurling yet another Jewish narrative. “The smoke reminded me of leaving the sacred space of Shabbat while at the same time sitting in it,” she said. 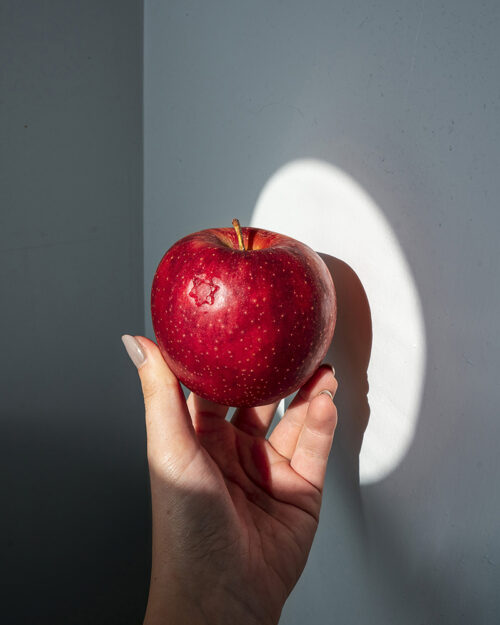 To me, the wisps of smoke were also reminiscent of the Holocaust. Perhaps it’s no coincidence that Altman and the friend who posed for the photograph met on a tour of Holocaust sites in Europe. When they returned, Altman turned her attention to Shabbat and transformed the smoke of tragedy into the holiness of Shabbat—something that Abraham Joshua Heschel famously described as a “sanctuary in time.”

“Pressed in Flesh,” another photograph in the exhibition from the “Kavana” series, is a stunning closeup of an apple that exudes both its redness and its folkloric associations with temptation. But Altman’s intention is to subvert negative connotations of both the apple and the Star of David impressed on it. Instead, the star is a positive symbol of Jewish identity. Altman writes that taken together, these photographs “explore notions of Jewish memory, narrative heirlooms, and image-making: the works position themselves in the past as memories, in the present as stories being told, and in the future as actions to interpret and repeat.” 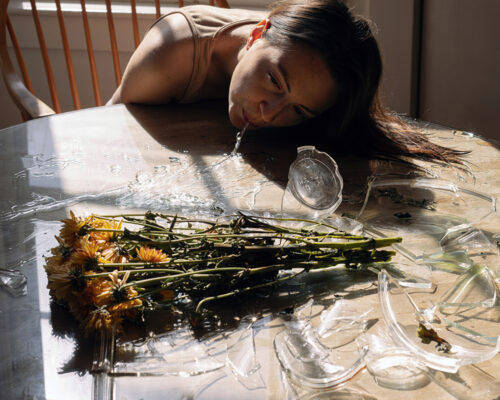 To emphasize the past, present and future of the apple as a “narrative heirloom,” Altman has intentionally hung “Pressed in Flesh” for the exhibition next to a photograph from the “With Rifts and Collapses” series called “Rotten Perfect Red.” The juxtaposition of “rotten” and “red” apples scattered in a field speaks to the past and future of Altman’s conception of the Jewish narrative. “In biblical lore, the apple represents temptation. But by hanging ‘Pressed in Flesh’ and ‘Rotten Perfect Red’ I’m also exploring ideas of perfection,” she said. “The apple is not yet bitten, yet it’s punctured by the Star of David. Both pictures also convey versions of red in different stages of time.”

Altman’s photographs from the various series are often in dialogue. For “On Stillness,” another photograph in the “With Rifts and Collapses” series, Altman has built a distinct world in which the early morning light scatters across decaying flowers and the shattered glass of their vase. The photograph also represents Altman’s move into more self-portraiture, which she said is often built on a scene. “For this photograph, I set up the image of the broken vase and the rotten flowers,” she described. “The light hits the table at exactly 7 in the morning, which gives me a 20-minute window to get the photograph. I smash the vase right before I take the photograph and I know these flowers are dying, so it’s perfect. I’m also thinking about my body in the picture. I have a timer, which I set off with my foot, and when it goes off, the only thing I’m actively thinking about in the space is my body and the light. Everything else is set up. I’m allowing the sun to take over and carve what’s in and out of the frame.” 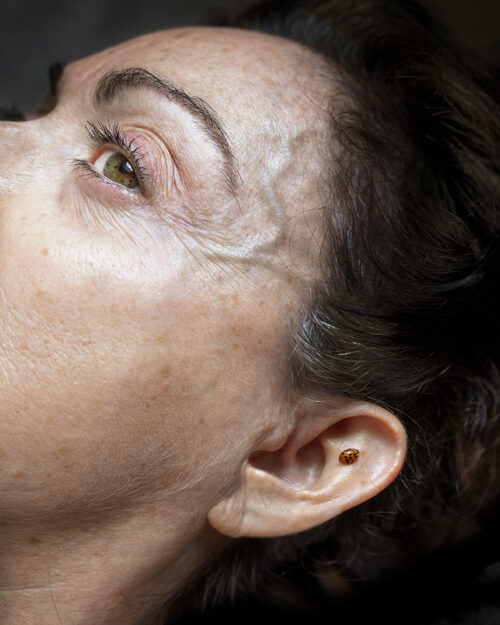 Altman’s mother is a frequent model in her photographs. In “Ladybug Dybbuk” from the series “A Permanent Home in the Mouth of the Sun,” Altman photographs a ladybug resting inside her mother’s ear. “Ladybugs are ghosts or possessive spirits for my mother,” she explained. “She is convinced that her mother, my grandmother, visits her from the other side in the form of a ladybug. My mother is not a spiritual woman, but she has this very specific take on ladybugs, which is very real to her.” The photograph also represents Altman’s intent “to explore the continuity of Jewish folklore and which themes we pass down in our narratives. I wanted to combine very physical objects with invisible representations of Jewish thought.”

Altman is committed to creating a visual vocabulary distinct from the spoken word. She does this in the context of exploring what constitutes a Jewish photograph. “The works in this show are all unified in that they prop up themes of Judaica, which might be object-based or in a narrative. However, together these photographs begin to form a world outside of language, and Judaism is the world they inhabit and the outlook through which we view them.”