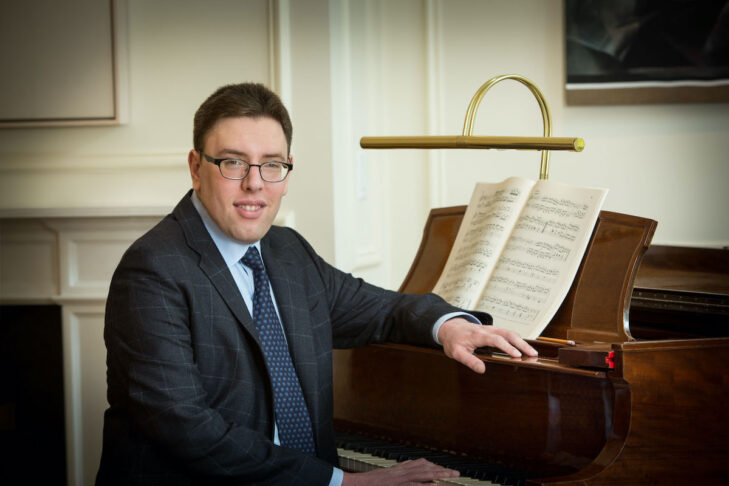 Jeremiah Klarman is a musician’s musician. The 28-year-old pianist and New England Conservatory (NEC) graduate is a mainstay of Temple Emanuel’s Shabbat Alive, a Friday night service celebrating prayer with music. On a given Friday night, Klarman can be found at the keyboard in what he described as “happily praying with my fingers.”

Klarman, unassuming and modest, recently spoke to JewishBoston about his musical career, the breadth and depth of his musical tastes and his love of gospel music. At NEC, Klarman majored in composition while concentrating on contemporary improvisation with Hankus Netsky as his mentor. “We could talk for days and days about the difference between improvisation and composition, but I also think they’re very connected,” said Klarman.

Netsky directed NEC’s Jewish Music Ensemble, of which Klarman was a member for his five years at the conservatory. Netsky is also a master of klezmer music and introduced Klarman to the genre. At Netsky’s suggestion, Klarman attended KlezKanada, an intensive week of Yiddish-based arts, and KlezKamp, a week-long celebration of Yiddish music and art. He described that time as a wonderful immersion into Yiddish culture. “I was lucky to study with Hankus,” said Klarman.

Klarman came to play at Temple Emanuel in 2008 when he was 15 years old. During his tenure, he has seen the temple introduce live music in its holiday services. At that first service in 2013, Klarman and a flutist accompanied the temple’s choir. Live music at services was not without controversy—some congregants were uncomfortable with having instruments played on Shabbat, yet others supported the idea of underscoring prayer with live music. In the end, Klarman and his mentor at the temple, Cantor Elias Rosemberg, organized four musical services the next year. The initiative has been blessed with success, and nine services featuring live music are in the works for the coming year.

However, it is Shabbat Alive that inspires Klarman. During services on the High Holidays or a Shabbat morning, Klarman is mindful that, “I’m there to support and accompany as opposed to someone who is on the same level as the singers,” he said. “But when I play Shabbat Alive, it’s with a group and I feel the excitement from the band and the singers. I’m not as mindful of how much I’m playing. It’s just a blast, and I love it.”

In 2017, Klarman was appointed artist-in-residence at Temple Emanuel. He works closely with Rosemberg in arranging music as well as composing for the liturgy. In 2018, Rosemberg asked him to set the “Prayer for Israel” to new music in honor of the country’s 70th anniversary. For the temple’s signature concert, “Hanukkah Happens,” Klarman has enjoyed rehearsing with the musicians. Among the many lessons he has learned at Emanuel is that his work is not a performance. “We’re all in it together,” he said. “I’m behind the keyboard connecting, and it’s a great feeling.”

Klarman got his first taste of gospel music at Temple Emanuel’s annual Project Manna concert, and the experience was revelatory for him. The concert is an interfaith initiative in which the temple joins with the Massachusetts Avenue Baptist Church. Other choirs—both Jewish and Christian—also participate. The event has been going strong for three decades. “We bring the house down at those concerts,” Klarman said. “At the end, all of the participating choirs sing together. One year it was the gospel song ‘Total Praise,’ and it was the first time I heard it.” Klarman also recalled that after another concert, he spontaneously jammed with one of the church bands. “I went over to the piano, and we all started playing simultaneously,” he said. “It was one of the most fun experiences of my life.”

Klarman frequently watches online services streamed from Black churches in New York City. He has learned many gospel songs in the hopes that he might play with gospel music more regularly. “I thought, wouldn’t it be amazing if I could play music for a church where there’s a lot of gospel music and preaching? A place where I could back up the preacher or play under them? It sounded like a dream,” he said.

That dream came true last month for Klarman when he was perusing job listings. He saw a notice for a church musician in Lowell. He applied for the position at New Bethel AME, and to his delight, he was selected. “It’s not a big congregation like Emanuel, but they have lots of energy,” he said. “I’ve been learning all these gospel songs. It helps that I have my ears and can take things up in the keys people are singing in.” Klarman added that his work at the church is “like an improvised collaboration. Temple Emanuel and New Bethel have different beliefs and practices but share the same feeling and energy. New Bethel has welcomed me and it is so wonderful.”

As for his creative practice, Klarman admitted that his perfectionism can get in the way of his work. He recalled that as a teenager, he produced more effortlessly. These days, the muse is more accessible when he is commissioned to write a piece. He said he doesn’t exactly have a process or a routine. “I’m not someone who sits down every day at the same hour and just writes,” he said. “When I do write, I’ll listen to music or play something to get in the right mood. In general, I’ll take up other instruments, including guitar, violin or drums. I’ll also play out my ideas on a little piano and turn on my recording app.”

One of Klarman’s notable achievements during the pandemic was setting Psalm 121 to original, resplendent music. The result is a stunning piece presented in a music video in which Klarman plays various instruments and sings against a backdrop of images associated with COVID-19.

The psalm famously begins: “I will lift up mine eyes unto the hills, from whence cometh my help. My help cometh from the LORD, which made heaven and earth.”

Some commentators have speculated the psalm was originally a traveler’s prayer for pilgrims en route to the Temple in Jerusalem. The last lines evoking God’s protective care—“The Lord shall guard thy going and out and thy coming in, from this time forth and forever”—give credence to that theory. However, coupled with Klarman’s gorgeous musical presentation, the psalm has become the perfect balm for these difficult times.

Plus Kids
Teach Children About the Holocaust, and Tell Them the Whole Story
By The Boston Globe
Top Pick
Edit
God Talk With Roz Weiner and Rabbi Michelle Robinson