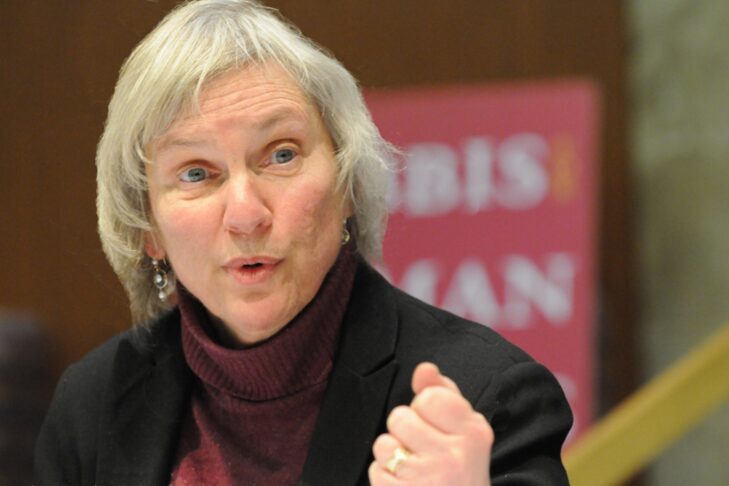 Paula Hyman z”l was a trail-blazing historian of modern French Jewry and the history of Jewish women; a feminist activist and pioneer of Jewish feminism; and a mentor to generations of students at Columbia University; the Jewish Theological Seminary; and Yale University.

Her scholarship, teaching, and activism, her students say, shaped the academic discipline of Jewish studies, and transformed how we view the Jewish past and present. But her own foundation, she always said, came from her time at Hebrew (Teachers) College.

Born in 1946, Hyman grew up in Mattapan, the eldest of three daughters. She began attending Hebrew Teachers College on Hawes Street in Brookline as a student at Girls Latin School, now Boston Latin Academy, the first college preparatory high school for girls in the United States. She continued, five days per week, during her final years of high school and her first two years of Radcliffe College, the sister school of Harvard, earning a BJ.Ed. from Hebrew College in 1966.

Hyman’s knowledge of Hebrew and classic Jewish texts was so advanced that when she interviewed for a doctoral program at Columbia University, “she impressed a professor by reading directly out of a classical Jewish text that the professor pulled off the wall,” recalled her daughter, Judith Rosenbaum, who is also an educator, historian, and writer.

“She was very proud of the Hebrew that she knew and the text skills that she developed at Hebrew College,” Rosenbaum said. “That was what made it possible for her to become a scholar of Jewish studies; she wouldn’t have gotten that same level of skill if she had just taken Jewish studies classes in college. I remember my mom saying, ‘Do you understand? I went to Hebrew school even when I was in college?’”

Hyman attended Hebrew College at a time when Jewish studies were not common in universities, and her dedication, persistence, and commitment to scholarship throughout her life helped Jewish studies become more integrated into the historical profession. She was one of the first female doctorates in a field dominated by men, and, throughout her career, she tirelessly promoted the careers of her students, as well as many colleagues. A feminist herself, she also championed gender equality in Jewish life and worship, including the ordination of women as Conservative rabbis.

Hyman received her MA from Columbia University in 1970 and her Ph.D. from Columbia University in 1975. Her dissertation, “From Dreyfus to Vichy: The Remaking of French Jewry, 1906–1939,” published in 1979, focused on the changing face of the French Jewish community as it absorbed Eastern European Jewish immigrants leading up to the war. The book was a finalist for the National Jewish Book Award in history.

Hyman began teaching at Columbia University in 1974 and taught there as an assistant professor until 1981. She then moved to the Jewish Theological Seminary, where she served as the first woman dean of the Seminary College of Jewish Studies. In 1986, she moved to Yale University, where she held the Lucy Moses Professorship of Modern Jewish History and served for more than a decade as chair of the Yale Program in Judaic Studies. She was the first woman to direct a Jewish studies program at a leading university.

Rosenbaum said her mother grew up in a family that prioritized education, especially Jewish education. Her mother, Ida Tatelman Hyman, wanted her daughters to have a Jewish education that was not available to her. Her father, Sydney Hyman, would drive her and her two younger sisters, Toby and Merle, now both attorneys, to Hebrew Teachers College every day.

Hyman and her husband, Dr. Stanley H. Rosenbaum, also prioritized Jewish education, sending Judith and her sister, Adina, to the Solomon Schechter Day School of Bergen County in New Jersey, and then to Makom, a community supplementary Hebrew high school program in New Haven with a special track for kids who had attended day school.

Rosenbaum, now CEO of the Jewish Women’s Archive, a pioneering national organization that documents Jewish women’s stories, elevates their voices, and inspires them to be agents of change, and a partner on Hebrew College’s new shared campus in West Newton, calls herself an “accidental Jewish professional,” as her graduate and post-graduate research focused on women’s health and women’s activism. But, like her mother, she wanted her scholarship to be “engaged in the world” and “not just a purely intellectual pursuit.”

During her career, Hyman co-authored five books, edited two others, and wrote more than 60 articles. She served as president or chair of several professional organizations and served on the editorial boards of several journals. Among her many awards and honors were a 1999 National Jewish Book Award and a 2004 Achievement Award in Historical Studies from the National Foundation for Jewish Culture.

Hyman remained proud of her connection to Hebrew College long after she left Boston for graduate school. She received an honorary degree from Hebrew College in 2010, the year before she died, and was thrilled when her son-in-law, Rabbi Or Rose, was hired as a professor. Rabbi Rose is the director and founder of The Betty Ann Greenbaum Miller Center for Interreligious Learning & Leadership of Hebrew College.

“She felt that was a meaningful connection,” Rosenbaum said. “Hebrew College was a very big part of her life, commuting every day after school. She always made a big deal about that, especially when I complained about going to Hebrew school twice a week. She credited Hebrew College with her strong foundation of Jewish learning. Her experience at Hebrew College was at once very academically rigorous, but also about investing in Jewish life and the Jewish community. I think it trained her to think about community as a commitment as important as her scholarship.”