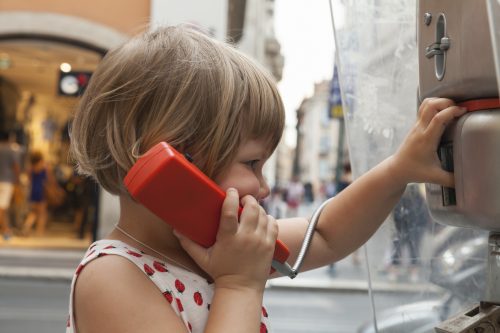 Ever heard your child say something so cute, insightful or downright hilarious that you thought to yourself, “I should really jot that down somewhere!”? Preschool teacher Leslie McCollom has those moments pretty frequently. Surrounded by funny, dramatic and creative kids all day at her “hippie” Portland, Oregon, preschool where she’s taught for almost four years, she writes down her favorite quotes and shares them via Twitter (@PreschoolGems). The feed of one-liners became so popular (179,000 followers and counting) that it just spawned her first book, “Preschool Gems: Love, Death, Magic, and Other Surprising Treasures from the Mouths of Babes.”

When I discovered Leslie’s brilliant Twitter feed recently, I knew a chat was in order (primarily because I spent a ridiculous amount of time reading past posts and laughing aloud to myself). My sister is a former JCC preschool teacher, and I remember her always calling me after work to share funny stories about her kids. They really do say the darndest things! After talking with Leslie about her experiences, I was inspired to start my own collection of quotes from local Jewish preschool teachers and parents. But first, a little more about Leslie, plus her suggestions for ways parents can remember their children’s funny moments.

What inspired you to start collecting these preschool “gems”? 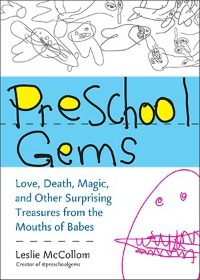 I had been teaching for about six months, and there was one child in particular who was really dramatic and creative and always spoke in these grandiose terms. I thought, “This kid is just too much!” A lot of my first quotes came from him. He was obsessed with stones and gems and shiny rocks, so the name “preschool gems” evolved from that. They are funny statements without context. I thought the kids were hilarious and I would go home and tell my friends these stories. People who don’t spend a lot of time with kids around this age might actually enjoy it more because it’s more shocking to them; they don’t realize how rich their inner worlds are. The kids are comfortable at school and let it all out! We have six classes and I go between them, but at recess they are all together. I get a lot of quotes from the playground.

Did you initially plan to share them in any way?

At first I started writing them down because I thought they needed to be saved, and I wanted to catalog them. My friend said they were perfect for Twitter and I should put them out there. I remember going home and starting the account and feeling like, people are going to love this! I felt like there was an opportunity there. Twitter is like magic; I just put stuff out there and people found me. There aren’t that many forms of entertainment that are pure fun and happiness. Even when the quotes are dark or introspective, they’re still pure.

How do the parents feel about seeing their kids’ musings online?

The parents at school are really supportive of it. I never use names, and I would never post a quote that was not respectful of a child. I’m never trying to make them look bad because I don’t find that funny. Some parents will follow me on Facebook and ask if a specific quote came from their kid. When the book came out people were asking what their kid had said. But they don’t always guess right! At school it’s like a homogenous kid culture where they’re interested in the same things at the same ages, so it’s hard to tell who said what. There are trends among them, and that’s cool to see.

How much do the kids know about the popularity of their words?

I had a reading at a local bookstore recently, and I really wanted the kids to be there. I encouraged parents to bring them and have them wear whatever they wanted so it would be a really kid-focused event. They sat in the first two rows and laughed hysterically the whole time. I think they were mostly laughing at each other laughing.

What’s your favorite “gem” you’ve heard from a student?

I have a few. There was one girl who was really intense. Her mom had recently been talking to her about the concept of life, and it was funny to hear it translated through her understanding. She said to another student who was having a tantrum, “Remember what I told you in the bathroom: life is more important than anything.” There was also a girl who walked up to me and said, “Do you know how babies die?” I thought, uh-oh, but she said, “They grow up and they get old!” And here’s one that’s Jewish-related: There was a feisty girl at our school last year, and one day after nap time the kids were working on puzzles. She went around the group asking, “Are you Jewish?” Several students said yes, and then she asked a boy who said, “I don’t know!” So she said, “You’re probably Jewish.”

What would you suggest to parents who want to remember the funny things their kids say?

If you don’t write them down, you’ll forget them! I would encourage teachers and parents to write these things down. It’s hard to find time in a busy day to do this, so I totally understand why people don’t. I carry a notepad with me everywhere, and I have to write them down immediately or I forget. You have to make it easy for yourself or you probably won’t do it. Try putting a piece of paper on the fridge and writing things there. Or ask teachers to tell you a few things your child said during the day and record things in a memory book.

So without further ado, here are some Boston-area tidbits I collected from my sister and her former teacher friends, a few parent friends and the teachers at Temple Shalom Nursery School.

Days of old
Teacher (age 25): “I used to horseback ride when I was a little girl.”
Child: “Was that because there were no cars?”

Relationship status
To teacher: “I love you a lot, but I can’t be your boyfriend.”

Geography quiz
Child, spotting the gold dome of the Massachusetts State House from the car: “Are we in Jerusalem?!”

Family genes
“I have my daddy’s jog.”

Curtain call
“I’m all alone on the stage of life.”

Hunger games
“Your belly hiccupped on me.”

Career aspirations
“I want to be a guitar-playing rabbi that fights fires.”

Bursting the bubble (wrap)
To teacher, after she took out bubble wrap to play with: “Why do you need the children to pop the bubbles?”

Pursuit of happiness
“When I grow up I want to be a mommy and do nothing.”

The God question
To mom, after switching from synagogue preschool to public-school kindergarten: “Does this mean we’re not Jewish anymore?”

Magical recess
“The playground looks like a fairy garden.”

British invasion
Child #1: “What does it mean to be ‘kosher’?”
Child #2: “It’s when things are fleishig or milchig.”
Teacher: “That’s right! Do you know what language those words are in?”
Child #2: “Yes, my bubbe speaks it. It’s…British!” 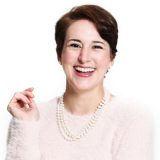