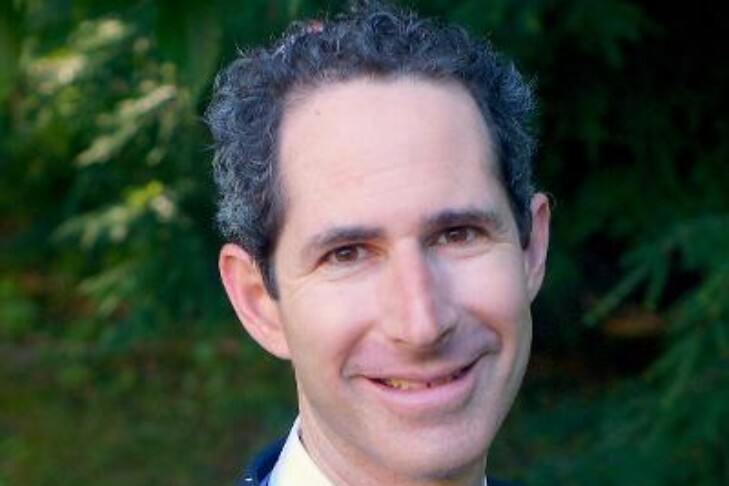 Cantor Ken Richmond of Temple Israel of Natick has accomplished something few people have even attempted. On June 6, he was ordained as a rabbi, becoming Rav-Hazzan Richmond. He is the first previously ordained cantor to complete rabbinical school at Hebrew College.

Richmond’s ordination was celebrated during Shavuot services at Temple Israel. Guest speaker at the Zoom service was Rabbi Daniel Judson, dean of the Hebrew College Rabbinical School. “Ken is one of few in the world to become both a rabbi and cantor. Few understand how difficult it is to reach this achievement. He did this while working a full-time job and raising three children,” said Rabbi Judson. “Moreover, at school he was always fully present. He never asked for special treatment or time off.” Judson went on to discuss modern Jewish thinkers that he and Richmond studied together, including Martin Buber. “Buber talked about what revelation means, how God reveals Godself. He wrote that it is a deep encounter with another person, to intuit how to treat others, how to be part of a community. This is what Ken is about.” In honor of his achievement, Richmond was also given blessings by the entire faculty of Hebrew College.

Richmond, who also serves as the temple’s family educator, has been cantor at Temple Israel since 2006. In an interview, the Newton native recalled, “I’ve thought about becoming a rabbi for a long time, including back when I was in cantorial school at the Jewish Theological Seminary and often took classes that were part of the rabbinical school curriculum. I think those like myself who are being ordained as both cantor and rabbi appreciate the intense training in Jewish text and thought, leadership and musical traditions, and are interested in having the versatility to serve a variety of congregational needs. Over the years, both learning from Rabbi Daniel Liben and filling in for him when he was away sparked my interest in becoming a rabbi.”

“The pluralistic approach at Hebrew College meant I was exposed to many ideas and perspectives from the faculty and my fellow students,” he continued. “I learned new modes of prayer, different ways of approaching Torah and Talmud, and different approaches to leadership, to being Jewish in the world.”

Temple Israel’s Rabbi Daniel Liben, recently retired, noted, “Ken Richmond’s unique blend of menschlichkeit (a Yiddish term for a moral and honorable person of good character), scholarship and skill has earned him the respect and love of the Temple Israel community, and I am grateful for every day I’ve worked with him. I don’t know many people who could have completed Hebrew College’s rabbinical program while serving an active, diverse community like Temple Israel at the same time. It is a testament to his deep desire to serve the Jewish community, as well as his love of serious Torah study.”

Richmond graduated from the H.L. Miller Cantorial School at the Jewish Theological Seminary in New York in 2004, after completing his undergraduate degree at Yale University, where he majored in music and pre-med. He was accepted to medical school, which he deferred and eventually declined. “I enjoyed being a cantor so much I gave up on medical school,” he recalled.

Richmond and his wife, Rabbi Shira Shazeer, are deeply involved in the Yiddish revival movement. They are raising their three sons, ages 13, 11 and 7, in a Yiddish-speaking household. Every summer the family attends Yiddish Vokh (Yiddish Week), a Yiddish immersion week, with classes and activities for all ages. Richmond and Shazeer are also klezmer musicians and singers. (Klezmer is a musical tradition of the Jews of Central and Eastern Europe.) Richmond founded and played klezmer violin with the Yale klezmer band and the Klezmaniacs. In 2015, he was chosen by The Forward as one of “21 Jewish Voices That Move Us.” Richmond also served on the Rabbinical Assembly’s Mahzor Committee (the international association of Conservative rabbis), which developed the Lev Shalem Mazhor, a modern prayer book for the High Holidays.

The Hebrew College Rabbinical Class of 2021/5781 created a scholarship fund to support students at the rabbinical school. In honor of the new fund, each graduate offered a personal statement. “The journey from cantor to rav-hazzan has been transformative for me, and I hope that those I spend time with will feel that I have emerged a better teacher, thinker, leader, human being, davener and listener,” wrote Richmond. “May each of us be blessed to widen our circles of chaverim makshivim, of listening companions, to speak in a way that others can hear us, and to listen generously in a way that encourages those around us to share their thoughts, their dreams and their Torah.”

In case people are confused about how to address him, Richmond explained, “While I’ll respond to all titles, or no title, both titles are important to me and represent important parts of the work and some amazing people that I’m proud to be associated with. I prefer Rav-Hazzan—or Rabbi-Cantor—Richmond to be formal, or Rav-Hazzan Ken, but I’ll respond to Rabbi Ken or Cantor Ken, among other permutations.”