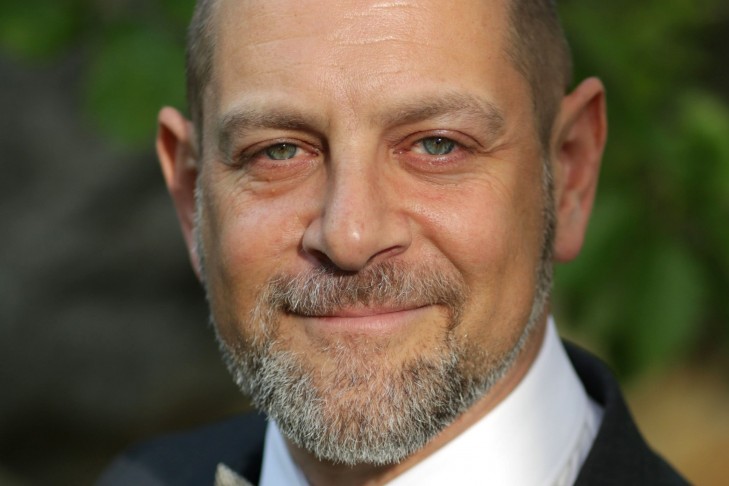 Rabbi Amichai Lau-Lavie is breaking new ground with his approach to interfaith marriage. A graduate of the Conservative Jewish Theological Seminary (JTS) in 2016, he recently released a 58-page study called “Joy: A Proposal.” The well-researched document is replete with detailed sources, many of which are biblical and Talmudic, to explain his decision to officiate at interfaith weddings that meet his high standards for Jewish continuity.

Storahtelling eventually led to the 2012 founding of Lab/Shul, a hip downtown community known as “an everybody friendly, artist-driven, God-optional, experimental community for sacred Jewish gatherings based in NYC, reaching the world. The Lab/Shul community is dedicated to exploring, creating and celebrating innovative opportunities for contemplation, lifecycle rituals, the arts, lifelong learning and social justice.”

Lau-Lavie recently spoke with JewishBoston about his community, “Joy” and why he decided that now is the time to take on interfaith issues publicly. Originally from Israel, Lau-Lavie comes from a long, eminent line of Orthodox rabbis. As a self-proclaimed outsider—an Israeli in America and a gay man who was once Orthodox—he empathizes with interfaith families. “I know what it’s like to be ostracized and to be partially welcomed,” he noted. “I know what it’s like to hop between identities, to be hyphenated. Perhaps that influenced me to be considerate of the plight of people who are looking for a way to be part of the Jewish community.”

Before attending JTS, Lau-Lavie married interfaith couples as a layman under certain conditions. He said he wanted to refine a Jewish process for interfaith couples that led to a Jewish wedding and ultimately a Jewish home. In Lau-Lavie’s model, conversion was not the goal; neither was what he described as an “either/or scenario where you’re Jewish, or you’re not Jewish. It was a blurring of both, and it came with a trust that if I welcomed the interfaith couple into my community and really turned them on to what Judaism has to offer their modern complicated lives, they’re going to want more.” Given that situation, Lau-Lavie sees himself as a “salesman.” He’s convinced he has a great product that simply needs to be updated to “speak to who and what we are now.”

While still a rabbinical student, Lau-Lavie tried to initiate a “deep conversation” at JTS about interfaith marriage, but was rebuffed. He said that just before he graduated JTS, he knew he had to decide where he stood on interfaith marriage. Lau-Lavie is emphatic about his respect for the Conservative movement and his teachers at the seminary. “I went to JTS convinced that the philosophy of the Conservative movement was the appropriate philosophy for this moment in time,” he said. “I came to study what halacha—Jewish law—has to offer history and vice versa.”

After his ordination, Lau-Lavie took a sabbatical to focus on the issue of interfaith marriage. He was seeking the middle ground, or what he calls “liminal categories of Jewishness,” that he said exist between either/or situations and Jewish/non-Jewish identities. At the end of his year of intensive study, the result was “Joy: A Proposal.”

The proposal begins with the assertion that “modern Jews prioritize love over tribal obligation when choosing a life partner. These priorities and choices do not always conflict.” To make his point, Lau-Lavie refers to two models that exist in rabbinic literature in which a non-Jew is part of a Jewish community as either a ger toshav—a resident alien who has interactions with Jewish communities, or as yirei hashem—the “pious ones” who participate in Jewish communal life. In conversation, Lau-Lavie further explained that these “middle statuses are based on historical models that were created by the rabbis in the Greco-Roman world when they were confronted with a situation not unlike ours today.”

Lau-Lavie hopes his proposal will be examined by experts in “the Jewish legalistic world, and will be adapted to reflect the times and offer this middle status.” He expects there will be a number of questions to come out of such a status: What role will a ger toshav or the yirei hashem have in Jewish ceremonies? How will their status affect their children? Lau-Lavie does not claim to have all the answers, and said the questions will most likely be answered on a case-by-case basis.

As for the term “Joy,” it is a blending of the words Jewish and goy—a placeholder for this middle status. Lau-Lavie said some people think the hybrid word is too cute. In Israel, the term is embraced as a softer version of the word goy. “It’s a lighter word for Israelis,” he said. “But since ‘Joy’ has come out, Israelis living all over the world, who are in relationships with gentiles, have written to me. It’s a phenomenon that no one wants to talk about in Israel, but it’s growing. There is a lot of resistance to it because of the mixing between Arabs and Jews.”

The arrival of “Joy” in the public square has ultimately moved Lau-Lavie and some of his Conservative colleagues to consider his thought-provoking question: “Are we going to be either/or and build higher walls that separate us, or are we going to celebrate the integration and the global? We need to focus on what matters most to us and celebrate that.”