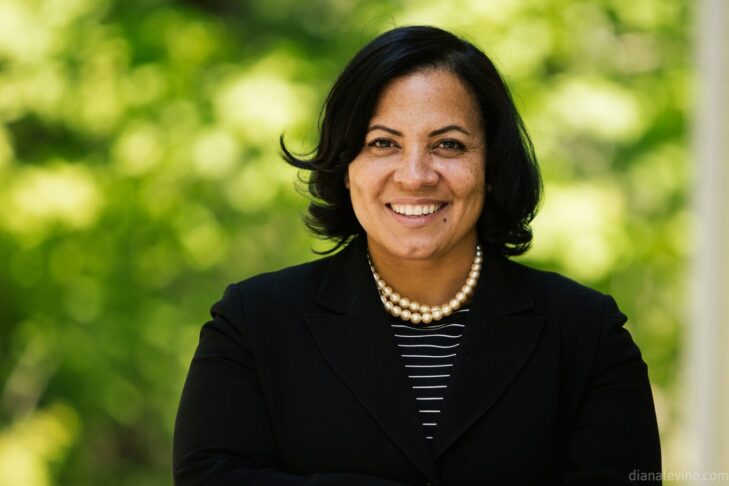 When Rachael Rollins was the Suffolk County district attorney, she knew that tip lines existed for individuals to report crime-related information to the police. Since becoming the U.S. attorney for Massachusetts in 2021, she has wondered about the possibility of making a tip line to report hateful activity. Now she has made that a reality.

“I firmly believe we can root out the individuals that are engaging in violence and harm,” Rollins told JewishBoston last Thursday. “It’s going to take an effort. We’re going to need community involvement.”

She described the tip line as “a place where people would feel comfortable calling with as much information as they wanted—their name and number, or anonymously—with concerning or troubling behavior that they believe is based on an ideology of hate.”

This can include “really scary things said by individuals that you know and love.”

One direct reason for establishing the tip line was a march by white supremacists through Boston on July 4th weekend, in which Charles Murrell, a Black artist and activist, was allegedly attacked. Another reason was troubling data from the Anti-Defamation League: There was an increase in hate crimes related to both immigration and antisemitism, with Massachusetts ranked fourth in overall hate crimes nationwide. Rollins also cited an increase in hate crimes against the Asian American and Pacific Islander community due to misinformation around COVID-19.

“All of this kind of swelled in my head,” said Rollins, who also cited hateful vandalism in Hyde Park at a future senior housing facility for LGBTQ+ community members.

As of last Thursday, the tip line had received almost 50 calls. Some were hateful messages, but others offered the very sort of information that the number was intended to address.

These latter calls, Rollins said, were “either incidents that certainly needed to be brought to the attention of law enforcement—a hate incident—or something that may not cross that level into criminal conduct but are certainly behavior that the police want to be aware of or the community needs to be aware of.” Rollins personally listens to each call, and her office documents it on a spreadsheet.

She noted that the tip line is available in multiple languages. They include English, Spanish, Cantonese and French, according to a press release from the Department of Justice.

The goal, Rollins said, is to “make sure things are in the languages of certain communities who are unfortunately targeted frequently,” and that these communities “are capable of getting information from the government in a form they understand 100%.”

As both Suffolk County district attorney and now as U.S. attorney, Rollins has led the legal battle against numerous antisemitic incidents. These include the July 1, 2021, attack against Rabbi Shlomo Noginski of Shaloh House in Brighton. Noginski was stabbed eight to nine times by accused assailant Khaled Awad. Rollins, who was then the DA, charged Awad with a hate crime. She credited Noginski with quick thinking during the attack, running away to make sure the assailant did not get near the day school.

“I stand in solidarity with the Brighton community writ large—certainly the Jewish community within Brighton and at the day school,” Rollins said.

In her current position, she often consults with Robert Trestan, who until recently was the head of ADL New England before being promoted to head the organization’s Western regional office.

“I certainly consider him a friend,” Rollins said. “I hope it’s mutual.”

She called Trestan not only a champion of the Jewish community, but also a defender of other minority groups, including the Black community, the LGBTQ+ community, the Asian American and Pacific Islander community and the Muslim community.

“My first assistant attorney is an exceptional lawyer and partner in the work I do,” she said. “He is also an active member of the Jewish community. We talk frequently, certainly about everything the office handles. He’s incredibly helpful to me as well.”

Rollins and Trestan were both on a panel that discussed the Mapping Project, an anonymous website created earlier this year to identify institutions and organizations in Massachusetts that it claimed supported Zionism and the colonization of Palestine, along with other issues such as U.S. imperialism and gentrification, with the goal of disrupting and dismantling them.

“To many people, it’s terrifying to have individuals or locations put out publicly,” Rollins said. “People feel targeted.”

During the panel, she explained that a letter had been sent to U.S. Attorney General Merrick Garland asking for guidance. No response had been received when she spoke with JewishBoston.

Since becoming U.S. attorney, Rollins has been in contact with multiple Jewish community leaders about other incidents. These leaders include Rabbi Mendy Krinsky of the Chabad Jewish Center in Needham and Rabbi Avi Bukiet of the Chabad Center for Jewish Life in Arlington-Belmont. Both Chabad houses, along with the Cohen Florence Levine Estates in Chelsea, were targeted by arson in 2019. The unnamed suspect died after falling into a coma that year, but his brother, Alexander Giannakakis, has been indicted.

“I think it shows that we never stop looking,” Rollins said. “It’s really important to let the community know that we’re not going to stop until we get the answer.”