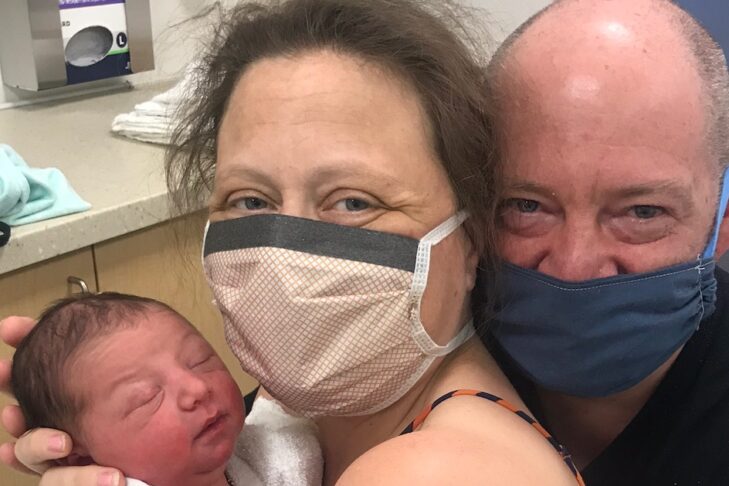 Somerville’s Rachel Benedict had a big March 2020: She got married, planned her baby shower…and then COVID-19 hit. Without family nearby, she and her husband, Josh Ben Lederman, relied on one another during this turbulent time—made even more turbulent during an intense delivery and her son Leon’s stay in the Boston Children’s Hospital NICU. Happily, everyone is now settled in at home, and Rachel shared their story with JewishBoston.

Tell us your birth story!

I’ll start with the fact that my baby shower was scheduled for March 14, and, in fact, we still have the decorations up in our house! I think we’re going to take them down once we finally get vaccinated. That weekend we also got married. It was the last wedding performed in Cambridge City Hall before they shut down for COVID-related reasons, and no baby shower. The last part of my pregnancy was pretty stressful because we didn’t really feel like we knew how people got COVID. Every time I walked by people on the street, I wasn’t sure. I’m an immigration attorney, so I was supposed to go to court, and that was extremely stressful. I was really, really stressed about how that might impact my pregnancy, but luckily the court shut down for a short period of time.

I had a doula, but we were notified that you could have one support person in the hospital, so the plan was that my husband would be my in-person support person, and that I would try to labor at home as long as I could and then give birth at Mount Auburn. We’d try to minimize the amount of time in the hospital, and that way the doula could be at home to help. I think that probably would have been my plan even without COVID, but I think I would have not cut it quite so close. On the day I gave birth, May 4, a few days before my due date, I woke up and I was having contractions. I actually had a scheduled appointment with my midwife, and I went in and she said, “You know, you’re four centimeters dilated; you could give birth today or in a few weeks.” My appointment was at 8 a.m. I remember at 1, I ran down to mail my final application to U.S. Citizenship and Immigration Services, and the contractions were really starting to get closer together. I made sure to tell my husband, who was home that day, my plans, in case I needed to call him from the mailbox.

Did you feel any nervousness about going into the hospital?

Yes, I felt super nervous. And, you know, I remember some other folks were talking about doing a home birth instead. I thought about it, but that seems like something you need to plan for far in advance and prepare for, and that had never really been my plan. For me, a midwife in the hospital was the right combo of trying to have an unmedicated delivery without much assistance, but in a hospital setting. Mount Auburn was not really one of the places where a lot of folks with COVID were being treated at that time, and it has a separate [birth] wing. That all made me feel better. But that was one reason to try to labor at home for as long as possible.

But they had stopped having in-person birth preparation classes. It took Mount Auburn quite a long time to put them online. I’m not saying they did anything wrong, but it was my first time, and my family is all out of state, and they couldn’t travel to be here. I had been there when my sister gave birth to both her children. To not have her there, to not have my step-mom there, to not have my mother-in-law there, who’ve all given birth, whom I thought would be really helpful, that was stressful. We did watch some classes on YouTube, talked to my doula and I talked to my sister more, but it was added stress.

Did you get to the hospital in time?

I got home [from the mail], and then the contractions started to come really close together. But it was all back labor, so I wasn’t sure how close I was. And it was extremely painful. My husband called the midwife, because I was screaming too much, to ask if it was time to come in. The midwife picked up the phone from Mount Auburn and heard me scream in the background and said, “Yes, it’s definitely time when the mother’s screaming that much.” Then my doula came, and she also said it was time. Apparently, I was really close. I already started having the sensation of needing to poop. I’m sorry; I don’t know a more polite way to say it!

We got to the hospital. They didn’t do a COVID test, but they took our temperatures and asked us questions about traveling and all that. And I said, “I really have to go to the bathroom!” I remember being so embarrassed that I was going to make a big mess. And the nurse who checked us in was like, “No, you’re going to give birth. No, no, honey. You’re going to give birth. Let’s get you in.” I was fully dilated, and I was screaming for an epidural. And they said, “Nope, nope.” My birth plan went out the window. It was too late. I pushed for 40 minutes, and then our baby was born. And so, really, it was very close. We were really cutting it close.

How did you feel when you got home without access to family and other visitors?

So, actually, our baby was in the NICU for two weeks. That was really stressful, because it’s always stressful to have your baby in the NICU. He had some oxygen desaturation problems, so they wanted to monitor him. And everybody at Children’s was so great. Everybody took such good care of our baby. But to have to wear a mask—I just remember I wanted to smell his little head because he smelled like baby, and to have to wear a mask was so hard. I was trying to learn how to nurse him while wearing a mask, and that was also really, really hard because I needed to try to stay calm. And I couldn’t. I actually couldn’t. We didn’t learn how to nurse until he came home. 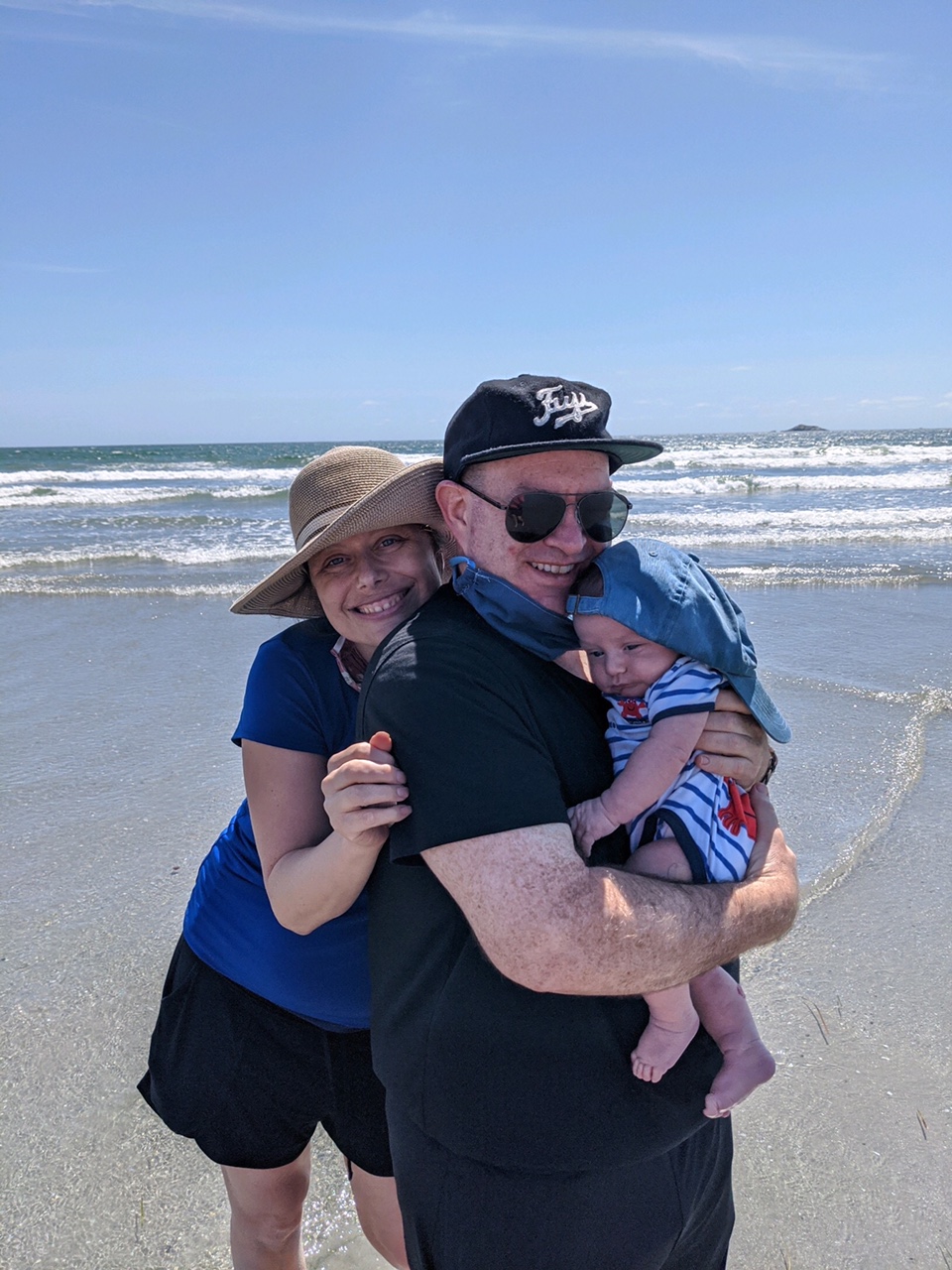 What were your coping strategies?

My husband and I really leaned into each other because we couldn’t have any family. We don’t have any local family. Our friends also offered to come, but we were going in and out of the hospital every day; we didn’t want to possibly expose anybody. But we really leaned on each other and talked to each other a lot when we were scared or tired or afraid. And that really helped, and it really also helped that our community, Jewish and otherwise, sent lots of food and lots of support.

What was it like to actually be parenting a newborn through the summer, once you got home?

Two weeks after he came home from the NICU, maybe slightly more, some of our family did come to visit and help. And that was really, really great. We wanted them to get tested, but there wasn’t really the ability. They were coming from Ohio, and their testing was not very widespread back then. And my dad asked his doctor if it was safe. We were mainly concerned about my dad because he’s in his 70s, and his doctor said, “Go, and show me some pictures!”

Our baby’s pediatrician had said, “No, your baby shouldn’t see anybody.” It was a really difficult decision. It’s difficult to think about the risks and weigh them, but ultimately, our baby had been COVID-tested in Children’s and he was negative, and we had waited a few weeks from when we left the hospital just to make sure we didn’t show any signs. We felt comfortable with that. We started to go for more walks, and we went to the park. Eventually, in late summer, some other moms and babies and I started to meet up in parks. We stayed six feet away and wore our masks, and it just felt really good to see people in person.

Did Judaism play into your story at all?

Yes, absolutely. Because Leon was in the NICU, he ended up being circumcised there. We might have made a different decision if not for COVID. But we just didn’t want, God forbid, something to happen. On his eighth day, we put his kippah on him and said some blessings. That wasn’t when he was actually circumcised, but while he was in the NICU, surrounded by all those people, we just wanted to do something special. And then he had his circumcision on his last day, his 14th day, his last day in the NICU. And then I think we also put his little kippah on him that day. It was very sweet.

I think it was June or July when we had a Zoom baby blessing, a baby welcoming ceremony with a rabbi, which was also really, really special because it allowed our relatives who wouldn’t have otherwise traveled to attend. And everybody really liked it.

How did this experience change you?

We got married in March, when I was extremely pregnant. One big takeaway is that in a really, really hard situation, we can lean on each other and get each other through. And that’s really important for the rest of our life, I think, to know.

Also, that I’m really strong. I can go through incredibly difficult and painful back labor at home and then give birth, unmedicated, during a pandemic. I’m trying to carry that with me. That means I can do other really hard things. And our baby is really strong. He doesn’t know anything different. But he can be in the NICU, and he can learn how to nurse when he’s 2 months old after working on it every day—which was really hard because he started later than a lot of other babies do.