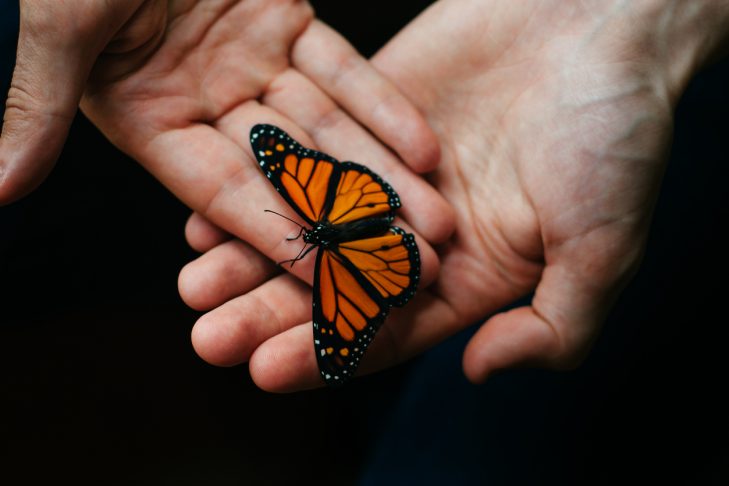 Welcome back to our “Here I Am” online book club! We’ve come to Section II, “Learning Impermanence.” Missed our Section I review and discussion questions? Catch up here.

You may be familiar with an old wisdom tale, attributed to a variety of traditions, in which a skeptic with a butterfly hidden in her hands approaches a sage. “Is the butterfly dead or alive?” she asks. The sage pauses to think and then replies: “If I say it is alive, you will crush and kill it. If I say it is dead, you will open your hands and set it free. So, the answer to that question is really up to you; it is in your hands.”

It’s easy to think that what is before us is all that is. But no matter how binary a moment appears, there’s almost always a third way, a parallel reality, an idea you haven’t considered. We depend on the intangible to teach us important lessons about the tangible because nothing lasts forever. Read that twice: Nothing lasts forever. Because no thing can last forever, but also because “nothing” will endure until the end of time.

All the drama in this section of “Here I Am” is about the lives we cannot see, which may or may not exist and whose existence is entirely dependent upon us. This happens most concretely in “Other Life,” the video game Sam uses to escape the realities of adolescence. There, he feels in control of life, despite the many ways in which his life is out of control. His parents struggle to understand. They call his experience with the game “playing,” though for Sam it is “life,” rather than “play.” Neither Jacob nor Julia recognize the other life in their own lives, as they dodge reality just as much as their son. When Jacob tries to enter “Other Life” to better understand what Sam is drawn to, he accidentally kills off Sam’s avatar (or video game alter ego), echoing the way all of their lives are going off the rails.

It’s not that I think the lives we see before us are the only lives we can lead or the only ways we can experience reality. In 16b-17a of Talmud Tractate Ketubot, we read how our rabbis answered the question, “How does one dance before the bride?”

The House of Hillel said to the House of Shammai: “According to your words, if someone makes a bad purchase in the market, should one praise it in front of him or denigrate it? Surely one should praise it before him.” Therefore, the sages said, “One should always have a pleasing disposition in front of other people.”

Jewish tradition considers telling the truth to be an essential virtue (“Thou shalt not bear false witness against thy neighbor” is one of our top 10), and yet this Talmudic story seems to call that value into question, or at least softens its edges. Is it dishonest to tell the bride she is beautiful? Hillel is not saying it’s OK to lie, but rather that all brides, as a category, are beautiful. To say otherwise would serve no purpose other than to cause pain. In “Here I Am” and in our own lives, we are grappling with the relationship between truth and fiction.

We are in an unprecedented era of “alternative facts.” When you are referring to a conflict over verifiable information, there can be no such thing, but spin and data interpretation are far less clear. We now know that two narratives can co-exist and be equally true for the people who own them (check out novelist Chimamanda Ngozi Adichie’s amazing TED Talk, “The Danger of a Single Story”). Multiple narratives can represent pieces of a greater whole, true for those who have experienced their own, but incomplete without the rest of the picture. Just because you can’t see it doesn’t mean it isn’t there. It’s a delicate balance. Seeing the world as we want it to be, rather than as it is, can help us aspire to do something great. If we are lost in an alternate reality, though, the world as we know it will suffer, and just like the Bloch clan, so will we.

Which world to choose? It’s in your hands.

Who in this book is using alternate reality as a roadmap to improvement? Who’s just trying to escape? If you could give any of these characters advice, what would you say? Share your thoughts below!

Have questions about any of the terms or references used in the book? Please let us know in the comments. Here are four references from Section II you may have wondered about:

Other Life (page 16)
“Other Life” is a massive multiplayer online role-playing game, similar to “Second Life” and “Minecraft.”

Talmud (page 134)
The Talmud is a foundational compendium of Jewish law, compiled over the course of three centuries, roughly 200 CE through 500 CE.

Franz Rosenzweig (page 154)
Franz Rosenzweig was a late 19th-century German Jewish philosopher. On the verge of converting to Christianity, he is said to have been so moved by hearing the melodies of “Kol Nidre” on Yom Kippur that he found his way back to Judaism.

Plus Kids
I Never Thought I’d Send My Kids to Jewish Day School
By The Rashi School
Top Pick
Edit
From Stressed to Resilient: An Evening With Dr. Deborah Gilboa