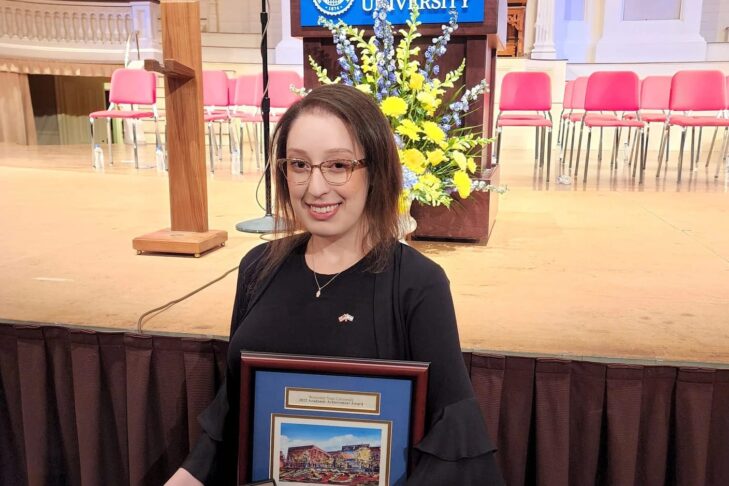 Karen Shalev (Courtesy photo)
Worcester State University graduate and Commonwealth Honors Scholar Karen Shalev received summa cum laude honors for her 4.0 GPA. Karen received numerous honors, scholarships, and awards during her time on campus. Most recently, her academic achievements were recognized in her dual majors as the recipient of the Tarmey Family Endowed Communication Award given to the highest-ranking senior majoring in communication and the Malcolm Gordon Memorial Award given to the highest-ranking senior majoring in visual and performing arts.
During her senior year, Karen also served part-time as the New England campus coordinator for StandWithUs, an international nonpartisan education organization that supports Israel and fights antisemitism. She is transitioning to full-time in her role after graduation. Karen states that beyond pure academics, her “dedication and commitment to standing up for Jewish students on my campus as a StandWithUs Emerson Fellow and now working with students across New England as the campus coordinator played a significant role in receiving the awards.”
Karen was active in numerous extracurriculars during her time on campus, serving as the Student Government Association president after being elected by her peers and as a Presidential Student Ambassador chosen to directly represent the university’s president. Karen also co-founded and served as president of the Chabad on Campus at Worcester State, as well as the president of Delta Alpha Pi, Gamma Chi Chapter. She was involved in numerous honors societies, including Lamba Pi Eta, the communication department’s honor society, and Alpha Mu Gamma, where she was the first student at Worcester State inducted into the honors society recognizing excellence in foreign languages for excelling in Hebrew. She created Worcester State University’s first stage management manual and conducted a research project into the effects of the COVID-19 pandemic on small businesses to develop methods to support Worcester area businesses.
Along with continuing her role with StandWithUs, Karen plans to continue her studies at the graduate level at Clark University. She began pursuing her master of science in communication during her senior year as part of a joint articulation agreement between the two universities. She notes that continuing her graduate studies “reinforces the importance of a communication degree and its practical applications in the professional world.”