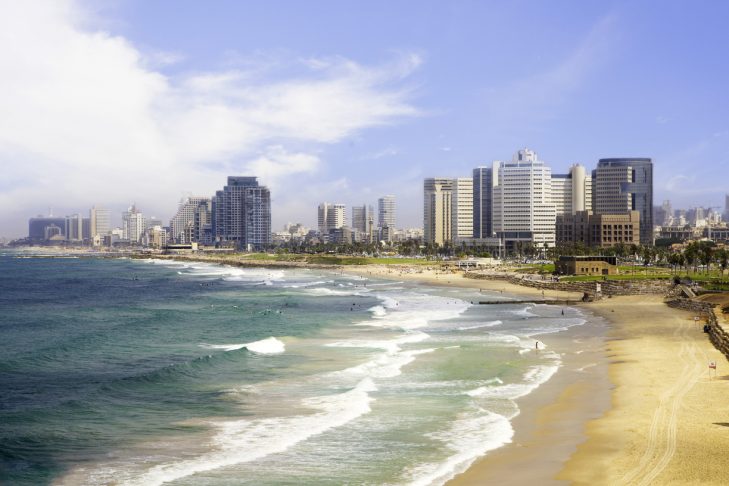 Our day began with a great presentation by Stand With Us, an international Israel education and advocacy organization. We have been inspired to share our personal Israel stories with friends and family, colleagues, and on social media as a way to support Israel and to teach about Israel. Pictures really do say a thousand words, and PJ Library Parents to Israel are already sharing their Israel pictures on social media. I am sure with each picture they share with you, they will have a story to tell as well.

We then spent the morning exploring the Jewish Quarter of the Old City in Jerusalem, beginning with a visit to the impressive Western Wall Tunnels. Seeing and touching the stones and walking in the tunnels fed our imaginations about just how grand and massive the Second Temple must have been. As one of the parents said, “It was super cool to walk in the tunnels.” Another parent questioned whether the gargantuan size of some of the stones would qualify the tunnels as the eighth wonder of the world. The pictures do not do it justice; you will have to wait to hear from someone who is on the trip about the awesome Western Wall Tunnels. It really was super cool to experience something so ancient and literally walk in the footsteps of history.

Our next stop was private time at the Wall. The scene was an opposite one from Friday evening, when there were thousands of people singing, dancing and praying at the Wall, welcoming in Shabbat. Today we were able to have an up-close-and-personal experience with the Wall, having the time and space to reflect, pray, think, or perhaps dream. Our time at the Wall was the perfect way to say shalom to Jerusalem.

Then it was on to TEL AVIV! Our hotel is on the beach, and the Mediterranean at our feet. Some of the brave amongst us immediately went for a swim! Our down time was short today because we were invited guests of the Bar Lev School in Petah Tikvah for Yom HaZikaron, Israel’s Memorial Day.

Scheduling PJ Library Parents to Israel at this time of year was by design. When in Israel during the next couple of days, first with Yom Ha-Zikaron (Memorial Day), immediately followed by Yom Ha-Atzmaut (Independence Day), one can truly and fully comprehend the very essence of Israel.

We were the guests of the Bar Lev School in the city of Petach Tikvah to commemorate Yom HaZikaron, which began at sundown and was marked with a blaring siren, which was the same scene repeated in every community around the country. Yom Ha-Zikaron is a national day of remembrance, where loved ones who were killed in service to Israel or in terrorist attacks, are remembered and mourned. The atmosphere across the country is sad and somber. Everyone is touched by loss—mothers, fathers, sisters, brothers, sons, daughters, and friends. (We dressed in black and white attire out of respect.)

Israelis will remember, commemorate and mourn for the next 24 hours. Most everything is closed. A feeling of respect fills the air. Since being declared a state in 1948, just 69 short years ago, the country has been under constant attack, fighting wars and combating terrorism sometimes on a daily basis. Israelis understand all to well the exorbitant price that is paid for the privilege of a free and democratic society.

Israelis do not protect their children from the sadness of the day. Children of all ages attended and participated in the very moving memorial commemoration. Though we did not understand the readings, prayers, songs and speeches of the memorial service since they were all in Hebrew, we certainly understood what was happening. We stood as one with the families of the Bar Lev School as they remembered loved ones and friends who are no longer with them. I believe this day helps to build Israeli’s resiliency as individuals, as a nation, and as a people. Many of us walked away understanding there is no greater wish than for peace.

Tomorrow we will tour Tel Aviv, and perhaps enjoy a swim in the Mediterranean, or a beautiful, long walk to the port of Jaffa in the afternoon. Then, the switch will be made from somber to celebration with arrival of Yom HaAtzmaut, Israel’s (69th) Independence Day, at sundown. We will visit Independence Hall, where the declaration of the State of Israel took place 69 years ago! Wow, talk about exciting! A night of partying in the streets, fireworks and joy is in our future!

Everyone is well, having fun, deepening their bonds with Israel and with each other. I am sure they will be very excited to share their new experiences with you when they return home later this week. With only a few days left in Israel, some parents are already saying they are sad to be leaving. I am happy to hear that many are looking forward to returning to Israel again soon.

With love from PJ Library Parents to Israel by the stunning shores of the Mediterranean Sea in Tel Aviv.