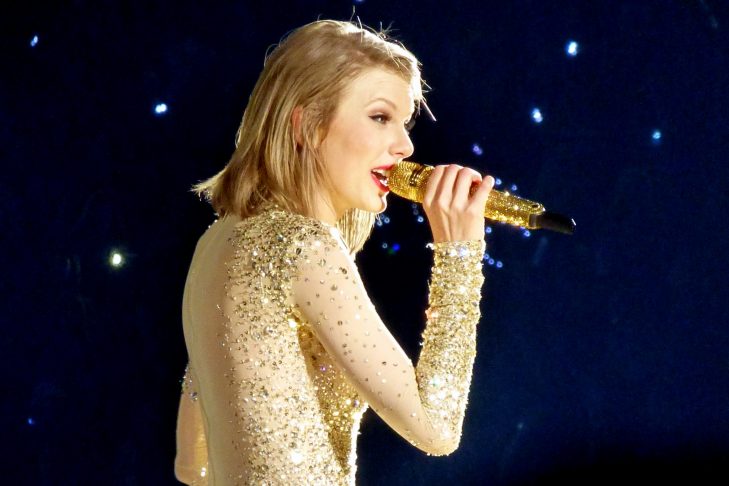 “I never trust a narcissist/But they love me/So I play ’em like a violin/And I make it look oh so easy.”

And with that delicious line from “I Did Something Bad,” Taylor Swift scoffs at the haters and completely owns the newer version of herself. For all of you who called her a narcissist on the 1989 tour when we all thought we had reached peak Taylor…well…”Reputation” is for you. She doesn’t care.

Needless to say, this is a far cry from Taylor 1.0, who hung out strumming her guitar, singing about love and waiting for Romeo. Well, friends, Taylor-in-her-country-home is long gone (or dead if you ask “Look What You Made Me Do”) and has been replaced with grown-up Taylor, who now drifts in and out of Ubers and Manhattan apartments, with stops at da club in between; we’re all getting older and perhaps more jaded, and so is she. “Reputation” channels the new Taylor in some amazing new directions, and it’s safe to say that not only is the evolution and revolution of her brand ongoing, but it also doesn’t look like she’s ever going back.

Since the “1989” release two years ago and her subsequent conquering of the known universe, many wondered if Taylor was beginning her inevitable fall from the top of the heap. The concerts were huge, the guest friends/best friends who cameo’d their way through the stage tour were huger, and it perhaps was, in fact, a little much, even though we’ll always have the “Bad Blood” video to remind us of those times.

But make no mistake: The new Taylor is here to stay and is now even wiser and savvier. Taylor 2.0 is most definitely not picking out a white dress, singing from the bleachers, or waiting for her white-bread boyfriend to talk to her daddy. Now, she is kicking ass and taking names and dropping heavy innuendos (see: “I only bought this dress so you could take it off”) while also dropping the S word and preaching about making herself bulletproof. And remember when she was giving advice on “How You Get The Girl?” just two years ago? Well, I guess that was enough of that; now it’s more like “How You Get Rid Of The Boy” as she riffs through the outstanding “Getaway Car” about how she broke up with Calvin Harris for Loki Tom Hiddleston and drops additional knowledge in “I Did Something Bad” like “They never see it comin’/What I do next/This is how the world works/You gotta leave before you get left.”

On the one hand, “Reputation” is a triumphant FU to haters and exes, but on the other hand she can’t escape some flashes of hope and love, and the album is more or less a conversation between the Two Taylors, as there are shots at Harris and Kanye that intersperse around odes to love and Joe Alwyn. It’s a balance, yes, but it’s a haunting new sound, an olio of EDM, industrial pop, dance, and more that goes a few shades darker and deeper than “1989,” albeit with bursts of her trademark lyrical genius and occasional softness.

That’s not to say that it didn’t take some getting used to. After all, “22” wasn’t so long ago, when she was hanging out in the backyard and it still felt like a high school party just a touch more inappropriate than Carly Rae Jepsen, or at the very worst a somewhat-under-control college situation. Compared to that Taylor circa 2012, “Look What You Made Me Do” feels like an alien invasion, leading with an in-your-face smugness and attitude that not a few people immediately dismissed as unlistenable, present company included. But keep trying and it gets you, which is exactly what happened with “Shake It Off” two years ago and, well, you know how that ended up. After a while I kind of got it, and now I almost love it (except for the “she’s dead” part), plus the end of the music video is freaking amazing (start that at 3:36) and the Kyle Hanagami choreography video is, well, perhaps more amazing.

There’s plenty of clubby-catchy on the new album, with “Ready For It” leading that charge, and I’m ready for the dancehall remixes for a lot of these tunes in the coming weeks. New release “End Game” is also a solid torch-bearer, with old friend Ed Sheeran (and Future) showing up yet again, but it does require a small suspension of disbelief to believe her when she tells us, “I swear I don’t love the drama/It loves me.”

But for my money, leading the pack is the “I Did Something Bad,” a sassy and triumphant proclamation of girl power and dare-I-say callousness that is a lot sassier and serious than “Bad Blood” was, featuring the aforementioned lyrics and another come-at-me-if-you-dare moment when she drops, “They’re burning all the witches, even if you aren’t one/So light me up.”

Not to worry, though, there are great songs on this album that aren’t defiant. “Delicate” is a dizzyingly beautiful track, a smooth, honest, and hopeful reflection on finding romance in a world where her reputation has “never been worse,” all laid over a sick beat, and “Call It What You Want” is right up there with the others, with gorgeous, exposed vocals that are really exceptional. “King Of My Heart” also starts hopeless (I’m perfectly fine/I live on my own/I made up my mind/I’m better off being alone) but turns to dewy-eyed (And all at once/you are the one I have been waiting for/King of my heart, body, and soul), and despite its occasionally dubsteppily awkward riffs, it’s a winner.

But the not-breaking news is that this album is not perfect, and I could have done without some of the tracks. Some people love “Gorgeous,” a thinly-veiled coy-boy ode to her new beau, but I’m not one of them, and the tongue-in-cheek “This Is Why We Can’t Have Nice Things” serves as a subpar iteration of “We Are Never Getting Back Together” with some singalong parts, but that’s not really my speed.

“New Year’s Day” pulls a classic Taylor trick by closing the album with a softer and melancholy track (see “Clean” from “1989” and “Begin Again” from “Red” as exemplars). Interestingly, it will be released as a country single, to which I say, ehhhhhh, really? I didn’t love it, but then again I didn’t love its predecessors save the aforementioned “Begin Again.” Decide for yourself.

Finally, part of me is sad that this is an album bereft of legit anthems. When Taylor 3.0 shows up in a few years and this album fades to a dimmer shade of diamond-encrusted platinum, you won’t be searching for old videos of “Ready For It” or humming along with your kids to “Delicate” like you do today with “Love Story,” “22,” “You Belong With Me,” or even “New Romantics.” This isn’t a bust-out-in-group-sing album; it’s a deep dive into the soul, and one you’ll be listening to with your ear buds instead of the car radio throughout this winter of discontent. I downloaded this album last week en route to New York for the day and have basically looped it nonstop since then, given the fact that the world is falling apart everywhere…but at least we still have Taylor.