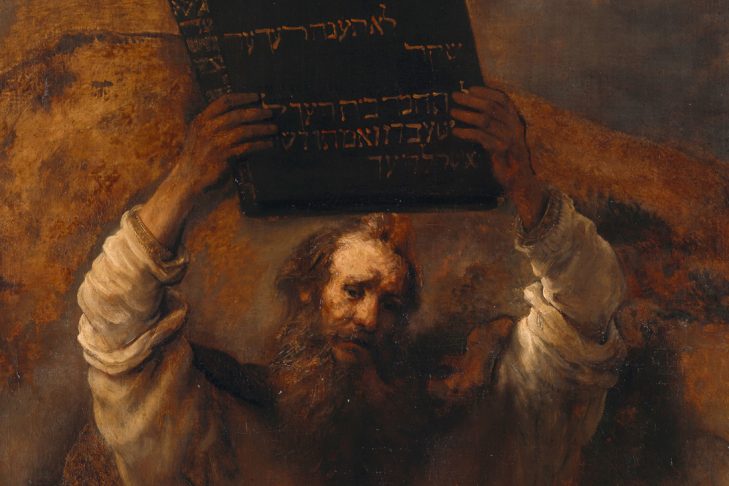 “Moses Smashing the Tablets of the Law” by Rembrandt

The Ten Commandments are the cornerstone of Judaism. Torah teaches that the stone tablets containing the commandments were given to us after we escaped Egypt, crossed the Red Sea, and arrived at Mount Sinai. Like the manna that sustained our bodies as we wandered in the desert wilderness, the tablets sustained us as we emerged as free people and navigated the unknown of how to create an ethical society.

Yet, perhaps even more important than what is written on them might be how they were written. The Ten Commandments were written not once, but twice. The first set, given to Moses atop Mount Sinai, was “inscribed by the finger of God” (Exodus 31:18). Yet, coming down from the mountain with the tablets, Moses famously sees the people worshiping the Golden Calf and casts this first set of tablets to the ground, shattering them into pieces (Exodus 32:19).

In this week’s parsha, Moses and God give it another go. Moses makes a second trip up the mountain to convene with the Divine and replace what had been destroyed. We read:

And God said to Moses: Write down these commandments, for in accordance with these commandments I make a covenant with you and with Israel. And he was there with God forty days and forty nights; he ate no bread and drank no water; and he wrote down on the tablets the terms of the covenant, the Ten Commandments (Exodus 34:27-28).

The first set of tablets were clearly written, as Torah tells us “by the finger of God,” but what of this second set? This question of who scribed the second set of stones vexed the ancient rabbis. Classical commentators including Rashbam, Ibn Ezra, Ramban, and Rabeinu Bachya argue, passionately, that it was God who wrote the words. In his commentary, Rabeinu Bachya conveys the distress he feels at even imagining it could be otherwise. He writes, “The subject of these words is God, of course, not Moses, God forbid!”

Yet, to make this assertion is to read against the grain of the text. While there are multiple mentions of “he” in verse 34:28, the statement, “And he was there with God forty days and forty nights; he ate no bread and drank no water,” clearly refers to Moses. In his article, “Who Wrote The Ten Commandments?,” professor Benjamin D. Sommer, drawing on the work of the Karaite biblical commentator Abū al-Faraj Hārūn ibn Faraj, points out that “in a series of verbs, the subject remains the same unless a new subject is introduced.”

The plain meaning of the text, then, is that Moses, not God, wrote the second set of tablets. And so, we must ask, why did so many commentators work so hard, go through such mental gymnastics, in order to read the verse as God writing the tablets, and not Moses? What was so challenging, so threatening, so hard to imagine about the possibility that it was, in fact, Moses who inscribed the stones with the words that would endure for generations? Why, in Rabeinu Bachya’s words, “God forbid”?

Putting ourselves in the shoes of our rabbinic ancestors, we can imagine. If it were Moses who wrote these words, they may not have been seen as binding, not adhered to as foundational aspects of what it means to live an ethical life of sacred service. What we today see as fundamental tenets of Judaism could have been ignored or discarded as simply the whim or inclination of a great, but flawed, leader, rather than the directive of an all-powerful deity. Were it Moses who wrote the tablets, we might easily say he got something wrong or missed something essential in the transcription process, which could lead to the community debating the merits of the instructions and even splintering into factions, causing an unraveling of the community.

But, more than any of these, it would mean that the foundational teachings we received were not simply given by God, but, instead, that revelation was a co-creation between the Divine and human beings. Perhaps even more than what’s written on the stone tablets, we are meant to learn from this parsha the importance of the process by which they were created: Divine-human partnership. For, while the first set of tablets, inscribed by God, shattered, it is this second set, created in collaboration, that endures.

God, it seems, not only permits, but celebrates this turn of events. Midrash teaches that after shattering the first set of stones, Moses started feeling badly that he had broken the tablets. God comforts him, saying: “Do not feel bad about the first tablets, for they only contained the Ten Commandments, however, the second tablets I will give you will have halacha, midrash, and aggadah” (Exodus Rabbah 46:1).

That is to say, the second set contains not only what God transmits to us, but also our unique human interpretations, imaginings, and improvisations on the Divine word. There is nothing to feel bad about in breaking that first set, God assures Moses, for it is the second set that was meant to endure. With our voice included alongside the Divine word, we are given not only revelation but also its ongoing source of renewal. Embedded in this second set of stones is the potential for future transmissions through halacha, midrash, and aggadah. These stone tablets can be conceived of as touchstones of transmission, alive and emanating through the ages.

After inscribing this second set of commandments, Moses returns to the people elated and illuminated, as the text says “the skin of his face was radiant” (Exodus 34:29). Something within him had changed. Moses was no longer just basking in the light of God. Rather, through the co-creation of the tablets, he became lit up from the inside. Co-creation with the Divine is a sacred act available to all of us, one that illuminates us from the inside out and allows our light to shine out into the world.

In his seminal work, “Halakhic Man,” Rabbi Soloveitchick writes that each of us received the Torah from Sinai, “not as a simple recipient, but as a creator of worlds, as a partner of the Almighty in the act of creation.” The second set of tablets are a physical reminder of revelation as an act of co-creation. In this time of change and renewal, may we honor the concern of our rabbinic ancestors and their desire to protect the sanctity of the commandments, while at the same time fully appreciating Moses’s role as co-creator of the enduring nature of these teachings. May we each accept the challenge of co-creating the continual unfolding of our moral guidance toward a just world. And, in so doing, may we become, like Moses, radiant, shining our light out to the world.

Entrepreneur and artist Rabbi Adina Allen is the co-founder and creative director of the Jewish Studio Project, a national organization that cultivates creativity as a Jewish practice for spiritual connection and social transformation. She is a 2014 graduate of the Rabbinical School of Hebrew College.